“You and me against the galaxy – just sweat, blasters and good times.” 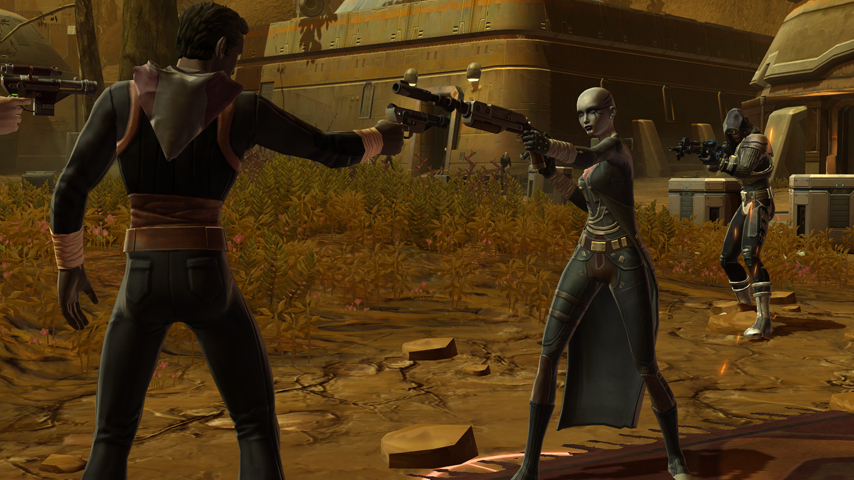 Welcome to our first Companions 101 blog! While traveling through The Old Republic™ galaxy, you will encounter a variety of companions that can join your crew. This weekly blog is meant to be supplemental to our Companion Holonet series and it will provide insights and tips for each companion as well as a wallpaper and screenshots of their customizations. Each week, we will rotate between Imperial and Republic companions. Let us know who you would like to see featured in future blog posts by posting your suggestion in the official forum thread for this blog post. Blasters ready? Let’s go!

Every secret agent needs a femme fatale. Surrounded by mystery and quick with a blaster, Kaliyo Djannis fills that role perfectly for the Imperial Agent class story. Raised on Rattatak, Kaliyo was taught at a young age to admire power, strength, and glory above all else. Since leaving her home world, she has attached herself to crime lords, card sharks, and bounty hunters, until she has proven that she can best her partner. Kaliyo may claim to watch your back, but keep in mind that she has no problem sticking a knife in it either.

Your first encounter with Kaliyo takes place on Hutta. She is in the employment of Nemro the Hutt, but quickly growing bored of the crime lord and is ready for the next challenge. Kaliyo catches on that there is more to the Agent than meets the eye and decides to investigate the Hutt’s new guest further. 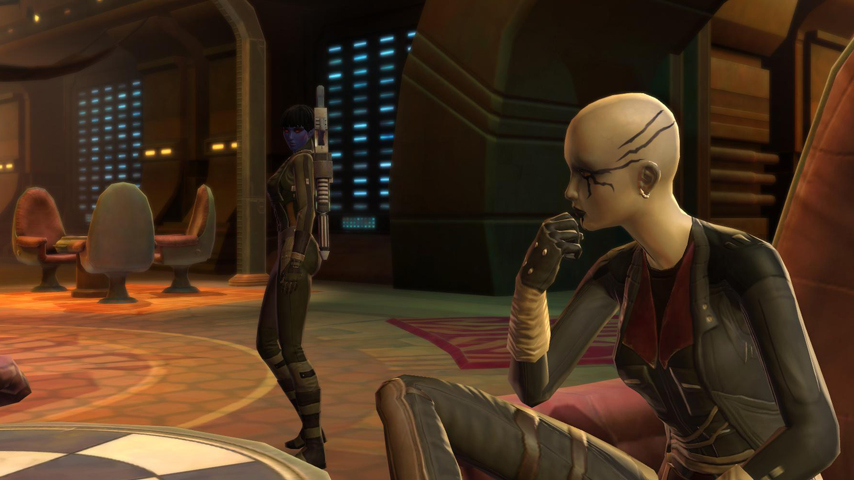 “Sit down, Blade. Stay with me awhile – we haven’t had the chance to talk.”

Kaliyo makes it a point to let the Agent know she isn’t easy to impress. So what is it about the Agent that makes her want to join his/her crew? We sat down with Lead Writer, Alexander Freed, to shed some light on why Kaliyo decides to leave her comfortable life on Hutta and associate with Imperial Intelligence:

“When Kaliyo first joins up with the Imperial Agent, she sees two possibilities. Either the Agent is a mark--someone whose coattails she can ride, someone who's going to diligently follow orders while Kaliyo plays him (or her) for every credit he's worth--or the Agent really is as clever, confident and manipulative as he lets on. In the former case, the Agent is worth Kaliyo's time for the money and adventure alone--at least until she gets bored. In the latter case, Kaliyo sees a challenge, someone who'll be fun to match and toy with on a level she rarely gets to play at--and if it gets her killed, well, it'll at least be a rush while it lasts.”

Each of the companions you meet in The Old Republic has their own personality quirks, likes, and dislikes. While some are more complicated than others, they all have their shades of gray when it comes to morality. Kaliyo Djannis is a complex character, sometimes decisions you think will please her does the opposite. Her loyalties lie more with herself than the Empire or the Republic. The best way to gain Kaliyo’s affection is understand her motivations and try to always be one step ahead of her. But if she has no loyalty to the Empire then why does she continue to stay by the Agent’s side? When I asked this question to Alexander Freed, he reminded me to think of her past:

“Kaliyo's worked for a lot of people in her life, but most of them have been in disreputable lines of work--and while crime pays well in good times, it's less glamorous when things go sour. Joining the Empire means a very large paycheck and a chance to use all the resources of Imperial Intelligence. (Kaliyo has a lot of enemies, and a spy agency is just the thing to help her clean up.)

Of course, the other part of it is that the more the Empire leans on Kaliyo, the more she can twist and manipulate her superiors. Kaliyo is an anarchist at heart, and she takes perverse joy in working for the Empire and taking advantage of her situation while it lasts.”

When bringing Kaliyo along on missions, keep this in mind. She loves anarchy and respect – but she will always have an ulterior motive. Play her at her own game and keep her guessing. The minute Kaliyo becomes bored is the minute she either stabs you in the back or disappears from the ship… with most of your credits. 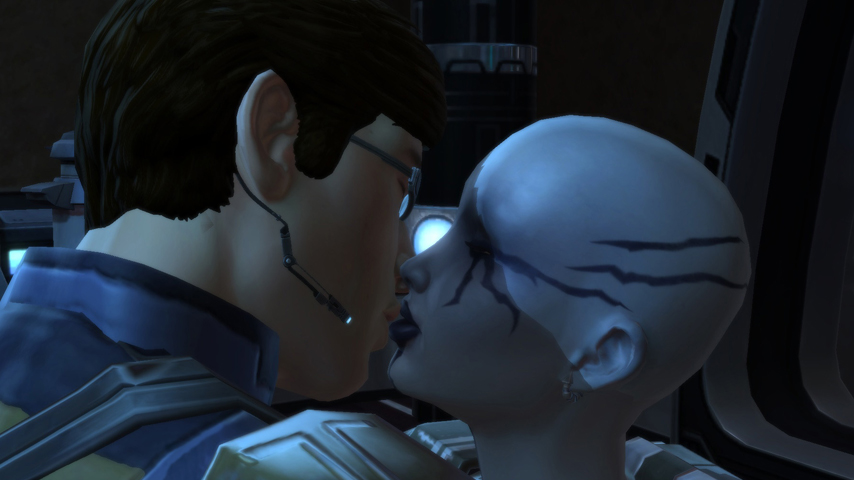 “I was thinking we could slip off the ship, and celebrate your birthday.”

While alluring, Kaliyo isn’t exactly the damsel in distress, more like the damsel causing distress. Her promiscuity is hardly a secret, so is it really possible for the Agent to truly tie this Rattataki down? Freed’s advice for those daring enough to try to romance Kaliyo is to once again remember her motivations and her history:

“Kaliyo's romantic history is a troubled one. For her, relationships exist to be used, and when they stop being useful, there's no point to continuing the relationship. "Loyalty" and "commitment" aren't really things that enter her mind, although she generally knows the value of discretion.

Any attempt at a serious, long-term romantic relationship with Kaliyo is going to hit problems. Probably lots of problems. Any romantic partner who can put up with Kaliyo through the many, many bad times, however... well, it's hard to know what he'd find. She's never stuck with anyone that long.”

Deciding to take on a serious relationship with Djannis will not be easy. However, for those Agents daring enough to try, the Rattataki will be a memorable partner in crime… at least for a little while.

Life on the X-70B Phantom

When Kaliyo signed joined the Agent it was just the two of them against the galaxy (with monetary backing from the Empire, of course). But she soon has to start sharing the ship with new crew mates. Kaliyo isn’t the “let’s all be friends!” kind of girl. Like when she first meets the Agent, she sizes each of the new crewmates up and decides whether they are a mark or a challenge. Freed gives some more details on some of her thoughts on the other companions:

“Kaliyo doesn't make friends easily--so far as she's concerned, she and the Agent are the only members of the crew who really know how life works.

Kaliyo has a grudging respect for Vector--she can't bait him, can't get a rise out of him, and that makes him an idiot, utterly confident, or both. At first, she's a little creeped out by his status as a Killik Joiner, but she learns to write off Vector as just kind of weird. Not someone she's ever going to be pals with, but if she had to trust someone on the team other than the Agent, it would be Vector.

Kaliyo and Doctor Lokin are on rockier ground. Kaliyo doesn't trust Lokin (and who would?), and anyone that friendly and that smug has to have something up his sleeve. Still, both Kaliyo and Lokin enjoy practicing lying to one another, which gives them a shared interest.

Temple is a mark--someone Kaliyo thinks she can manipulate for her own purposes. In fact, Temple's a lot smarter than Kaliyo gives her credit for... but she's also smart enough to humor Kaliyo sometimes. And so long as Kaliyo gets what she wants, she's happy.

Kaliyo tries not to think about SCORPIO.”

The Many Faces of Kaliyo Djannis

Companions have always been an important aspect to BioWare games and it is no different with The Old Republic. However, since SWTOR is an MMO, the developers felt like a feature had to be added so that the player felt like there was uniqueness to their companions. This is where companion customizations come into play. These customizations are purely aesthetic, leaving your choices in game to influence your companion’s personality, but is a great feature to further shape your own Star Wars™ adventure.

Kaliyo has eight standard customizations to choose from – check out the screenshots below!

Show your love for this Rattataki mercenary with some of these Kaliyo wallpapers! Although she would never tell you so, Kaliyo would be flattered! 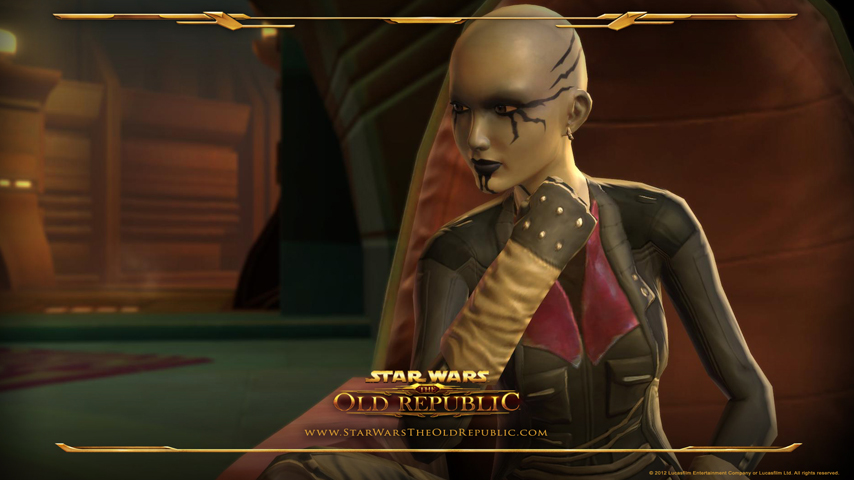 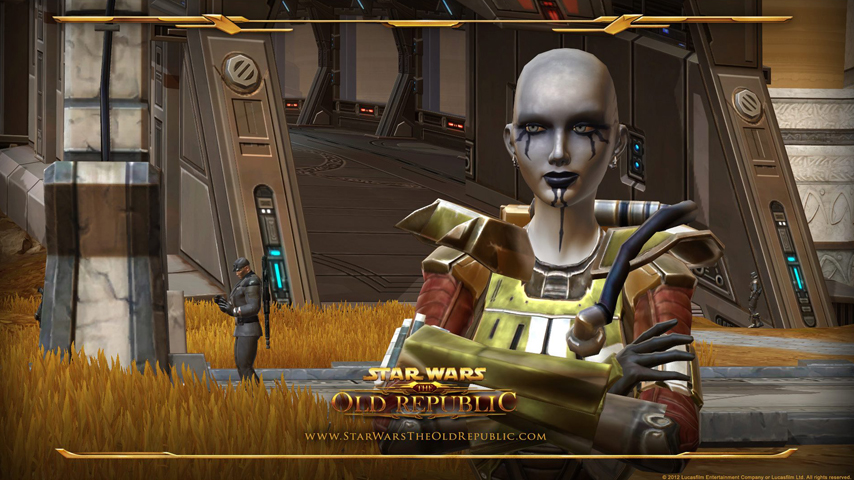 Love Kaliyo? Share your favorite Kaliyo moments in this thread.

To find out more information about Kaliyo including statistics, background, and her gift preferences, check out the Companions page on the Holonet!