In specific areas outside of the main character story, players can face off against each other in exciting Player-vs-Player combat. Whether alone or teamed up with others, players can battle each other through intense ground combat or take the fight to space in epic dogfights in their own customizable starships. 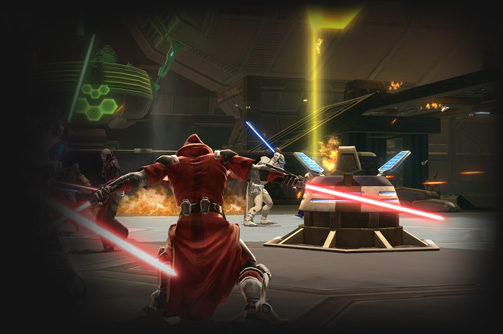 Warzones in Star Wars: The Old Republic are instanced areas where Imperial and Republic forces battle each other in Player-vs-Player combat on the ground in planets throughout the galaxy. Players from each side enter the Warzone and then compete to defeat other players and accomplish the mission they’ve been assigned. To emerge victorious, players will have to work together strategically, leveraging their strengths and exploiting their enemies’ weaknesses. Different maps will require different objectives to be met to come out victorious, ranging from capturing strategic points to simply eliminating all players on the opposing team.

At the end of each match, the winning team will be recognized, and individual players on both sides will be rewarded according to their contributions to their respective teams.

Regular Warzones make up the majority of player vs. player matches. Victory is achieved by completing various objectives.

Arenas are a Last Team Standing Warzone in which you have only one goal: to eliminate all players on the opposing team.

Players looking for even more of a challenge can compete against players of a similar skill level by participating in Ranked Warzones.

Galactic Starfighter lets players take part in free flight dogfighting and jump into fierce factional battles as the war between the Sith Empire and the Galactic Republic explodes into space. Players can compete and advance to earn ground game rewards plus new weapons, powers and abilities to customize their Starfighter.

Battles take place in unique locations with different objectives to meet. Fight enemy Starfighters in both space battles and in the skies above various planets. Battle take place as different Battle Types, Team Deathmatch and Domination.

Team Deathmatch pits two teams of players against each other in deadly combat to determine which team can rack up the most kills. In Domination you fight to gather up and satellites and to control the area while defeating enemies in the process. Enemies include not just opposing players but also defense turrets near captured satellites. The team with the most satellites at the end of the match is the one that emerges victorious!

Players can take part in a variety of roles with different Starfighter ships, each with their own advantages and disadvantages. As players progress they’ll earn upgrades and customization options for each of their ships to build the ultimate Starfighter.

Specialized in using proximity mines and automated drones to defend and support its team, the Bomber is a tough ship with the strongest hull of any starfighter role.

As the heavy firepower of a starfighter squadron, gunships dispatch enemy vessels at extreme range before they can retaliate.

Fast and agile, scouts are designed to quickly investigate contested regions and capture critical objectives before the enemy can react.

Whether dogfighting or targeting large mission objectives, strike fighters use a wide array of powerful weapons to eliminate their foes and are built for one purpose: direct combat.

As you progress through matches, you’ll be able to gather different variants of each ship type with components and abilities that further define your role in battle. Advance and earn valuable requisition, a unique type of currency that you can use to unlock new weapons, powers, abilities, and more.

Customize your starfighter with various components including engines and weapons that offer a wide range of exciting abilities, maneuvers and appearances.

Make your Starfighter stand out with new paint jobs, blaster colors, and engine trail colors available in the Cartel Market and directly from your Hangar Interface.

Fight with your ground game Companions or choose new Crew Members available as part of Galactic Starfighter, each with their own unique set of abilities. Assign one of your Crew Members to be a copilot to leverage their active abilities. The remaining members are your Support Crew and provide passive ability bonuses much like a stat boost.