Star Wars: The Old Republic is a story-driven online game set in the Star Wars™ galaxy, during an age where the galaxy is on the brink of war. In the game, you create your own hero based on the classic Star Wars roles, including Jedi Knights, Sith Lords, Bounty Hunters, Smugglers, and more. Embark on an epic personal saga, facing great challenges and making decisions that determine your path down the light or dark side of the Force.

As you journey across the galaxy, you will find countless missions that you can undertake to help you gain experience points and advance your character. These missions not only play a role in your Class story but also will help you uncover new adventures and discover the history of whichever planet you are currently stationed.

The core content of Star Wars: The Old Republic is the story, and there is always more to discover. Story Missions will be your primary path as you discover new worlds, characters, and more. Take part in both Class Missions and repeatable Chapters, both of which feature an interactive storyline with cinematic dialogue and full voiceover for all in-game characters.

Class Missions are missions that directly tie into the advancement of your personal Class storyline. When starting a new character, you'll have the option to choose from one of 8 main classes. Each of these classes will have their own unique storyline to play through with their own missions. After completing a Class Mission, the story will have move on and so will not be repeatable, so any actions made will be permanent and affect the rest of your journey.

After completing your Class Storyline, your journey will continue in multiple Expansions. Rise of the Hutt Cartel, Shadow of Revan, Knights of the Fallen Empire, and Knights of the Eternal Throne will have single storylines that all Classes can take part in. Like Class Missions, after you complete missions in Rise of the Hutt Cartel and Shadow of Revan any action you take will be permanent and move the story along and so will not be able to repeated. 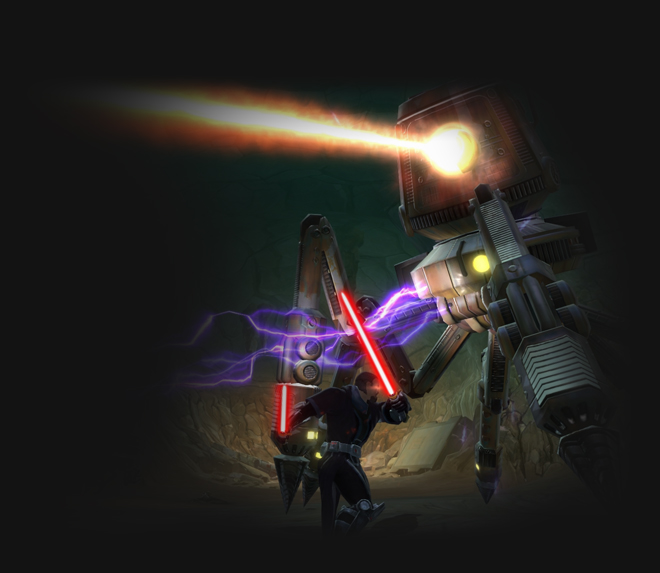 The galaxy is filled with perilous adventures, some of which are simply too dangerous for you to tackle on your own; you will need to group together with your allies in order to take on some of the most challenging missions in the galaxy! These missions are called “Flashpoints,” and they first become available to you in your Fleet Lobby when you leave your Origin World. Flashpoints are stand-alone, story-driven missions that call on a group of players to band together in order to complete. Throughout each Flashpoint, you will have to make tough decisions that impact who you fight, how you fight and the ultimate outcome of the story!

Non-Critical Missions do not directly tie into your character's main storyline, but still play an important role in the overarching stories of each individual world. These missions are marked in the game by a triangle with an empty center. Some of these missions are classified as Heroic Missions, and have you facing more powerful enemies , and often require you to take your companion or another player to complete it.

As you travel the galaxy and discover new planets, you find each planet has their own history and story to learn about through Planetary Missions. These Missions will find you getting involved in everything from a planet’s politics and local law enforcement, to criminal organizations or shady business deals. While the scope of these missions will vary, they will branch off and take you deep in to new areas that may not be in the main storyline, allowing for more discoveries and you explore each world.

As you discover new outposts and hubs, Heroic Missions will become available from characters and terminals. Heroic Missions are slightly more difficult than regular missions, and often will need to be completed by groups of two or more. With the increased difficulty comes greater rewards, as experience, credits, and loot are much better than those found in regular missions.

You’ll meet many new and interesting characters in your travels, and many will have jobs for you or just need your help. Exploration Missions will provide opportunities to learn more about the inhabitants on worlds, with short missions ranging from solving small crimes, rescuing loved ones, or just making deliveries. These missions are hidden by default, but can be activated at the top right of the Map Window.