The next game update for Star Wars™: The Old Republic™ includes a handful of key changes to crew skills and item tech that we want to share with you.

Adaptive gear is a new kind of armor weight. When you equip Adaptive armor, your character will use it to maximum effect, gaining the benefits of the highest armor weight you can equip. Adaptive armor also works for companions, utilizing their best armor weight. This allows every class in the game to use the social gear sets without being penalized, and without having multiple sets of gear just to set a different weight. With the introduction of the Adaptive armor system in Game Update 1.3, we’re rolling out these social gear sets with the Adaptive weight:

All existing items will be updated, so if you have already acquired them they will show the adaptive weight in 1.3.

Prior to Game Update 1.3, it was only possible to create an Augmented item through a critical crafting success. Augmented items have an additional mod slot, conveniently called an augment. Some of the most valuable items in the game right now are orange shells that have been crafted with an augment slot unlocked, because they have exceptional stat potential with their full complement of mod slots. While these items are cool, they are indicative of a systemic inequity between different types of items. That’s where Augment Tables come in.

Although we call them Augment Tables, it’s actually just an update to all the Item Modification Stations you can already find spread throughout the world. These stations provide a new way of adding an augment slot to an item. Since lots of questions come up whenever Augment Tables are mentioned, I’ll try to explain the system by providing those questions and their answers:

What can you augment?
You can augment any equippable item of at least Premium quality. This is pretty much everything in the game except some low level junk loot.

You can also upgrade an augment slot to a higher MK-# at a Modification Station. 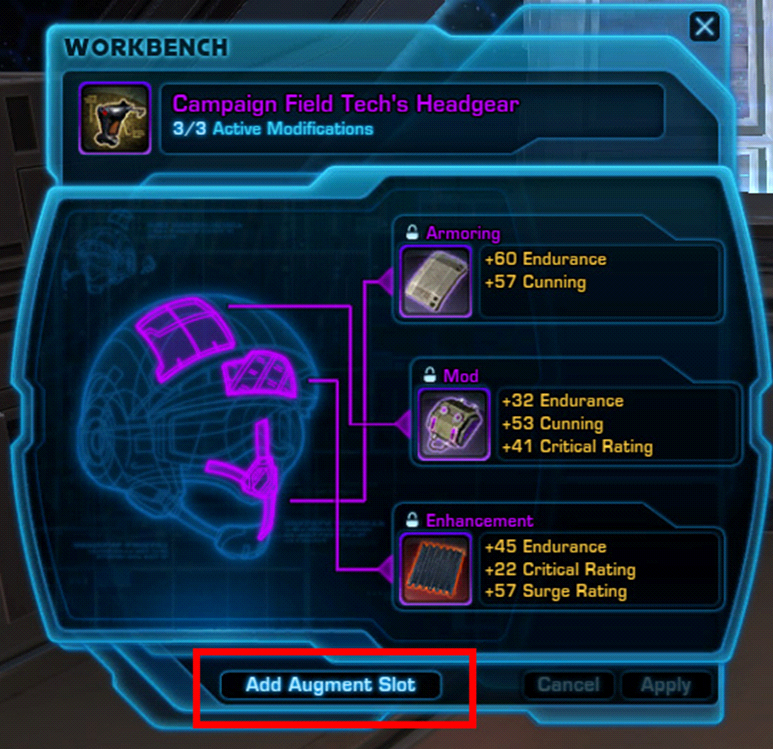 What do I need to add an augment slot? How much does it cost?
Credits: A flat credit cost to add or upgrade an augment. Credit costs are still being tuned, but it will be less than 50k for the highest augment slot.

Augment Kit: An item produced by Armormechs, Synthweavers and Armstechs. Augment Kits require 10 Augment Slot Components of the appropriate MK-#. Components are acquired by Reverse Engineering any item that can be crit-crafted to add an augment slot. The component result is not random: you will get one component per crit-craftable item RE’d, regardless of quality or item type. The component is an addition to the current RE results, so it will not replace any of the materials you currently get from RE.

Any tier of augment slot can be applied to any item. The MK-# just restricts which augments can be inserted into the item. We will periodically add more levels of augments and augment slots.

What happens to my existing items?
If the augment slot is empty, it will get an Augment Slot MK-# based on the level of the item. This will be the same slot it will receive if you crit craft the item after 1.3.

What about my social gear?
Since Augment Slots can be added to all equipment slots and all gear at Premium quality or greater, this means social gear can be augmented.

How do augment tables fit in with the long term goals for itemization and crew skills?
Augment Tables are a great example of some of our goals for modifications, crew skills and itemization in general.

Customization: We want to give players more control of their stats and appearance. We want players to be able to choose what gear they want, and avoid or eliminate cases where players are forced into specific choices due to arbitrary system rules.

Refreshing Crew Skills: We don’t plan to let the crew skills stagnate. We’re constantly looking for things we can introduce to crew skills that are relevant and interesting.

Integrating Crew Skills: We’re working on integrating crafting with the general itemization and progression experience, without also requiring players to take any specific crew skill. Crew skills should be part of the process, but that doesn’t mean your Force user should be required to take Synthweaving.

More open markets: We’re opening up more avenues for market activity with fewer restrictions. The crystal sale event was another example of this: we offered time-limited goods that fell outside of the normal distribution that weren’t bound to your character.

Consistency and transparency: I don’t want you to ever try to augment an item and then find out you can’t and not understand why. It’s important that our systems are applied consistently and in an easily understood manner. The more consistent and transparent the system is, the easier it is to add depth while making it easy to use.

What drove this change?
This system in general is something that we’ve wanted to see since before launch, and we’ve only recently hammered out the details and got it in the game. Mods are intended to give players more control over how they approach their gear while also encouraging players to build a connection to their items. There’s something really cool about being able to take the lightsaber you make on your Origin World and just keep upgrading it to stay with you the entire game.

With the launch of 1.2 on PTS and live, we received very strong feedback and data that aligned with our long-term goals for the modification system. That feedback helped drive the addition of Augment Tables and get them into the game sooner. There are currently too many restrictions on what actually works for gear, and that creates a poor experience, so we’re taking steps to address some of those issues.

To accompany the release of Group Finder, Game Update 1.3 includes a moderate update to the loot distribution in endgame Flashpoints. This is a partial re-itemization, so it utilizes primarily existing gear. The loot contents of almost all the endgame Flashpoint bosses have changed, with a few exceptions. While it may change on an individual case, here’s an overview of how the loot drops work now. Since this is an overview, it doesn’t include lots of the supplemental drops like tokens, rare items and schematics:
General Criteria

With the major changes out of the way, there are also a few smaller item updates in 1.3: That covers most of the changes you’ll see for items in Game Update 1.3. We look forward to seeing how these changes develop in live, and we’ll be keeping an eye out for your feedback and game data to see where we go next!