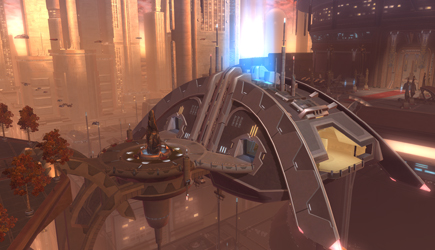 Welcome to this week’s Community Round-Up. Every week, we highlight some of the most interesting discussions in the community as well as player-created events happening on certain servers in The Old Republic™. While most of these discussions occur on our forums, we also try to look at what people are saying about Star Wars™: The Old Republic™ on other sites whenever we can. This week we have added a new section to the Round-Up focusing on discussions taking place on the SWTOR subreddit on Reddit. Please feel free to nominate discussions found on the subreddit along with your favorite forum threads and server events!

If you have suggestions for next week’s Round-Up, please nominate them in this thread. Please remember the Community Round-Up blog is meant to highlight interesting, productive discussions and server events - not the most talked about forum threads.

Get to know the community on your server by participating in player-created events. Below are some occurring this week! Be sure to check out the Server Forums to find other events happening on your server.

We are adding a new section to the weekly Round-Up highlighting some of the interesting posts on the SWTOR subreddit on Reddit. If you haven't visited this subreddit before, it's another great place to learn new things from other players and to discuss The Old Republic.

If TOR was a movie, who'd play as your character?: Thanks to MrSchmo for this nomination! In this thread, tell us which actors or actresses would play your character in a hypothetical SWTOR movie.

Planet suggestion thread: Thanks Vitas for this nomination! Now that Makeb has been revealed at E3, Vitas has put together a list of planets (complete with Wookieepedia links!) and asks the community which ones they would like to see in The Old Republic. Some of your answers included:

Please Note: Below contains SPOILERS for the story of The False Emperor Flashpoint.

Solo HM Darth Malgus: A truly impressive feat, Chaori was able to solo hard mode The False Emperor. Chaori now plans on soloing every hard mode Flashpoint boss. Post in the thread to recommend who Chaori should slaughter next or shower them with praise.

SWTOR Animated Series: Exen has posted this amazing video about “the Galaxy’s unsung heroes: The Vendors.” Dealing with wannabe Siths is harder than it looks.

Which romance is best written?: Halinmonk asks the community which romance arc is the best. Some of your answers included: