Star Wars: The Old Republic – State of the Game #2 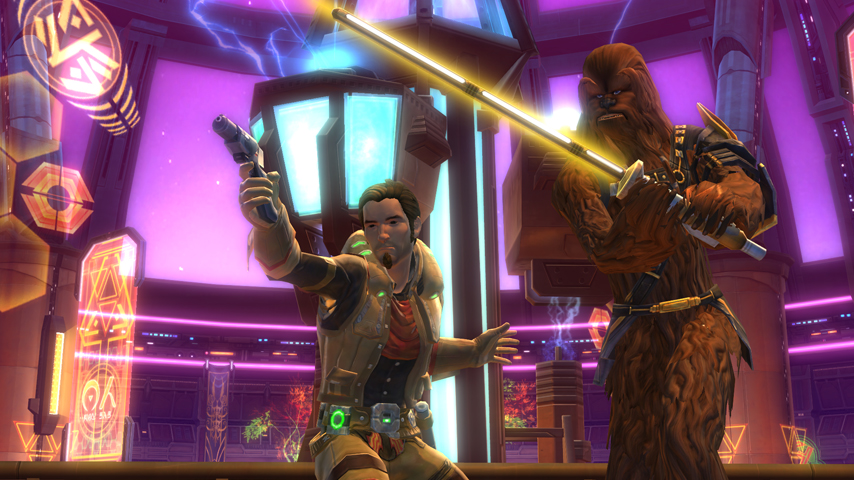 It has been an amazing couple of months since my last State of the Game blog. It feels like a good time to jump in again and give you a brief rundown on how we are doing, what is coming up next, and to tackle some issues head on. Let’s start with some comments about now and the future:

As you can probably imagine, the launch of the Free-to-Play option with our new Cartel Market has been an amazing event for our game. The game is incredibly healthy with an ever increasing number of players who are actively playing (the servers are rocking!). Having said that, we know we haven’t gotten everything perfect, and we are still working hard to make The Old Republic everything you guys desire. More than anything we wanted to get folks back in and playing the game, and bring back the excitement and camaraderie - we feel like we've made great strides over the last 6 months towards these goals. All signs point to a very bright future for our game!

Speaking of the future – we have two excellent updates coming your way in the upcoming months. In our Game Update 1.7 you should look forward to some interesting changes to a special PvP area that you have all been asking about (sorry for being cryptic, but this is technically not announced yet), as well as a visit from some old friends, The Gree Enclave (though maybe not in a way you would expect). And later in the spring, our Digital Expansion: Rise of the Hutt Cartel! The team has been working for a long time on this, and is very excited to get it out to you. We have greatly expanded on the original concept with several new systems, 5 new levels, a big new planet, new storylines, new skills and abilities and more beyond that. Keep your eyes open for more information over the next several months.

Now for everyone’s favorite section – Hot Topics. I will try to be as frank and open as possible.

Topic #1: Elder Game Content – What is our intent for keeping level 50’s occupied? Answer: Introducing new content and activities for the elder game is a top priority in the coming year. We’ve got new Operations, new Flashpoints, new difficulty modes, new PvP areas, and of course, the entire Digital Expansion: Rise of the Hutt Cartel (which is targeted at our high level players). We have a plan mapped out for the upcoming year that will keep the elder game fresh and interesting for players of all types. Overall, we’re aiming to introduce a more diverse array of activities – more stuff to do with your Companion, more challenges to tackle with groups, and more reasons for guilds to recruit. We’ll also be improving our itemization, introducing new incentives to revisit existing areas, and a lot of other exciting things that will be revealed as we move through the upcoming year.

Topic #2: World PvP – What happened to making Ilum better? What is going on with Open World PvP? Answer: We have not forgotten Ilum! I think you will see (fairly soon) the answer to this question in the game itself - something big is coming to the Western Ice Shelf, but it’s quite a departure from what was there before. As for pure Open World PvP…well, that’s a more difficult proposition. We are dedicated to providing excellent PvP experiences to our players, but we intend to focus our energy on PvP Seasons and new Warzones. We will be experimenting with a different approach to Open World PvP, something that encourages organic PvP in contested areas in a new and interesting way, but do not look for massive new Open World PvP this year (outside of what I mentioned above). It is still on our design wall, but is taking a back seat to other forms of PvP.

Topic #3: Character Copy to Public Test Server (PTS) – What is taking so long? Answer: As of the writing of this letter, we are in focused, internal testing on character copies for PTS. You should expect to see this come within the first part of this year. It will provide free character copies to PTS at any time (with possible restrictions dependent upon our testing needs at any given time). This will also lay the foundation for our new live character transfer system that will be coming later this year.

Topic #4: Same Gender Romance: Any news on this front would be great… Answer: First of all, I want to apologize that this is taking so long to get in the game. I realize that we promised SGR to you guys and that many of you believed that this would be with a companion character. Unfortunately, this will take a lot more work than we realized at the time and it (like some other pieces of content we talked about earlier in the year) has been delayed as we focused on the changes required to take the game Free-to-Play. As we have said in the past, allowing same gender romance is something we are very supportive of.

Secondly, I want to reveal today that we are adding SGR with some NPCs on Makeb and do intend on pursuing more SGR options in the future. More details to come!

Whew! I think we got through this State of the Game pretty well. The team and I will continue to scan the forums, read the boards, and listen to feedback. We’re dedicated to giving you the game that YOU want to play and are making changes and improvements at a rapid pace to keep up with your desires. Please keep posting and keep talking about The Old Republic. Together we will continue to care for and expand this fantastic game.