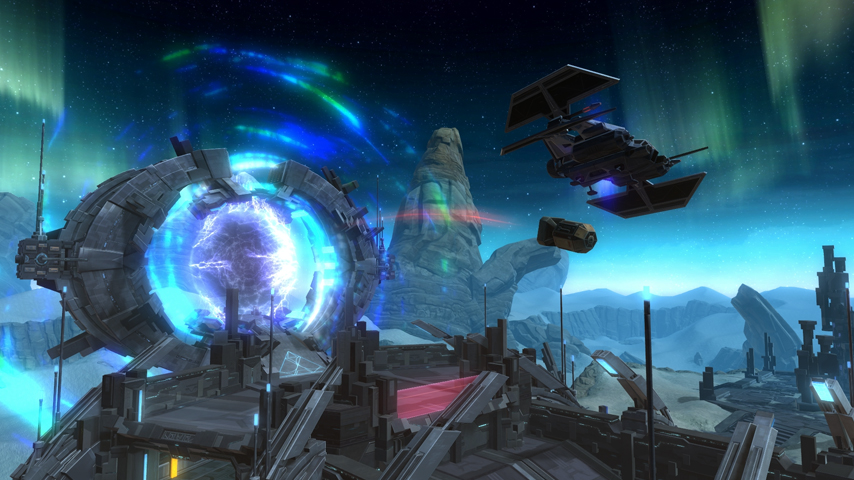 Today, I would like to introduce the public to our newest addition to Star Wars™: The Old Republic, the Warzone: Ancient Hypergate. This Warzone takes place in an ancient ruin built around a Gree hypergate. The Republic and Sith Empire are doing battle in an effort to control the area and claim the lost technology for themselves. Each of the factions have calibrated a gate that will allow reinforcements to be brought directly into the battle. These gates need to be charged up to full power in order to stabilize the connection and allow for safe passage. A nearby set of energy pylons have been brought online to achieve this goal, but they have been damaged in the fighting. They slowly build up to peak power and then discharge their stored energy into the connected gate. During this discharge, a large explosion is also released as the containment fields around each pylon fail. The only safe place is inside a bunker designed with a failsafe shield that protects from the violent explosion. 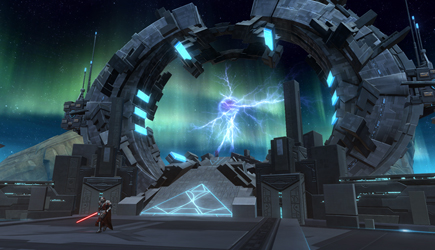 From a gameplay standpoint, Ancient Hypergate plays like a combination of a 2 point objective map, team death match, and a multi-flag game of capture-the-flag. Each of the two energy pylons is synchronized on a power cycle. At the end of this cycle, each pylon discharges energy into the gate of the faction that controls its objective point. Holding one or both of the pylons directly leads to gaining points at the end of each cycle. The amount of energy discharged is based on the amount of enemies defeated during that specific power cycle. The more players defeated, the more energy discharged into a gate! Additionally, the generators in the central structure of the Warzone release suspended energy orbs into the atmosphere. Players are able to collect these orbs and run them directly to an energy pylon. Getting near a friendly controlled pylon with an orb will immediately discharge a small amount of power directly into the gate.

Strategically, it is important for each faction to hold at least one of the energy pylons when each power cycle comes to a climax, as they are direct multipliers to how much power is discharged into the gate. Holding both pylons results in double the power, while holding neither results in no power discharged at all. After each cycle, each pylon sets off a large explosion that forces the players to either seek shelter in the failsafe shelter or be defeated. Once the explosion has finished, control of each of the pylons is reset and the power cycle begins anew. At the start of each new power cycle, the current count of players killed for each faction is reset and the amount of power gained for each kill and each orb capture is increased. This gives teams who are behind in the early cycles a way to get back into the game by performing exceptionally well in the later cycles when the stakes are higher. 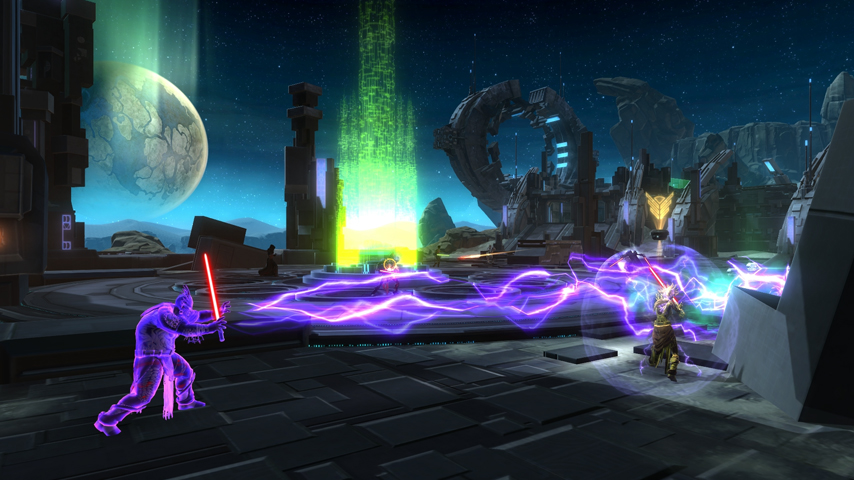 Ancient Hypergate should bring a slightly different PvP experience to players, while still maintaining the core of what Star Wars: The Old Republic PvP combat is all about. We hope that all players will be excited to get into the Warzone queue and try it out .

We will see you on the battlefield!