In the previous blog, Senior Game Designer William Wallace explained new improvements to companion characters in The Old Republic. Here, he delves deeper into AI and companions’ roles in a group.

Originally, our companions functioned almost entirely on their own, with only a few options for manual control. From both internal feedback and testing, we found that the integral nature of companions to gameplay in The Old Republic™ had many players wishing for more control over their companion’s behavior – they wanted more than what they had experienced in other massively-multiplayer games.

To address this, we’ve taken a page from other BioWare games and added AI toggles to each ability to control whether the companion should decide on their own when to use them, or whether they should be manually activated by the player. Players who are not interested in managing their companion can leave the default toggles on and let them run on autopilot. Skilled players can take complete control of the companion by expanding the companion bar onto their screen and using the abilities directly as though they were player abilities.

Many players will fall somewhere in between the two extremes, and will use the AI toggles occasionally to change the way their companion fights: 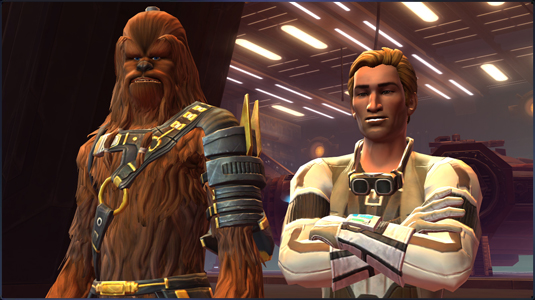 Finding certain roles for group content can sometimes be a difficult task in massively multiplayer games.

Star Wars™: The Old Republic™ features a large amount of group content, including Heroic Quests (challenging quests requiring 2 or 4 players to complete) and Flashpoints (highly engaging instanced story content for groups of 4 players). One benefit we’re seeing from our new, fully featured companions is additional flexibility about how players approach group content. A full group in The Old Republic always has four players. Any player leaving the group can be substituted by a companion of the group’s choice, with the party leader in control of which player gets to use their companion.

If a player leaves the group or its proximity, to travel to a vendor for instance, he is able to summon his companion for the journey. Upon reentering proximity of the group, the companion is automatically dismissed. The remaining group can temporarily substitute the missing player with one of their companions if desired.

A common situation familiar to MMO players is the departure of a member halfway through a quest or instance (As a personal example: I once abandoned a group in the middle of an instance when my washing machine caught fire. These things happen!). This could potentially ruin the game experience for all involved parties, but with the ability to substitute a companion in this situation, an experienced group of players will often be able to mitigate the impact of this event and continue their adventure.

While companions certainly don’t have the impressive AI to be able to mimic most human players, the option to micromanage a companion’s ability use on the companion bar in crucial battles will enable experienced groups to successfully complete their mission, even after losing a group member.

But don’t start dreaming about conquering the galaxy with an army of companions at your side just yet – Star Wars: The Old Republic is a massively multiplayer game, and as such it is a social experience as much as it is a story-driven BioWare role-playing game. While the majority of content in the game can be mastered by a player and their companion, some group content is a different matter. Flashpoints often require human coordination to successfully overcome challenges.

Take, for example, the fight we showed at PAX East, in which a group of players fought Captain Shivanek and his pet, Ripper. As we showed in the walkthrough video, the group had to split in two to complete this fight. As the first of several boss battles inside the Taral V flashpoint, it provides a moderately difficult challenge for a group of four players – three players and a companion will find this fight to be a far more challenging obstacle that may take several attempts to overcome. Two players and two companions may find it impossible altogether. 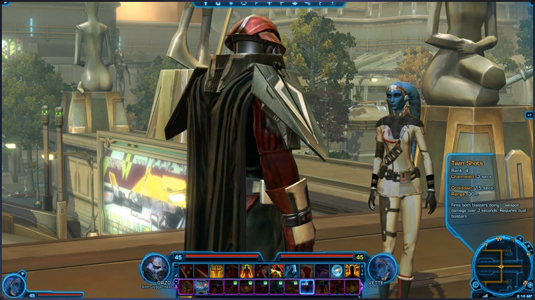 As our testing continues and expands, the companion system will continue to be polished and refined. We take our testing process very seriously, and have significantly altered our original companion design to respond to player behavior and feedback and to ensure that companion characters are a unique and fun part of The Old Republic.

Any specific abilities mentioned above are subject to testing and redesign between now and launch. We know that we have big shoes to fill when it comes to companion characters, and will continue to make improvements so that we deliver companion characters that meet and exceed your expectations; companions that you will come to know very well for years to come on your journey through The Old Republic.

Thanks for reading. I look forward to seeing you (and your companions) in game!