From Minsc and Boo to Urdnot Wrex, companion characters play an integral role in all BioWare stories. The same is true for Star Wars™. From Chewie to R2-D2, the heroes in the movies are often accompanied by a trusted partner.

Star Wars™: The Old Republic™ is no different. Each character class unlocks unique companions throughout their storyline; companions that fight alongside players in battle against AI and other players in Open World PvP, aid in crafting and non-combat missions through Crew Skills, and provide commentary on environments and engage in conversations.

As you advance your story in Star Wars: The Old Republic, you build relationships with your companion characters based on the decisions you make throughout the game. How you treat each companion and how you act when they are in your presence determines how your relationship with them evolves. The writing team has done a fantastic job of bringing these companions to life with compelling stories and backgrounds. They add an emotional layer to the experience in the same way that such memorable characters as Bastila Shan and HK-47 did in Star Wars®: Knights of the Old Republic®.

From a combat and systems perspective, though, which is what my team is tasked with, bringing BioWare-style companion characters into a massively multiplayer setting is a daunting task with many hurdles:

These are just some of the questions that needed to be answered to make the companion feature feel truly integrated with the game. We have been through several rounds of iteration and testing on companions to make sure we deliver the kind of experience you expect in a BioWare game. In making these changes, we believe we have also made the most advanced companions in any MMO to date.

Players should feel like their companion is unique. Since your companions have a full set of armor and weapon slots, you’ll see a lot of variety in their appearances over time as you equip them with new weapons and armor that you acquire throughout your journey. After months of testing and evaluating feedback, we decided that equipment customization alone wasn’t enough to create the visual contrast that our players expected. So we decided to incorporate an additional layer of personalization to the game.

Players will be allowed to override the starting appearance of the companion, granting them different looks by modifying hair, skin tone, eyes and other previously unchangeable physical features. Humanoid companions get a tremendous amount of variety from armor sets alone, but certain alien or Droid companions may not, so giving the player control of their companion's appearance was especially important to us. One of the more frequent requests we heard from our testers involved giving additional attire for the more fashion-aware Inquisitors who were offended by Khem Val’s sparse clothing options. 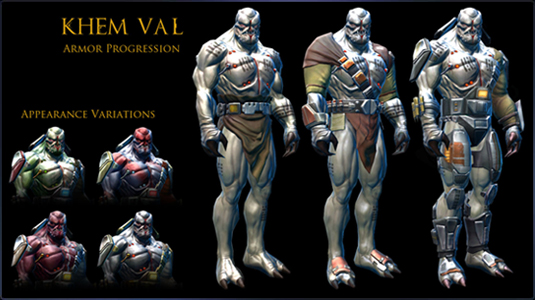 Even small changes help your companion stand out in a crowd. When we first started testing, clicking on another player’s companion would show their full name. This resulted in screens full of identical nameplates. Now, companions for other players appear anonymous to the player so that rather than seeing a bunch of identical nameplates, you now see “[Player Name]’s Companion.” Of course, for your own companion, you’ll still see the correct name.

Another critical component we’ve focused on relates to the combat abilities of the companion characters. When we first started testing The Old Republic, companion characters had one innate special ability as well as an ability that was given to them by the player. While players liked the mechanic, we felt it was too shallow and made the companions feel stale over time. We wanted to make sure that companions had the same depth of gameplay that BioWare fans have grown used to.

To that end we redesigned companions to give them each a specific class/role: ranged damage, melee damage, ranged tank, melee tank and support, each with a broad set of abilities that are unlocked as they level up alongside your character. Over time, your companion will feel more like a fully-featured character and less like a drone with one or two extra combat abilities.

Let’s take a deeper dive into one of the Smuggler’s companions, Corso Riggs, a heavily armored blaster specialist.

When first acquired around level 7, Corso already has the tools necessary to be an effective tank. His abilities include a Guard Stance that boosts his defensive capabilities and threat signature towards the enemy, a strong carbine attack that fires off a series of Charged Shots and a special distraction ability to taunt enemies into attacking him. 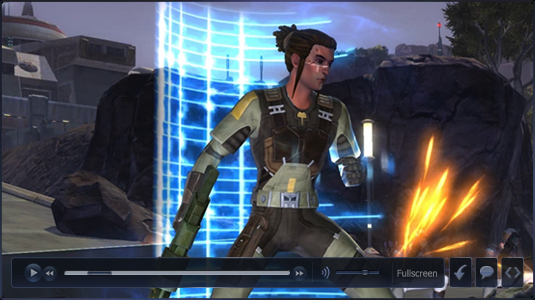 A while later, around level 25, Corso has picked up some new abilities that players can incorporate into his AI, including a powerful Fragmentation Grenade that can damage multiple targets, an EMP Blast that weakens nearby enemies and provides area threat generation, and a Grappling Line for pulling distant attackers in close. 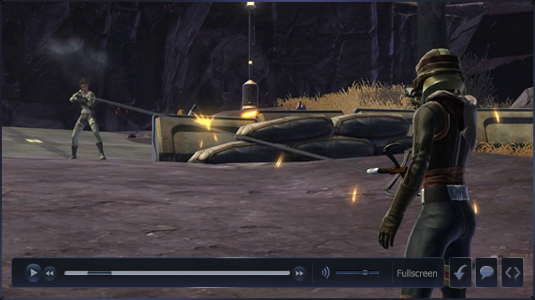 By the time the player reaches the high 30s, Corso has a full bar of abilities at his disposal that allow him to fulfill the role of the traditional MMO tank in both solo and group play, along with a selection of special attacks for damage duty. This includes a mode that makes him an effective ranged damage dealer, and a Flare Gun that will draw the attention of all nearby enemies as well as new shields and support abilities to aid the player in tough fights. 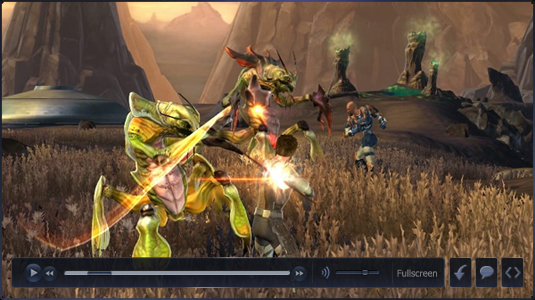 Just as Corso gets the tools necessary to be both an effective tank and damage dealer, your other companions will get the tools needed to make them effective in multiple situations.

Healing/Support focused companions get a suite of medical abilities like Field Dress and Kolto Pack to keep their allies alive and fighting. They also unlock control abilities, such as Carbonized Stream, which requires the companion to focus entirely on keeping the enemy locked down and out of the fight. And, of course, they also get some attacks that can contribute to the fight when healing isn’t necessary.

Ranged damage companions can take one of two stances; a Sniper Mode that emphasizes their gun attacks and makes them deadly one-on-one combatants, or an Assault Mode that enables powerful explosive attacks more suited for in-group combat situations.

Melee damage companions focus on close range attacks; for some companions, this means a Lightsaber, vibroblade, or electrostaff. For others, this means Flamethrowers, Oil Slicks, and other forms of wrist-mounted firepower.

Melee tank companions, like their ranged counterparts, have multiple ways of drawing fire from enemies and are also given powerful close range attacks that allow them to function as both a tank and a damage dealer as necessary.

We believe with these recent updates to companion abilities, we add another dimension to companion characters, really making them come alive in combat as well as conversations. In my next blog, I’ll explain how companion AI works, as well as giving more details on their roles in a group.

Be sure to check out part two of William Wallace's blog here!