Hello there, I’m Georg Zoeller, and I’m Principal Lead Combat Designer on Star Wars™: The Old Republic™. In my previous developer blog, I introduced you to the Advanced Classes Game System in the game. In today’s blog I’m going to explain how the system has evolved over the last few months based on iteration, gameplay testing and focus groups.

Advanced Classes (often abbreviated ACs) are chosen on your faction’s capital world – either Coruscant or Dromund Kaas - when your character reaches level 10 or above. Each base class gets a choice of two Advanced Classes; for example if you are playing a Jedi Knight, you will be able to choose to play the Jedi Guardian or Jedi Sentinel Advanced Class.

As you level up, your character will gain abilities from three sources: 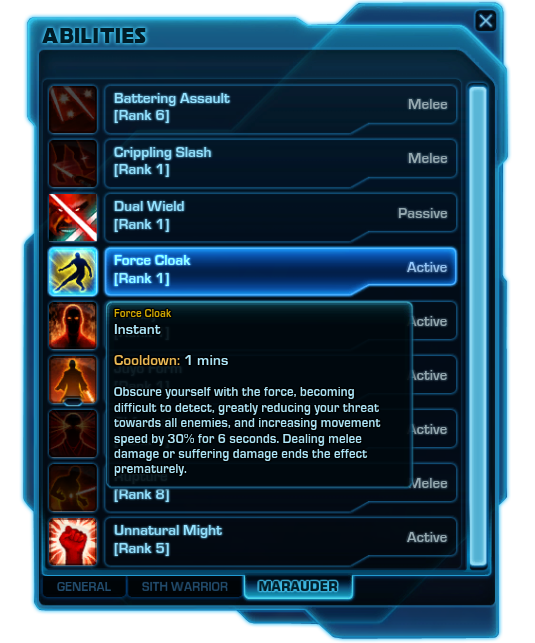 Each skill tree provides access to a number of active abilities (which are added to your ability bar, and can be activated during play). You can also assign your training points to passive abilities. Passive abilities are ‘always on’, and alter how your base class abilities work.

It is important to note that the choices you make in your skill tree never subtract from your base class abilities; they instead improve and add to the character’s arsenal. 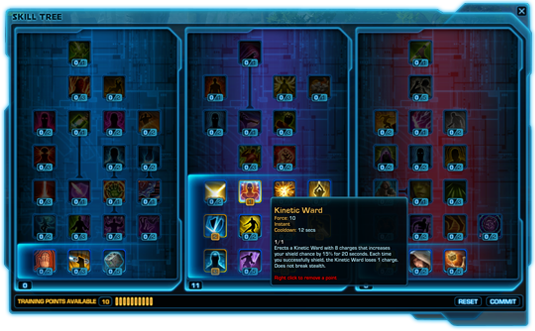 Imagine a Sith Warrior character, with the Juggernaut Advanced Class. As part of the tanking and control themed ‘Immortal’ skill tree, he may choose to learn Force Grip. This upgrades the base class ability Force Choke from being a channeled ability, requiring several seconds to activate, to being an instantly used ability. This increases the Juggernaut’s effectiveness at engaging multiple enemies at once, as those being choked not only take significant damage, but are also unable to act. The Force is indeed strong with this ability!

The Marauder Advanced Class on the other hand, as part of the ‘Annihilation’ skill tree, can opt to learn the Close Quarters ability, removing the minimum range requirement from Force Charge. A Marauder with Close Quarters, instead of just opening combat with Force Charge, can use it multiple times in the course of a fight – reinforcing the Marauder’s role as a highly mobile melee damage dealer who moves quickly between multiple enemies on the battlefield.

As well as these two Advanced Class-specific skill trees, both the Juggernaut and the Marauder have access to the shared ‘Rage’ skill tree. Abilities in this skill tree improve the control, mobility and burst damage capability of characters who invest into it – all traits desirable to both the Marauder and the Juggernaut. A sample ability here would be Force Crush, a powerful and very iconic force power that crushes every bone in an enemy’s body.

Remember, you will always have access to a limited number of training points to spend in your skill tree, so your choices are important. You may choose – for an in-game credits fee – to re-assign your skill points if you wish, so you can experiment to find your perfect combination. Any one of the three skill trees are valid to specialize in, or you can spend training points in all of them for a more well-rounded character.

We thought it might be good to give you a peek at some of the recent changes made to each Advanced Class since they were announced. While we’re constantly iterating and balancing each class based on our own objectives, we also pay attention to feedback from internal testing, the (ever expanding) Game Testing Program, and the community.

The following list of changes is by no means complete or definitive for the final game, but it should give you a good idea of where the class you are planning to play is heading.


How are we making these decisions?

In addition to working through the feedback from our Game Testing Program, from focus groups and from internal testers, we are relying heavily on metrics gathered from every server to understand and contextualize the feedback we are receiving. We thought we’d share a couple of images from our metrics system – as images are worth a thousand words, after all: 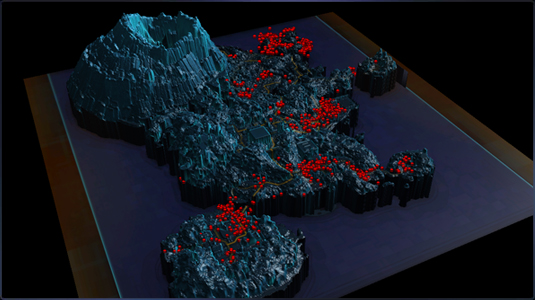 This is a 3D visualization of death locations for one testing group on Ord Mantell. 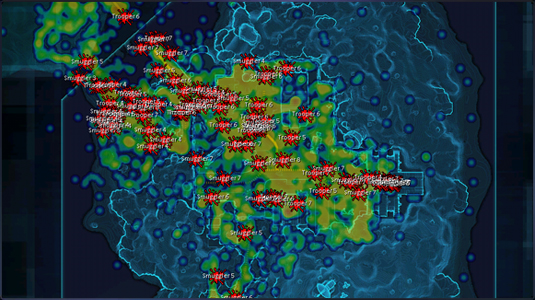 Here is a movement heatmap and death details for a sub area on Ord Mantell, from an earlier test. This exposed, shall we say ‘survivability issues’ for Smugglers on their class quest at early levels. That’s since been corrected!

We also use these heatmaps to understand the flow of movement through an area, optimize maps and other guidance systems and identify potential locations for special content such as datacrons or unique enemies, which are specifically designed to reward explorers that go off the beaten path.

As well as all these metrics and testing feedback, popular topics from the community (such as the desire for a single saber DPS on the Jedi Knight) are surfaced by the community team and discussed as well. Starting a forum topic is never a guarantee we’ll change the game – but we are listening.

Star Wars: The Old Republic is a game in development and in active testing. Any feature, ability or even class name mentioned above (or anywhere else on the website) is subject to review and testing, and may change between now and the game's launch. The BioWare team believes in making fully-polished, quality games. We are listening to your feedback, and will continue to make improvements.

Thank you, and may the Force be with you!