Behind the Scenes Look at SWTOR: Cinematics

Hello SWTOR community! My name is Ashley Ruhl, and I'm the Lead Cinematic Designer on Star Wars: The Old Republic. We're very excited to be celebrating SWTOR's 10th anniversary this year, and I'm here to give a nostalgic retrospective on the world of SWTOR cinematics: a little behind-the-scenes about how we create, where we've been, and where we hope to go in the future. 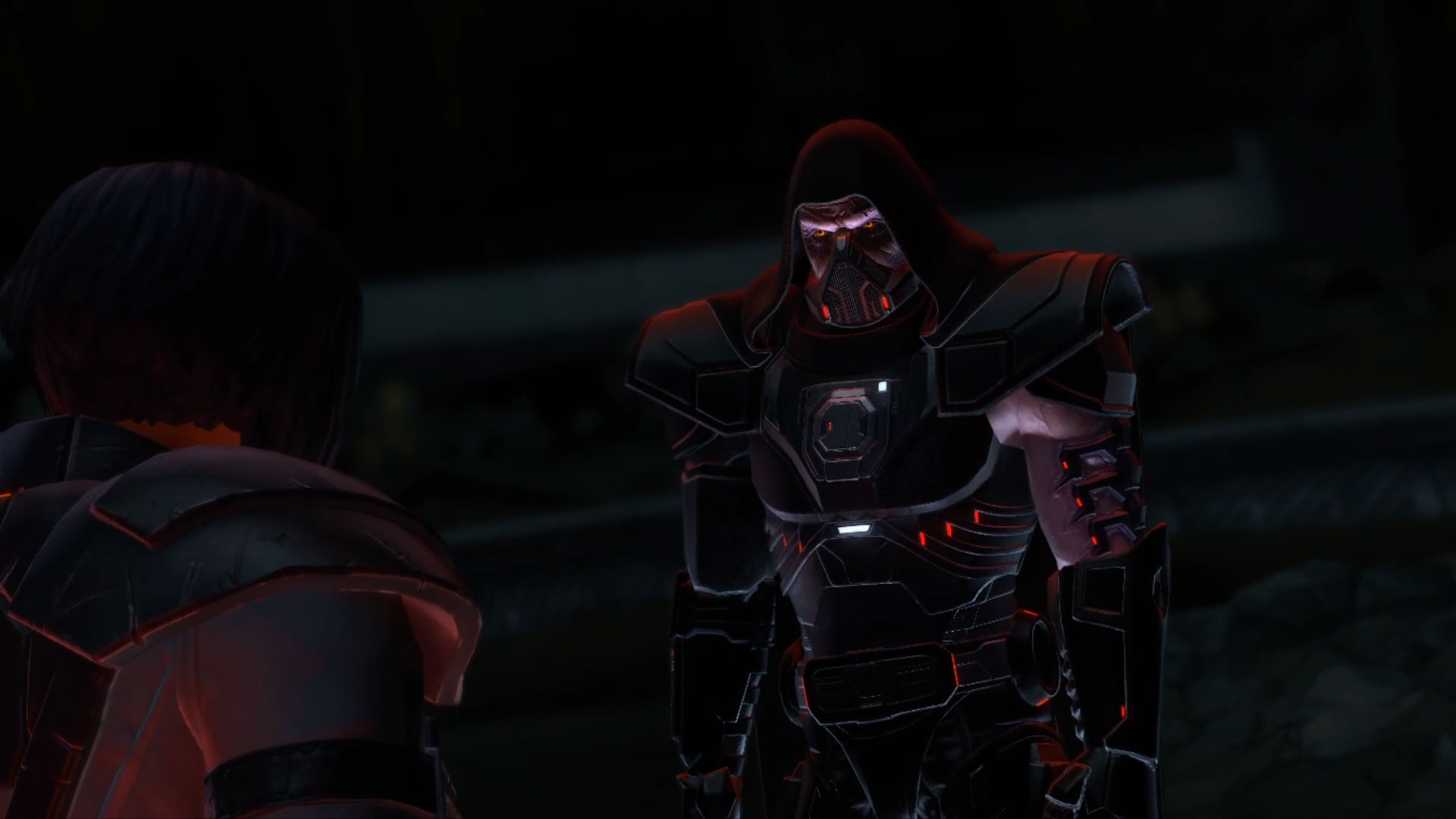 "Cinematic Designer" is a unique role in games, and the responsibilities vary by project. For SWTOR, a Cinematic Designer is like a director, actor, and editor rolled into one. We take recorded scripts from our narrative team and create them visually. We set stages, place actors, decide where the action starts and stops, and create acting performances from a library of animations. We also work closely with art, visual effects, and audio teams to polish the final look of our scenes.

One of the features of SWTOR’s choice-based cutscenes is that they can play differently if you're a Sith or a smuggler, if you romanced this character or exiled that one. Our conversations are constructed like many alternate realities stacked on top of one another, with conditional settings that play the scene in different directions, but always return you to the main story. The volume and variability of our cutscenes means we can’t create custom animations for every scene. So we use timeline tools, camera editors, and extensive libraries of animations, audio, visual effects, and music. When combined with dialogue and characters, this pipeline has given us the ability to create new stories for years. To make scenes custom to your story, we create conditional cameras that accommodate varying character sizes. Our tallest male character is much taller than our shortest female character, so that's a big difference in camera framing! We use a camera system called "redirects" that programmatically uses different cameras based on a character's body type and group size. Every camera is then edited by a cinematic designer to frame your unique character for the greatest dramatic effect.

Few games have hundreds of hours of hand-scripted cutscene content, especially starring fully-voiced customizable player characters. For the launch of the game, the cinematics team delivered 8 class stories, as well as cutscenes for side quests, world quests, companion stories, romances, and a few special cinematic moments. One of my favorite memories from launch was a moment on Quesh, when one of our world designers was scripting a quest about blowing up a crane at a venom refinery. There was no cutscene originally assigned to the quest, so the designer approached me, and asked "Instead of playing this out in gameplay, could we make a short cutscene when the crane blows up?" My eyes went wide as I asked, "Can I make it a 'cool guys don't look at explosions' moment??" The resulting scene might be my most screenshotted scene I've ever created for SWTOR, and I was absolutely delighted that the community enjoyed it as much as I enjoyed making it. 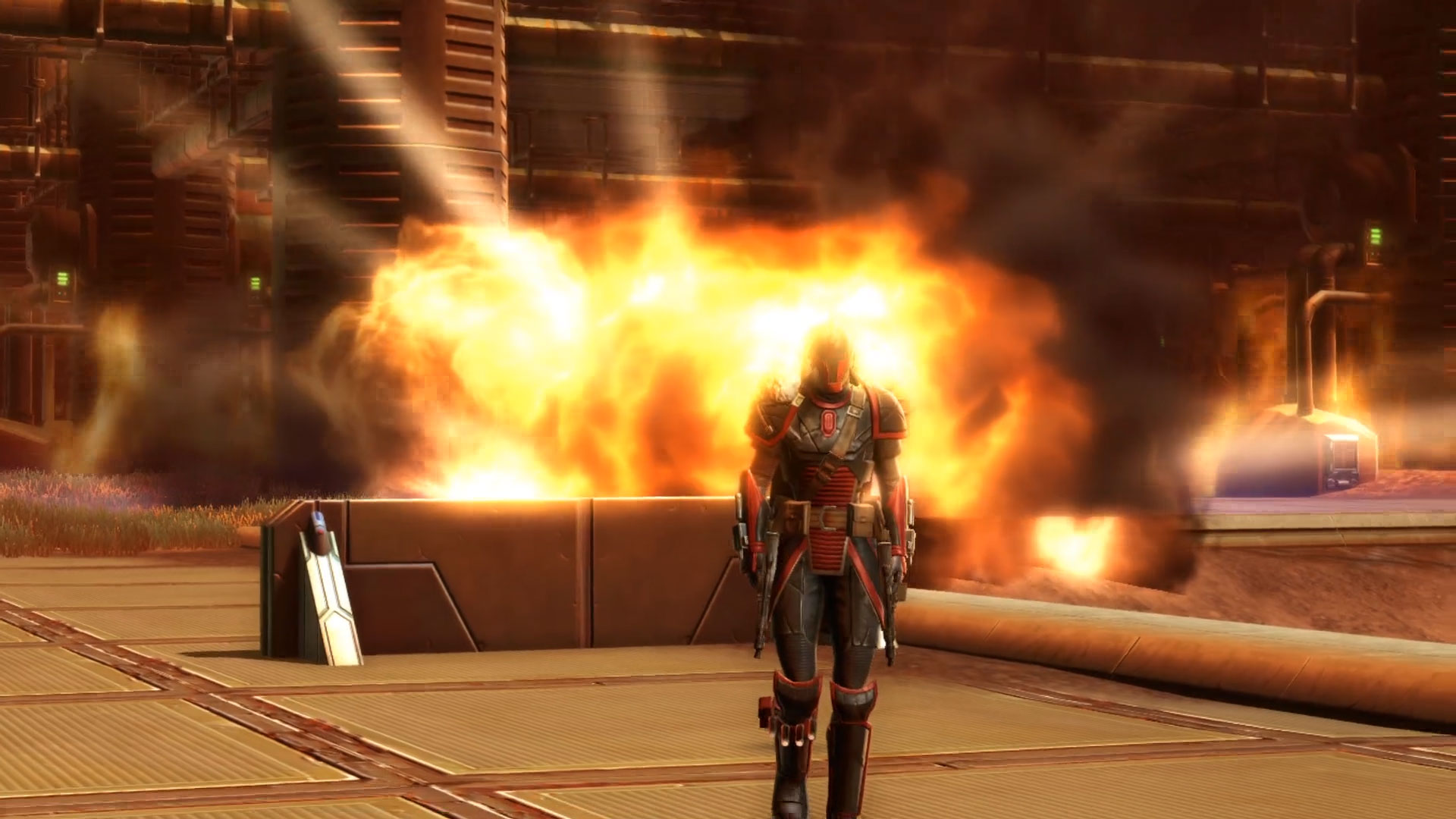 After launch, the cinematics team stretched beyond standard stages and into new styles of cinematic presentation. One of our greatest improvements was moving cameras. Our cameras could now track character movement, swing to reaction shots, follow the path of spaceships... the galaxy was ours. This only made us more bold to bend the rules of our tools, most notably in our space battles. Our cinematic stages are static, meaning they can’t change position during a scene. We couldn't attach characters to a ship and have the ship fly through space, but we could, however, move all of space around the ship. So any time you see a scene from the cockpit of your ship, the galaxy is literally revolving around you as we move the stars around a static stage. It’s a lot like a theme park ride!

I would be remiss if I didn’t mention how much I love crafting romance scenes in SWTOR. Relationship moments are fantastic opportunities for character performance in cutscenes, getting to know your companions beyond the saber slashing and blaster fire. The wide array of romanceable characters also gives us variety in our acting choices. How Jorgan approaches romance is different than Vette, and we bring that into their physical performance. Carefully choosing the perfect animations for an eye glance, a weight shift, a kiss… really makes these scenes a delight to create. Additionally, with so many kinds of player characters, it’s an incredible design opportunity to build romance scenes that can feel differently based on the character you’re playing, and even have different outcomes! One of my favorite romance scenes, reuniting with a particular Sith Warrior companion on Iokath, plays out in extremely different ways depending on your choices. I enjoyed creating visual emotional payoff for all of those branches, knowing that they each led to a very different kind of story.

Now 10 years later, we have a full cinematic playground where we can build, experiment, and create new solutions. It is a delight to read our writers’ scripts, and think “How can I visually make this scene as epic as it is on the page?” And if I may get a little sappy for a moment, I believe there is magic when your own unique character is the star of a movie. Seeing your character, who is a part of yourself, portrayed as the hero can change your life, because those are the moments that you can see those qualities in yourself.

I’m happy that SWTOR is still going strong after ten years, and that we get to share more of this galaxy with all of you. There’s amazing cinematic story in SWTOR that we’ve had the privilege to tell, and have yet to tell, and it’s exciting to think about what thrilling moments we’ll be making next.