The Making of Gear Inspired by “The Mandalorian”

Here we are in the galaxy far, far away, thousands of years before the events surrounding the movies. We, like many of you, were entranced by the stories being told in season one of “The Mandalorian,” and we’re eagerly waiting to see what happens when season two premieres on Friday, October 30th.

We introduced many items inspired by “The Mandalorian” in 6.1.4: everything from armor sets to Stronghold Decorations, but for today’s behind the scenes, we’ll focus on the Mandalorian’s armor, blaster pistol, and blaster rifle.

What “Inspired by” Means to Us

Since Star Wars™: The Old Republic™ is thousands of years before the events of “The Mandalorian,” it’s very important to us that things aren’t just replicas of what you see on the show. It wouldn’t make much sense to see something “modern” in SWTOR and then appear completely unchanged so many generations later.

To address this, our talented artists and designers worked hand-in-hand with our partners at LucasFilm to create an iconic look that clearly evokes the armor and weapons you love while still being true to the Old Republic Era.

A Mandalorian Needs Their Armor

Mandalorians tend to have very distinct armor, and The Mandalorian is no different. To build a proper armor set inspired by “The Mandalorian,” it was important for us to look not only at the show itself, but also famous bounty hunters throughout the galaxy. We wanted to create a unique silhouette, while remaining true to the feel of a Star Wars bounty hunter. Keeping these things in mind, we began conceptualizing what our Mandalorian-inspired armor set could look like.

With a concept in hand, we knew that the next step was to create something special for our players. Looking good in a still image is important, but it needs that extra step to truly bring it to life, once it’s in your hands. To achieve this, we looked for opportunities to implement unique functionality for this armor set. 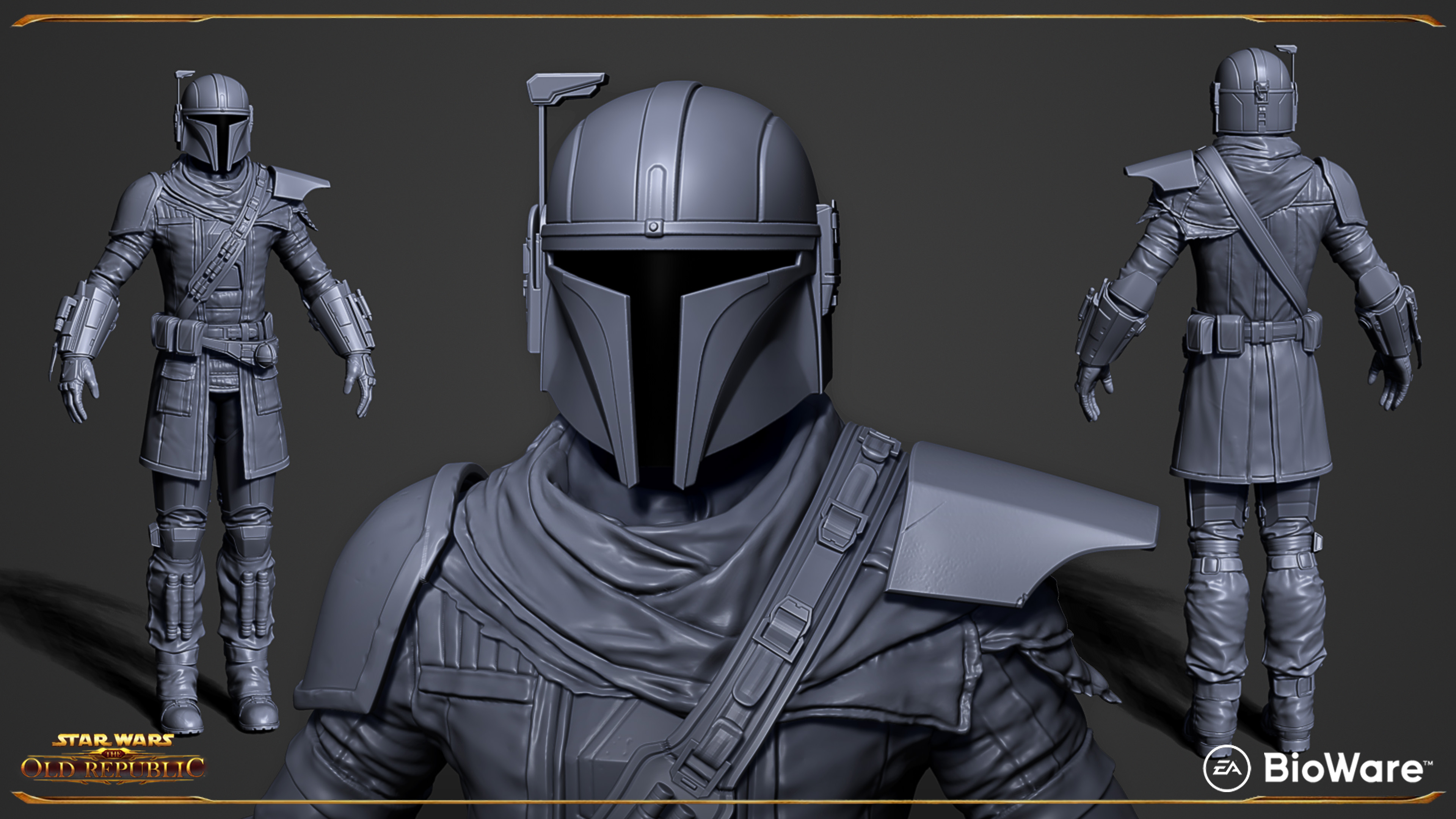 The first of those features is a unique animation for the bracer, something we haven’t done prior to this year! The rangefinder on the helmet also animates with a special visual effect that changes based on your equipped color crystal.

Bringing it all together, we have the finished version of the Infamous Bounty Hunter’s Armor Set.

As we started researching what building a blaster inspired by “The Mandalorian” could look like, we decided to use the prop’s true origins as a jumping off point. On the show, the Mandalorian’s blaster base is built off of a real life pistol, the Bergmann No. 1, also known as the Bergmann 1894. A perfect place to start!

With our base, the next step was to begin doing Star Wars research! We looked at weaponry in everything from the classic films to “The Mandalorian” series for elements we could bring into our blaster.

Eagle-eyed players will notice some very specific greebles being used --the two cylindrical wire pieces on the side were previously seen on the DT-12 Heavy Blaster Pistol; the metal washers and muzzle can be seen on Cara Dune’s blaster pistol on the show; and the large metal disc on the side is from a DL-44 and the Mando’s own blaster pistol!

Finally, although this is inspired by “The Mandalorian,” we needed to ensure it kept players immersed here in The Old Republic. To do this, we broke up the silhouette even more by adding a DL-44 style heat sink on the front and adding an Old Republic-style metal disc to the side. We felt this brought the Payday Blaster Pistol more in line with SWTOR’s style while keeping that Mandalorian feel!

The Rifle Does What Now?

The Amban style of sniper rifle has appeared in many versions throughout Star Wars, and we were super eager to take what we saw in “The Mandalorian” and put our own spin on it for SWTOR! To start that process we took shots from “The Mandalorian,” along with a variety of prop references from the show, to begin sketching our initial designs.

Sometimes you can find inspiration in the most interesting places. When we moved from our sketches to building the weapon in-game, we had to take into consideration how characters uniquely hold rifles in our game. This meant that our rifle needed to have a pistol grip in the rear and an enlarged foregrip in the front, which helped differentiate it from the Mandalorian’s rifle and place it more squarely in The Old Republic.

When building weapons in Star Wars, the details are important. The construction methods, weathering, and age of the rifle’s surfaces were referenced from western-style cowboy lever action rifles from the late 1800s and early 1900s, including a lever action shotgun for the main receiver section since it mimicked some of the curved shapes of the Mandalorian’s rifle. The wood texture in the stock is based on a very real wood, which happens to be one of our artist’s coffee tables.

The last step in building the Amban JP Blaster Rifle was the creation of the visual effects. We wanted the last shot in the attack to pop open the receiver and eject a power cell. This is meant to evoke a cool scene in “The Mandalorian” where he loads a power cell into the receiver of the rifle. Our team also built new tech to trigger a disintegration effect upon defeating an enemy, emulating a similar effect to what was seen on “The Mandalorian!”

The whole team has been so excited to share these new Mandalorian-inspired items with you, and we hope they can help you live your own fantasy in SWTOR as we all prepare for the new season of “The Mandalorian.” The items we discussed today--and more--are available now on the Cartel Market! Sport your favorite gear inspired by “The Mandalorian,” and share it with us on social media (links).