Behind The Scenes Of World Design

With key non-playable-characters (NPCs) like Darth Malgus, Tau Idair, and others leading the charge in the upcoming ‘Onslaught’ Expansion, it’s no surprise that a lot of thought goes into their creation, but what about other less known NPCs? What about that arrogant guy at the cantina, or the vendor down that dark alley? To get some insight into what goes into creating the miscellaneous characters that populate the universe of Star Wars: The Old Republic, we sat down with our Lead World Designer, Dave Shramek. During this behind the scenes look, we’ll dig into creating one of the ruling gangs of the upcoming planet, Mek-Sha.

For starters, would you like to introduce yourself and explain a little bit about what you do on the team?

Sure, I'm Dave Shramek and I'm the Lead World Designer. On SWTOR, that means I'm responsible for all of the narrative portions of the game that aren't cinematics, writing, and world art. I do area layout. I hook up the writing into our Mission editing tool, so that if the Mission is to talk to a person, that person exists in the world to be talked to. If the Mission calls for a fight, I hook up the character to fight, assign abilities, even assign combat music. If the Mission calls for an item to be looted, I make sure the character or object in the game has the item and that item has all the data you'd expect: an icon, text description, a usage ability if it calls for it. If you're clicking on an object, I assemble the various art pieces into an interactive object called a "dynamic placeable" which mostly means it can be clicked on and go into different states, like crates open when you click on them and there's stuff in there when you loot them, but the stuff is gone when you've looted the object.

There are some elements you mentioned that players would expect, such as creation of Missions, placing of NPCs etc. Is there anything unexpected about what a world designer does?

What any one of us does in World Design has changed over the years, but because we're BioWare, the thing that never changes is that storytelling is central to what we do. When we populate an area with ambient NPCs or enemies, they're interacting with that world. As you move deeper into an instance, the enemies spawned in the world go from "chatting with each other" or "using a computer" to "pointing guns down the hallway" because by then, they're expecting you. If the world changes because of something in the story, like explosions going off as you escape or alarm klaxons, that's a thing we do. If notes from a writer says that a character is an "arrogant, underworld businessman" we create an appearance for that NPC that hopefully reveals those aspects of the character. One of my favorite things I did was for the Smuggler Mission chain on Coruscant. The Smuggler is invading a gang HQ to rescue a slicer named Kixi and when they get to the door she's behind, the door is locked. When I created the door panel, I made a custom use ability where the Smuggler pulls out their gun, gives it a twirl, and shoots the panel. Then I named the ability "Unlocking" so that's what it says on the cast bar.

You mentioned creating the appearance of NPCs. Could you elaborate on that? Is that the same as dressing a player character or are there differences?

We have access to some options that players don't when dressing our NPCs. For example, some of our outfits are made with embellishments that we can attach or leave off, depending on how fancy we want the character to be, and in that way we can get more variety out of the character outfits we have. I can make a less dangerous enemy in underworld armor not have the heavy pauldrons or elbow armor. Or I can leave off a helmet's goggles so players can see the eyes in cinematics. Or I can leave off some of the elaborate elements of boots because your average vendor might not have heavy armor greaves, but would wear a sturdy pair of synth-leather boots. The wider color palette we have access to makes it easier to mix and match armor pieces without needing to burden character art with a lot of requests. Especially the newer pieces have slightly different material properties that may saturate a color more, or appear brighter, so I need to use a slightly different shade of red to make the whole set match.

For the upcoming planet Mek-Sha, one of the powerful gangs is a group of ex-Mandalorians who work for a man named Indigo. Indigo had to get his name from somewhere, so I assembled a lot of various heavy armor pieces and tried to get them all the same shade of, well, indigo. But some pieces are a shinier metal, while some have the flat plastic surface you expect from Trooper armor.

The rest of Indigo’s gang doesn’t play a direct role in the storyline, but one of the most fun parts of the Star Wars galaxy is the way every background character implies a fascinating story happening just around the corner – that’s the kind of feeling we want to create with the NPCs populating the Old Republic. That’s what I mean when I talk about using costumes to tell story. We can tell a lot of story just with how they’re dressed. When it comes to Indigo's gang, being ex-Mandalorians, that means I get to mix and match pieces. Being no longer Mandos, they probably have to scrounge to get the armor they want. Indigo, because he's the boss, gets the best bits. And Gizka, who's the "kid" of the group has the most mismatched pieces. She looks the most cobbled together. But it was important for me, when dressing Mandalorians, or even ex-Mandalorians, that they all look similar, recognizably Mando, while also having that kind of individualism I expect.

Hypothetically, would the way these Mandalorians are dressed also correlate to how they'd behave in a combat scenario?

Absolutely. Take Beskad for example. She's named for the famous Mandalorian sword, because she's the deadliest on the team with one. If she were in combat, she'd have melee abilities. Her outfit has a spiked pauldron, so she'd definitely get a good shoulder charge. Her gauntlets have spikes, so we'd try and give her a nice back hand or some punching attacks. And she's got a knife tucked into her boot, so we might give her something like the Agent's shiv attacks. It's all about character, the story tells us some things about the character. The appearance tells us more or allows us to express that character in a specific way. And that tells us what they'll be like in combat. We try to make every part of what we do inform the story. Indigo has a kind of cape on his armor, because he's the leader and he's kind of taking a bit of a cue from Shae's "Mandalore the Avenger" look. But that also makes him look like a heavy-armored Clint Eastwood, so if he were to fight, he'd be more gunslinger than your typical Mandalorian. 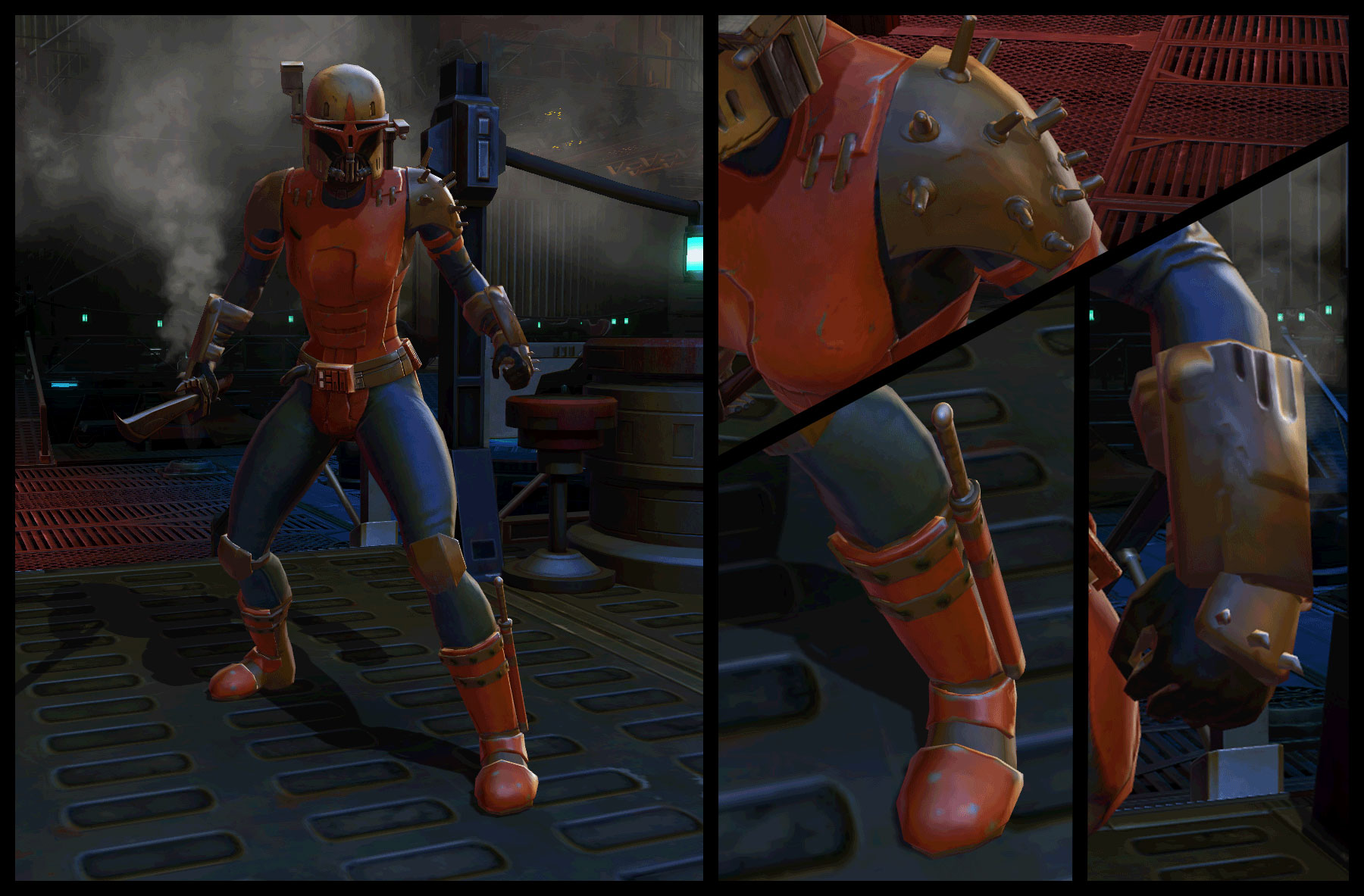 Can you walk us through the color palette decision process for Indigo’s gang? Was there a specific reason/theme the team was going for in choosing those color combinations, equipment, etc.?

When I made the Mandalorians for the Darvannis chapter in Knights of the Fallen Empire, I created twenty-seven unique appearances. I created a medic-specific Mando armor and color scheme, then created 3 groups, each group was sorted by weapon (one large blaster, two smaller blasters, or a rifle) and then each group had 8 different looks, one for each body type. Again, I think Mandalorians would express their individuality, so I just tried to pick two complementary colors that I hadn't used before.

For Indigo's gang, I had to be more specific. Indigo was the only one that needed a specific color palette. After that, I wanted to make everyone kind of vibrant and unique, like on Darvannis, but also steering away from the kind of colors that could be mistaken for Indigo. I figured they'd give him a wide berth on that. One of the characters who goes by Forge, uses the chest piece and helmet for the Charismatic Mandalorian because she's the one who makes sure the gear they cobble together has the personality and flair they're looking for, and keeps it all in working order. Even though we have more color options when making character appearances, we can still only change two of the colors on the outfit, just like players using dye packs. The Charismatic Mandalorian armor has a splash of orange on it that cannot be changed, so that meant that I was definitely giving one character a lot of orange in their armor.

The twins, Talon and Ranger, are both snipers and so I made them hunters. Their armor has a lot of trophies, fangs, fur, claws, but also has a natural look of leathers, or colors that might blend in well with stone and natural environments. Sometimes, I chose a particular kind of leg armor whose texture matched the chest armor I was using, but one of those textures only comes in charcoal gray, so I have to try to match that gray using one of the two color options I have for the other piece. Maybe a set has a baked in accent color, and I'll try to find pieces that let me duplicate that accent color in the other pieces to try to unify the look. So sometimes I make decisions based on what's available. Slice, who is the group's slicer, has techier armor than most Mandalorians and it has these red wires running through the chest piece. So, when I chose legs, I chose ones where I could duplicate that red accent and unify her look.

Last question, what aspect of Indigo's gang are you excited for players to see or experience once they hit Mek-Sha?

Indigo is one of several criminal gangs on Mek-Sha and one that you interact with differently depending on your past. Since they're all ex-Mandalorians, they don't necessarily like it if you bring Shae or Torian to meet them. And they definitely don't like it if you're Mandalorian yourself.

Thank you for your time Dave! As a reminder, Indigo’s gang will serve a minor role on Mek-Sha and this is the level of thought the team put into their design. Just wait until you see what the main content is like! If you’d like to see more news about the ‘Onslaught’ Expansion, be sure to keep an eye on our newsfeed.