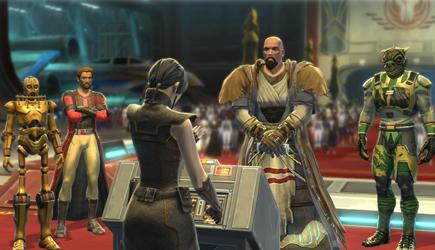 We’re back with a selection of answers to your community questions! Please note that in some cases we’ve combined multiple questions into one, and that we have edited some questions for clarity.

We have now opened an official thread for next week’s Q&A, which will stay open until 2pm CDT on June 11th, 2012 (12pm PDT/3pm EDT/8pm BST/9pm CEST/5am AEST). We welcome your questions in that thread and hope you enjoy the answers below.

Damion Schubert (Principal Lead Systems Designer):  The Group Finder has absolutely been designed to allow 2- or 3-person groups to find the missing players to complete that group. It also has functionality allowing players to easily backfill a group if, for example, you start running a Flashpoint and lose a player.

Damion: This is, in fact, something that we've thought about and might implement at some point. However, it's mostly a nice cleanup thing and is behind other priorities at the moment.

Goldenstar: Daniel Erickson mentioned in the last Q&A that social points will now be awarded for boss kills in HM FPs/OPs. What about PvPers? Are there any plans to add methods of acquiring social points to PvP?

Damion: At this time, players won’t be able to gain social points by participating in PvP. In the future, it’s possible that we’ll evaluate more ways to earn social points and how that system compares to other reward systems in the game.

CiKaidom: You mentioned “pre-made teams” in your answer to Lymain (link), but what did you mean exactly? Are you saying that to increase our ranking we’ll need to always be with the same group of 8, or will we be allowed to change one or more players? Is this ranking common to all team warzones fought or is it specific to a team, and changes whenever one or more members of this team change?

Rob Hinkle (Senior PvP Designer): Our apologies for the lack of clarity. A “pre-made team” in the context of Ranked Warzones simply means any full 8-man operation. You do not need to always queue with the same group of 8, just a full group of 8. Each individual player keeps his own ranking, and when a team is formed and queued we generate the team value based on all of the rankings of the members of that specific team.

Alxandria: Can we get a detailed breakdown of the affect of Presence on our companions? I'm specifically targeting info that would explain if the bonuses are weighted or static.

Jason Attard (Senior Game Designer): Your companion gets a fixed amount of damage, healing, and health per point of Presence on your character, and that amount does not change as you level up. This is the exact same sort of scaling done for Endurance and Power. In fact, putting 100 points of Presence on your main character is equivalent to putting 50 points of Endurance and ~85 points of Power on your companion, so if you’re playing solo or 2-player content where you have your companion out it’s mathematically the most effective thing you can do. This is offset by the fact that it’s split between offense and defense (making your companion less role-specialized) and that you’re sacrificing your personal effectiveness to increase the effectiveness of an AI.

As for how it scales as you level up, characters get lots of Endurance and Power on their gear, but typically don’t get much Presence. This means that, early on, Presence tends to be a bigger proportion of your overall stat budget (and thus plays a bigger role in your companion’s effectiveness) than it does in the late game. In theory, you could make Presence more important by seeking it out for your gear, but in practice we found most players prefer to increase the power of their own character instead, so we made Presence have more of a niche role, and balanced the PvE game assuming players do not itemize towards it at all.

Shintorg: Can you explain the reasoning behind making the BIS consumables, Exotech Stims and Adrendals, drop so rarely and seemingly only on Hard Mod EV&KP? Why isn't there a way to purchase these? Why don’t they drop in Explosive Conflict? Or off bosses?

David Hunt (Systems Designer): These schematics are split between the Black Hole and Daily Commendation vendors in Game Update 1.3. This isn’t in the version of Game Update 1.3 that’s currently on the public test server, but it will make it into Game Update 1.3 before it reaches live servers.

RCcarroll: I play characters of a multitude of levels regularly and haven't gotten one Legacy Item drop. Would you mind saying how often these are supposed to drop and on what kind of enemies?

David Hunt: Legacy items do not have a specific drop location. Inheritance can drop from any random loot of level 34 or higher. That usually means killing NPCs at level 34 or above, but it’s possible for an NPC to drop loot slightly above its level. Birthright items drop from level 46+ (Inheritance can still drop from 46-50). It is difficult to state their precise drop rates because most random drop rates vary significantly depending on what you’re killing. Normal bosses throughout the world have a substantially higher chance of dropping these than regular NPCs.

These drops are included in the Artifact quality loot table. As with everything on that table, the best way to find it is through Artifact quality lockboxes anywhere in the level range. Tough bosses that drop random loot are another option. However, I would not recommend purchasing these boxes with the expectation of finding lots of Legacy gear – there are tons of competing items in those loot tables.

Whenever dealing with any drop rate that’s low and random from a large selection, the individual experience ends up varying wildly. The overall drop chance for these is increasing in an upcoming update, and we’re looking at other ways to normalize the acquisition rate of these items.

SNOperaghost: Which crafting skills will be able to make which specific types of augment kits?

David White (Systems Designer): Armormech, Synthweaving, & Armstech can all craft Augment Kits. The kits are the same regardless of Crew Skill.

StagehandMERC: Can you talk about efficiency bonuses for Crew Skills? Are they a percent reduction to the time it takes to complete tasks, or is there more to it than that? Also, is there an efficiency bonus granted by companion affection? How does it scale from 0 affection through to full?