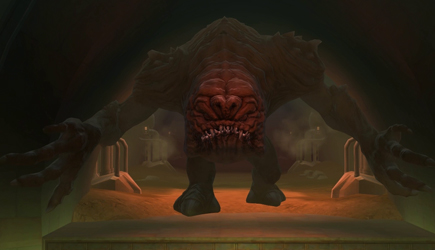 Going forward, we'll be reducing the number of questions answered in each Q&A, but we'll continue to post threads, gather your questions, and provide answers each week!

We have now opened an official thread for next week’s Q&A, which will stay open until 2pm CDT on June 18th, 2012 (12pm PDT/3pm EDT/8pm BST/9pm CEST/5am AEST). We welcome your questions in that thread and hope you enjoy the answers below.

GarrickBlackSun: I understand he is a long way off, but could you please possibly give us any sort of clearer or better insight to the unlocking of HK-51?

Daniel Erickson (Lead Game Designer): The only thing we’re saying today is its going to take a serious amount of work, involves a galaxy-wide mission, introduces some different ways of playing the game and most people will need to have a 50 of one faction and at least a mid-level character from the other faction. Get working on those Legacy characters!

Zoheb: It looks like the LFG Tool will limit the FP's we can queue for to those within our level range. This may handicap those who have skipped a large number of FP's and have effectively outlevelled that FP's range. Will they be able to queue for FP's below their level range and if not, why not?

Antonia Phillips (Development Director): Not at this time. The reason we did not include this option with the launch of the feature is essentially balance. We did not want to penalize some players by matching them with players far above their level. In addition, we want players to feel that they are contributing to content and not being carried through by higher level players. Don’t get me wrong, I’m not saying we won’t implement a version of this option with a future release. We’ve heard the feedback on the forums and we recognize that this is important, just as long as we implement it correctly.

SAtaarcoeny: Is there any chance of you guys making the PvP win/loss stats viewable by everyone?

Rob Hinkle (Senior PvP Designer): We currently do display a player’s rating via inspection and the /who list, as long as that rating is above a particular threshold (currently set to 1200). We really would like to encourage the competitive aspect of Ranked Warzones by allowing players to compare themselves against each other, so this suggestion is definitely something we will talk about.

Cycao: Can I please get a response on this issue I have for Ranked Warzones and how you will deal with a disconnect? People disconnect from Warzones; it happens and sometimes it’s the game, others it’s a client issue, but it happens. To go down one man in a ranked warzone will be detrimental to the team.

Rob: We are aware that a Warzone team suddenly losing a player is a great disadvantage to that team, and we are investigating ways we can better mitigate that loss to the team.  One of the things that we currently have implemented is that the team that loses a team member will have that factor taken into consideration when the system makes adjustments to ELO ratings at the end of the match.

Skondy: Can one of the Developers give a detailed breakdown on how threat is generated? I have heard that it is generated more by how many times a player can land blows on the boss than by how much damage is dealt. So that a tank can hold aggro better by using his basic attack (rapid shots, saber strike, etc) in combination with his high threat moves, rather than trying to do as much damage as possible to a boss.

Austin Peckenpaugh (Senior Designer): Threat is equal to damage inflicted at a "one damage equals one threat" ratio. Passive threat modifiers then adjust that amount by a percentage, while active threat dumps adjust current threat levels by a percentage. I wouldn't suggest using your basic attack to try and generate high threat.

Elfindreams: What does the "cover fire" keybind do? The keybind, not passive skill and not "take cover" or "take cover in place" - specifically "cover fire". It does not have any function in advanced class cover mechanics that anyone has been able to detect.

Austin: This is actually a Dev function that was never cut from the retail build. You are correct that it serves no function to players. I'll investigate why this option yet remains.

Theworldends: With the implementation of "smart" aoe attacks for tanks, why are there still no smart aoe heals that only target the lowest health group members?

Austin: So far, this hasn't fallen into the category of gameplay we want to change. All AOEs prioritize targets closer to the center of that AOE, so a better aimed Revivification or Kolto Bomb will yield better results. It's not hard to imagine a world with "smart" AOE heals though, so I'll end with saying that it's certainly something we're still considering.

Austin: Game Update 1.3 introduces a new system to regulate the stacking of buffs and debuffs, such that only the highest of any same-effect applies. There are some exceptions to this, but by and large (and in the case of armor reduction), only the highest of any same-effect will apply. You will still benefit from the presence of your own debuff (for example, your 5 stacks of Armor Reduction will enable your Guardian Slash to strike nearby enemies), but only the biggest debuff will affect the target's stats. And yes, armor debuffs do benefit all attackers.

Jtsd: Will you release Power/Crit and Defence/Absorption enhancements? Currently the only way to get Crit Rating is to directly swap out Power, which is only slightly behind our Primary Stat in value. The only way to get Absorption is to take a larger amount of Accuracy or Shield Rating.

Jason Attard (Senior Game Designer): We currently have our late-game stats split into two groups: Power, Defense, Crit, and Absorb in one, and Accuracy, Alacrity, Surge, and Shield in the other. Modifications have a stat from the first group, and Enhancements have one stat from each group. This was done to prevent players from stacking a single stat to the exclusion of all others, and to help keep the number of Modifications and Enhancements in the game to a reasonable number. Every time we introduce a new set of gear we refine our item design, and we have considered loosening up the restraints on those stats in various ways, but we do not have an ETA for it yet.

Kingofthebritons: In last weeks’ announcement, we learned that the level cap will be increased later this year. With this change in mind, will any changes be made to the current PvE endgame? For example, will the difficulties for Hard Mode Flashpoints and Operations be increased to match the new level? If not, could you explain why?

Daniel: We’re keeping a tight wrap on details about the level increase later this year until we’ve done far more testing. Right now we have plans and theories but no empirical numbers for what, if any adjustments will need to be made to PvE endgame content.