“What kind of Jedi do you think I am?”

Welcome back to our second Companions 101 blog! I’m Courtney Woods and I will be your guide as we learn more about the companions of The Old Republic™. In case you missed last week’s blog, this new series is meant to supplement our Companions Holonet page and will provide insights, background, information, and tips for the featured companion as well as a wallpaper and screenshots of their customizations. We will be rotating between Imperial and Republic companions. This week we are going to focus on the headstrong Kira Carsen. You can post suggestions for companions to be featured in future blogs in this official forum thread. Now let’s get started!

The best kind of padawan should challenge their master… or at least, that is what Kira Carsen believes. Kira is not your typical Jedi, raised on Korriban in the Sith Academy, she has witnessed the brutality of the Empire first hand. After escaping from Imperial Space, Kira had to look out for herself until Master Bela Kiwiiks found her and brought her to into the Jedi Order. It isn’t surprising that Kira and Kiwiiks share a special bond, but Kira was afraid to share her past until she could prove herself as a Jedi.

The Knight first meets Kira Carsen on Tython, the ancient home world of the Jedi. At the time, Kira is still “the extremely vocal” padawan of Master Bela Kiwiiks. It isn’t until the events on Coruscant that Kira joins the Knight. 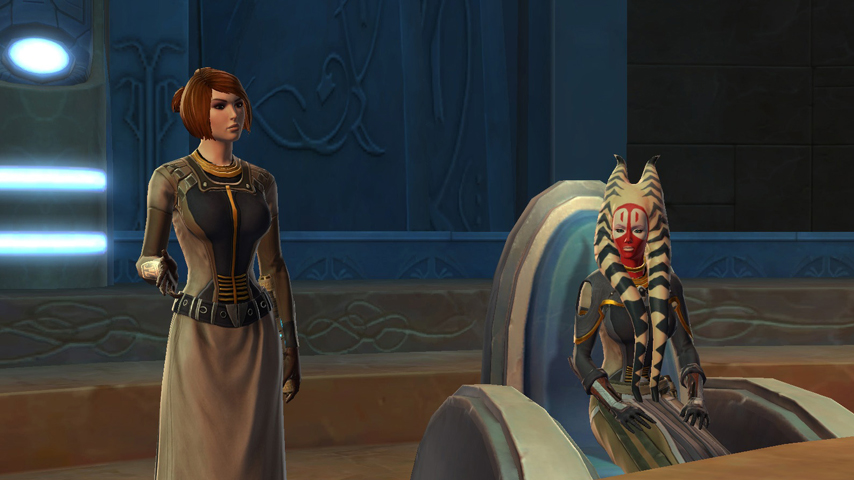 “Well, that brightened up the room…”

Kiwiiks gave Kira a lot of free reign and they had a history. So how does Carsen feel about becoming the Jedi Knight’s Padawan? Hall Hood, Lead Writer on Star Wars™: The Old Republic™, gives us some insight into Kira’s mind as she makes this transition:

“At first, Kira doesn’t see herself as the Knight’s Padawan. She thinks she’s being loaned out to the Knight’s mission for a short time while her real master, Bela Kiwiiks, handles other business. When it becomes clear that Kira and the Knight will be together for much longer than she originally anticipated, Kira accepts having a new master with her usual disregard for authority. It isn’t that Kira thinks she’s better than the Knight; she just refuses to respect anyone until they earn it. Once she realizes the Knight is one of the greatest Jedi of her generation, she recognizes how lucky she is to have such a teacher. She never quite loses the snarky attitude, though.”

To simply classify Kira Carsen as “another Jedi” would be a mistake. Perhaps because of her past, Kira will surprise you with some her reactions to your decisions. Kira disregards authority on multiple occasions. She respects the Jedi Order, but when you are choosing your conversation options remember that she doesn’t mind breaking the rules from time to time. If you want to gain Kira’s admiration, you need to think about and understand her motivations in why she joined the Jedi Order. So what are Kira’s motivations to become a Jedi master? I brought this question to Hall and he reminded me of Kira’s age and past:

“Kira is so surprised just to be accepted as a Jedi that the concept of becoming a Master hasn’t even entered her mind. She’s still young and has a lot of learning to do, but she definitely sees herself as a reformer within the Jedi Order. Kira thinks the stuffy Jedi Masters need to be taken down a peg or two and lighten up on their attitude—and she’s just the right person for the job. If Kira becomes a Jedi Master, she won’t stop until she’s made Grandmaster of the Jedi Council and can finally abolish all of her least-favorite rules and restrictions.”

In her own way, Kira is a bit of revolutionist among the Jedi Order. When bringing her on missions, you might want to keep in mind that because to her it’s okay to break pesky outdated rules. Also remember this doesn’t mean she will be happy if you slaughter an entire village. 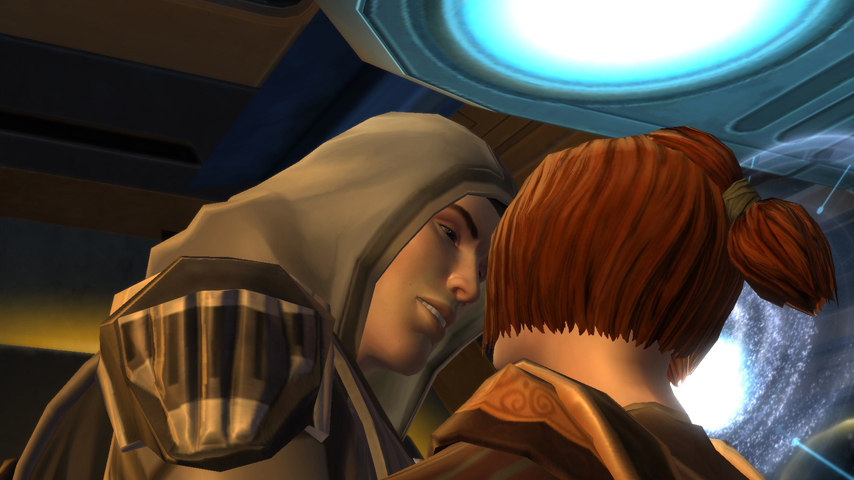 “So much for upholding the Jedi Code. Guess we’re outlaws.”

It’s no secret that the Jedi Order does not condone marriage. The Jedi Code decrees that, “There is no emotion, there is peace.” If a Jedi Knight becomes emotionally attached to another that peace could be disturbed and lead to the dark side. Since the Knight and Kira are both members of the Jedi Order any romantic relationship would cause trouble. I asked Hall Hood if he had any advice for players who wish to have a long term relationship with Kira:

“More than many of her Jedi peers, Kira is not afraid to experience an emotional connection with others. She understands that attachments can lead Jedi down the path to the dark side, but that doesn’t mean she’s going to deny herself a chance for love just because the Order is afraid of what she might become. Kira has been tempted by evil and knows she can resist it—but she won’t force the Knight into compromising Jedi ideals just to kiss her. The Knight will have to take the initiative and show a willingness to break a few rules, too.”

If you decide to pursue a relationship with Kira, you will be breaking the rules of the Jedi Order. However, in doing so, you could help her in shaping a new, more open order. Don’t fret if you make some mistakes along the way – technology and underworld goods are a quick way to get back into Kira’s good graces.

Life on the Defender

Throughout their travels, Kira and the Knight encounter all sorts of characters – some of which decide to join their cause and become part of the Knight’s crew. When Kira isn’t busy helping the Knight save the galaxy, how does she spend her time aboard the ship? I asked Hall Hood, who he thought was Kira’s favorite crew mate (besides the Knight, of course!):

“Aside from the Knight, T7-O1 is Kira’s best friend aboard the Jedi starship. Sergeant Rusk isn’t much good at conversation, Doc’s overbearing smugness is deeply irritating to Kira, and Lord Scourge is an unpleasant reminder of a past she’d rather forget. Luckily, trusty T7 is a longtime friend of the Jedi and always knows the right things to beep and whistle to make Kira laugh. When she isn’t meditating on the Force or practicing her lightsaber stances, Kira and T7-O1 play holochess in the Defender’s recreation area while they trade jokes about C2-N2.”

The Many Faces of Kira Carsen

Companions have always been an important aspect to BioWare games and it is no different with The Old Republic. However, since Star Wars: The Old Republic is an MMO, the developers felt like a feature had to be added so that the player felt like there was uniqueness to their companions. This is where companion customizations come into play. These customizations are purely aesthetic, leaving your choices in game to influence your companion’s personality, but is a great feature to further shape your own Star Wars™ saga.

Kira has eight standard customizations as well as a special Rakghoul customization from our Rakghoul Pandemic event. Check out the screenshots below!

Show your love for this vivacious padawan with some of these Kira Carsen wallpapers! 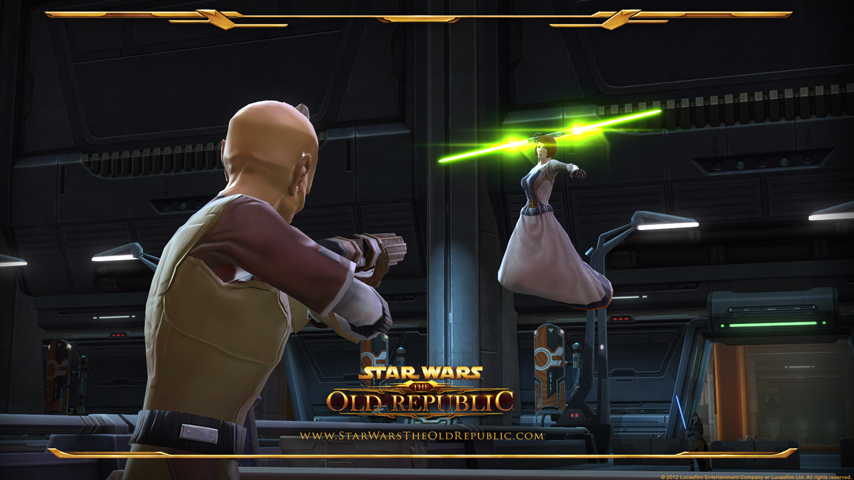 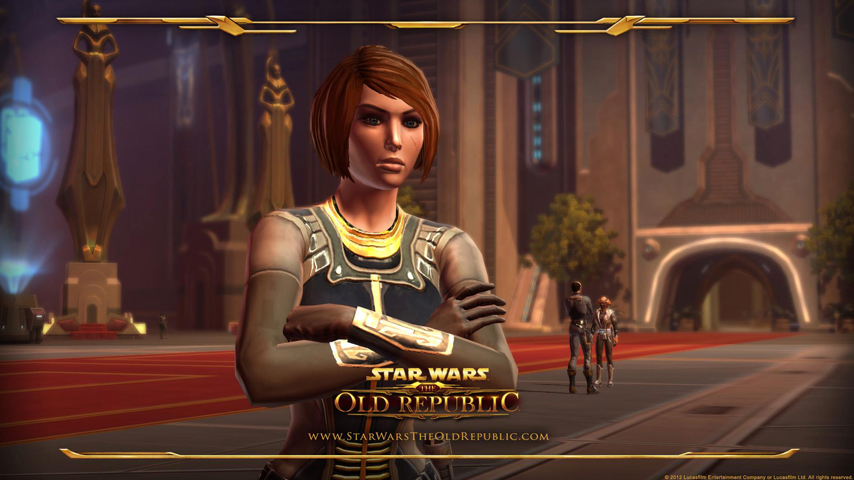 Is Kira your favorite companion? Share some of your most memorable moments with her in this thread.

To learn more about Kira including statistics, background, and her gift preferences, check out the Companions page on the Holonet!