“Me and my buddy, the Sith. Nobody’s going to pick on me at school!” 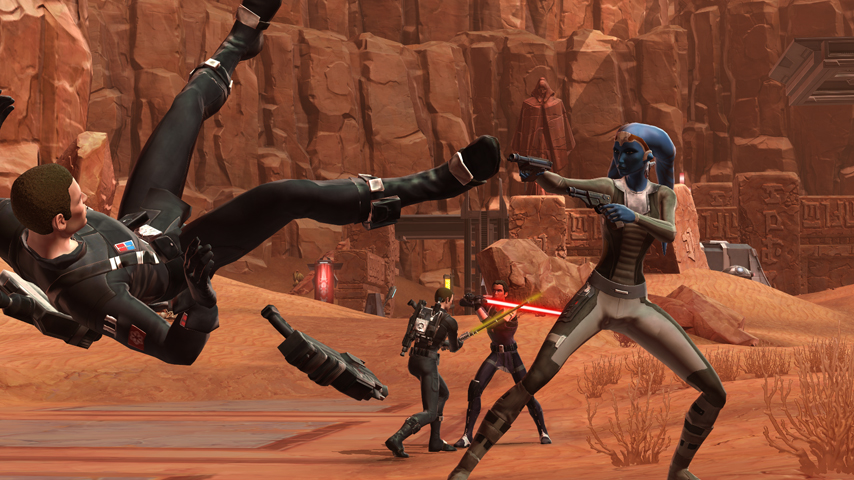 It’s time for our next installment in our Companions 101 blog series. In case you missed our previous two blogs, I am Courtney Woods, Community Production Specialist, and I will be your guide as we learn more about the companions of The Old Republic™! This series is meant to supplement our Companions Holonet Page and provide insights, background information, and tips for the featured Companion. We will be rotating between Imperial and Republic companions. This week, we return to the Empire to focus on our favorite Twi’lek treasure hunter, Vette, as requested by your comments in our previous Companions 101 thread! You can post suggestions for Companions to be featured in future blogs in this official forum thread.

Vette is an energetic Twi’lek from the planet Ryloth. After escaping slavery, she has spent most of her life looking for Twi’lek artifacts in ruins across the galaxy. In the past few years, she has gotten herself into increasingly tight spots, stealing artifacts from powerful collectors and smuggling herself onto Imperial planets, including Korriban, where she first crosses paths with the Sith Warrior. Vette has been imprisoned for raiding the tomb of a Sith Lord and has now been entrusted to the Warrior to find a relic, which the Warrior needs to complete the final trial to become Darth Baras’ apprentice. 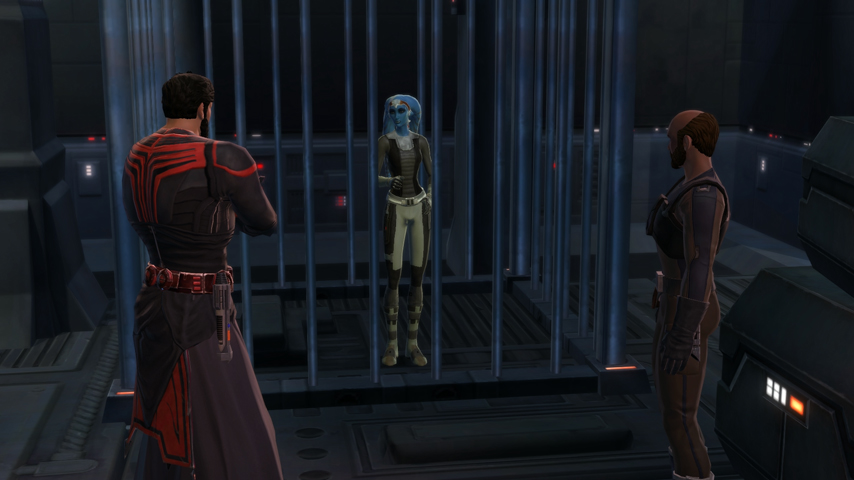 Vette is skeptical and cautious around the Warrior since she hasn’t had the best relationship with Sith in the past. She is very much aware that she has been given to the Warrior as a slave and if she happens to forget, the shock collar around her neck is a quick reminder. Writer Sean McKeever gives some insight into how Vette feels when she first joins the Warrior’s crew:

“Vette isn't exactly a stranger to indentured servitude--she was sold into slavery at a young age, moving from one slave owner to the next until she was freed by the crime lord Nok Drayen--so it's with a certain resigned acceptance that she enters into the Warrior's service. However, this is Vette we're talking about; she's fiercely independent despite her station and isn't afraid to speak her mind. The more she's able to let the Warrior know who she is, the less uneasy she starts to feel.”

Vette is all about the extremes. When she likes something, she expresses it immediately. If she is angry at someone, she will flare and snap at them. She will always let the Warrior know how she feels about a decision or the situation, which can be a delight or a pain. If you want to gain Vette’s trust and respect, keep in mind that her three biggest dislikes are needless cruelty, suppressing the weak, and anti-alien sentiment. Since the Empire is known for committing all three of these, it is no surprise that she has little love for the Sith and Imperials. So what are her motivations to help a Sith Lord? I asked Sean why he thinks Vette sticks around:

“Can you say "shock collar?" But even though they start out as master and servant, hopping from planet to planet with the Warrior reminds Vette of her days as an artifact hunter. That was the only time she was ever really free, exploring the galaxy and getting into trouble with a gang of fellow Twi'leks who would become her closest friends.

Of course, all this adventuring together can easily spark a deep kinship between the Warrior and Vette. As the Warrior becomes more of a factor in her life, she won't be able to help but want the Warrior to succeed.”

When she allows herself to open up, Vette cares deeply about those around her and the warrior is no exception. Even when she was a treasure hunter, all of the money she acquired from the artifacts was used to search for her family. 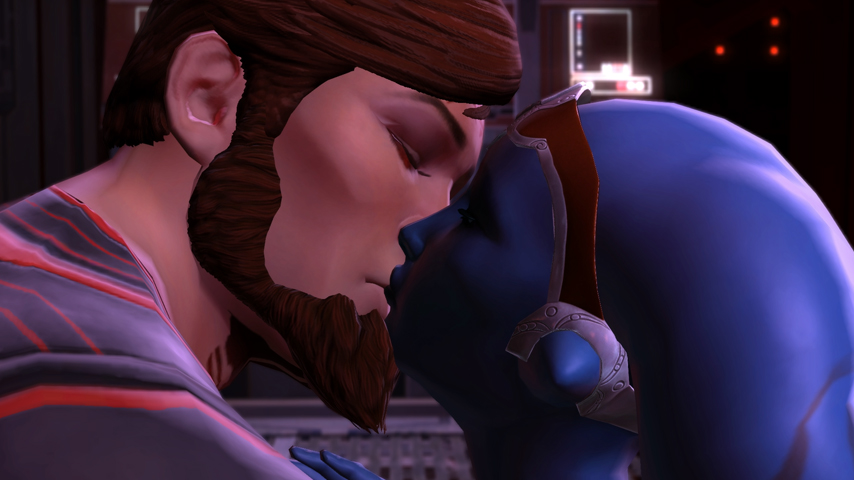 “Still I love you. That has to count for something.”

While Sith do not have the same restrictions as Jedi when it comes to marriage, emotional attachments are dangerous in a different way. Becoming too close to someone can be seen as a weakness that their rivals would not hesitate to exploit. This is definitely something to think about for those who wish to embark on a romantic relationship with Vette. Other Sith would see her as an easy target. So how can the Warrior make their relationship with Vette work without it becoming a weakness? Sean reminded me of her past and that she isn’t exactly helpless.

“While Vette's outlook is at odds with your average Sith Warrior's, she hasn't exactly led a virtuous life herself. Think about all the thieving she's indulged in with Drayen and with her Twi'lek friends, or consider the harsh realities of her upbringing. She has undoubtedly crossed many moral lines over time, so even if the Warrior doesn't care to sympathize with Vette and chooses to keep her at arm's length, there will be situations where their interests meet. The real key is to take full advantage of those parallels whenever possible.”

There is always a risk in creating a bond with anyone as a Sith, but passion can also make you powerful and stronger in the Dark Side of the Force. If you do decide to pursue a relationship with Vette, keep in mind that she is a treasure hunter. A quick way to her heart is to shower her with cultural artifacts, underworld goods, and luxury items.

Life on the Fury

Vette is the first person to join the Warrior’s crew but not the last. Besides Broonmark, she is the only non-Imperial, which is sure to cause some difficulty for the Twi’lek. So how does she feel about the rest of the crew? Does she count any of them as friends? I asked Sean who he thought was her favorite crew mate:

“Well, it's definitely not Quinn. She thinks he's uptight, controlling--the perfect Imperial officer, in other words. When Jaesa's light side, she’s too naive; when Jaesa's dark side, Vette sees her as little more than a bloodthirsty crazy person. 2V-R8 is plenty helpful on the ship, but not someone she can see herself palling around with all that much. And while Vette would much rather have Broonmark as friend than foe, the imposing Talz doesn't exactly leave her feeling warm and fuzzy.

That leaves Lt. Pierce. He shirks authority when it suits him, doesn't feel the need to be a kiss-up and is also not a fan of Quinn! How could Vette not like the man?”

The Many Faces of Vette

Companions have always been an important aspect to BioWare games and it is no different with The Old Republic. However, since Star Wars : The Old Republic is an MMO, the developers felt like a feature had to be added so that the player felt like there was uniqueness to their companions. This is where Companion Customizations come into play. These customizations are purely aesthetic, leaving your choices in game to influence your Companion’s personality, but it is a great feature to further shape your own Star Wars™ saga.

Vette has eight standard customizations to choose from. Take a look at the screenshots below!

Show your love for this headstrong Twi’lek with some of these Vette wallpapers! 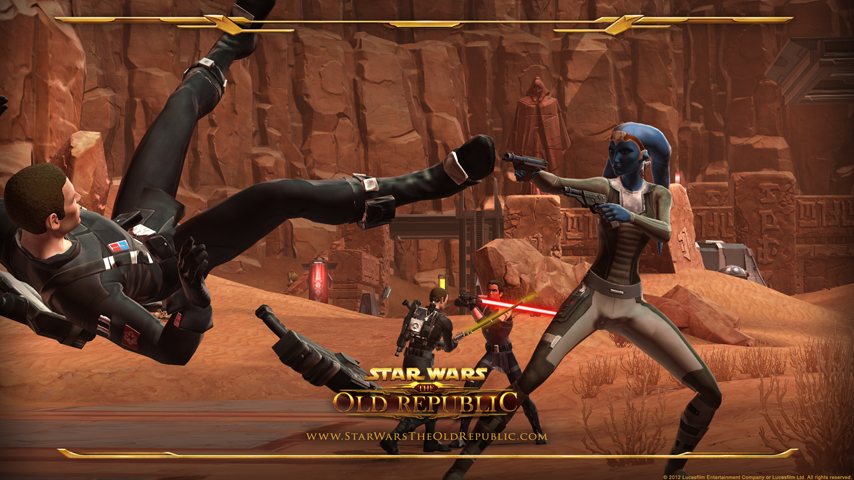 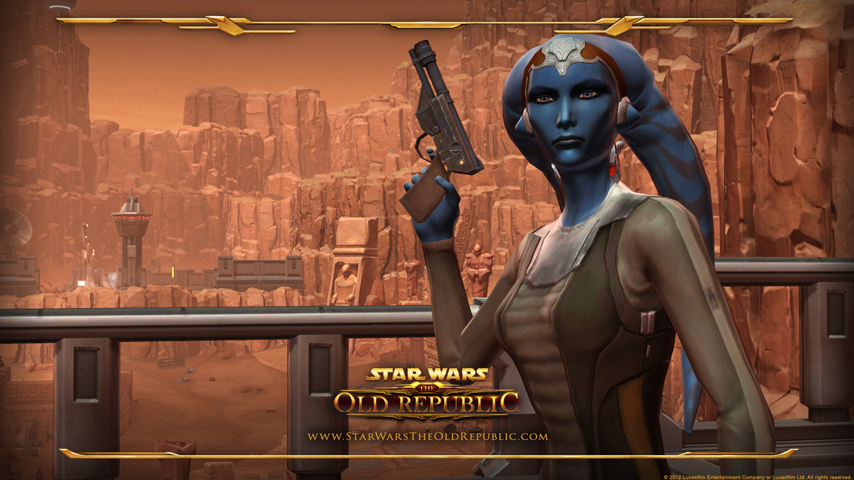 Is Vette your favorite Companion? Share some of your best moments with her in this thread.

To learn more about Vette including statistics, background, and her gift preferences, check out the Companions page on the Holonet!

You can also suggest your favorite Companions to be featured in our next Companions 101 by letting us know in this thread. We will be rotating between Republic and Imperial Companions, so be sure to show your support! We’ll be choosing the next Companion based on the amount of interest shown in the previously mentioned thread!