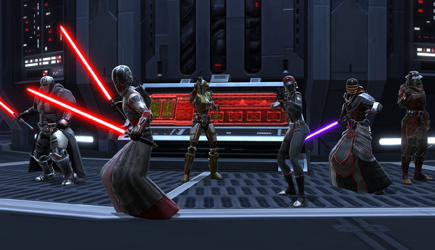 Welcome to our first Guild Spotlight!

As we explained in our introduction, in each Guild Spotlight we will feature one guild from The Old Republic™ and invite them to tell their story. In this spotlight we sit down with Luniara, the Guild Leader of Jen’jidai. Jen’jidai has been following The Old Republic since before launch and they have quite the story to tell…

Tell us a little bit about the beginnings of your guild. When and how was it founded? What is the origin of your guilds name?
Jen'jidai was founded roughly 2 years before Star Wars: The Old Republic went public. The origin of Jen'jidai came from the idea of being Sith. We looked into the Sith language, finding Jen'jidai to mean 'Dark Jedi'. We began to delve into Sith lore and created a guild based on the concept of it being led by fallen Jedi.


What brought your guild to Star Wars™: The Old Republic™?
Star Wars:The Old Republic presents an opportunity unlike any other MMO ever created. First off, it is set in one of the most classic stories of our modern era, the Star Wars universe. Second, it is made by a company, BioWare, that prides itself on character immersion and story driven development. This is very exciting for Jen'jidai because these are the same ideals our entire community is based on. The possibilities are endless.


How would you describe your guilds play style? (ex: Progression PvE, PvP, RP, etc)
Jen'jidai offers even doses of PvP, RP and PvE and welcomes all classes. Something we have become quite proud of is our progression PvE - which caters to both casual and hardcore raiders with two operation groups.


What has been your guilds greatest moment or proudest achievement?
I believe one of our proudest accomplishments that the guild has done would be our new recruitment video. We managed to get together nearly half of our most active members and officers on various occasions. They went through hours of taking and retaking footage, standing there or doing voice overs. All of our members were so very patient and I could not be more proud of them for the time they gave to the guild. The video was made by AuronFett, who put in close to 40 hours on the project (including recording the footage). He donated his time and resources and came through for us with this video.

Here is a link to the video for your viewing pleasure: http://www.youtube.com/watch?v=reilLJnpKxQ

As for one of our greatest moments it would be a result of the organization, skill and dedication of our community. We were ranked as one of the top guilds in the U.S and World for Operation Progression (based on fansite rankings). We have the vast majority of server firsts or Empire firsts raid completions on Jung Ma. For months, we prepared before the game launched and it is great to see when teamwork and dedication provide amazing results!


What would you say sets your guild apart from other guilds in The Old Republic™?
We're diverse. Whether it's PvE, RP or PvP you crave, casual or hardcore, we cater to everyone! In Addition, Jen'jidai is not only a single guild, we are part of Legend Gaming, a multi-gaming community comprised of several guilds. So we have the advantage of providing our members with an environment that favors pretty much any play style. As a result, we have members in our community that have been with us for up to five years, because even if games come and go, the community feel we provide keeps our players with us and that is something we value a lot.


Describe what an average day would be like for a member of your guild.
This is a hard question for us to reply given the varied nature of our community. For the most part, we leave it up to players to decide how to best manage their time in-game. Plus, with casual and hardcore players alike, routines vary a lot. What we can say is that during prime (from 6 to 12 PM EST) we organize events of all natures almost every day. We have Raids going on, PvP nights where members do regular and ranked warzones as well as RP gatherings and missions that sometimes develop in our forums and continue in game. We also have collaborations with other guilds to engage in RP-PvP events once in a while which can be very fun. We do our best to organize our members combining both guild and community goals with player’s goals to reach a common ground and have the best experience possible, accomplishing goals while having a good time with our friends.


Are you currently recruiting? If so, what kind of players are you looking for?
Yes, we are actively recruiting. We open up our doors to a variety of members in the SWTOR community. We look for dedicated, respectful, friendly and active members that would make a suitable fit for our community. We have an application process and interview that allows us to educate the player further about our community and also to let us get to know the player and what they are hoping to acquire by joining our guild. We try to ensure that not only is the player the right fit for our community, but also that we are the right fit for them. Joining us is not an abnormally hard task, we are on the Web to meet new people and take the most we can from our players and the only way to do that is to recruit lots of different people with different focus. However, we are rigorous with our rules and do watch our members closely during the trial period, many new recruits tend to underestimate this fact and, needless to say they are no longer in our community today. We believe in consistency, commitment and stability, the values of our players need to match those of the community to ensure success.


Where can someone go to learn more about your guild?
To learn more about Jen'jidai you can visit our website (http://www.legend-gaming.net/jenjidai or http://www.jenjidai.com). There you will find our guild's news, our dogma, media (ranging from member's artwork, screenshots and videos), roster and our forums that have even more information and what our guild requires of all our members.


Anything else you would like to add?
I'd like to say how incredibly proud I am of what Jen'jidai and its wonderful members have achieved. They're an amazing group of friendly, like-minded and dedicated individuals who are incredibly fun to be around. In the end, a great guild is made up by its members and it's not about what bosses you've downed or how many people you have, it's about those people who make up the guild and make it a great community to be part of. I urge those who seek us out to come get to know all of us to see what we are about. I'd also like to take this time to thank you and Bioware for this opportunity.

We want to thank Luniara and all of Jen’jidai for taking the time to talk to us. Don’t forget, if you are interested in having your guild featured in the Guild Spotlight you can submit an application on our official forums right here.