Hi, I’m Gabe Amatangelo, Principal Lead PvP Designer, and I’m excited to tell you guys that Pre-Season One of Team Ranked Warzones is back on the Public Test Server! In the current Game Update 1.3 PTS build, you’ll find a new button in the Warzone queue window: Queue Team Ranked. This button is available to any player that is in a group of eight level 50 players, and allows that group to queue up for Team Ranked Warzones with a single click. Team Ranked Warzones can only be participated in by a full team of eight players. If any player drops out of the queue before a match is made, the team will need to find a replacement and re-queue.

We are also introducing a concept to Star Wars™: The Old Republic™ called ‘dual queuing’. With dual queuing, players will be able to queue for a normal Warzone, either by themselves or with a different group, while remaining queued for a Team Ranked Warzone with that group. 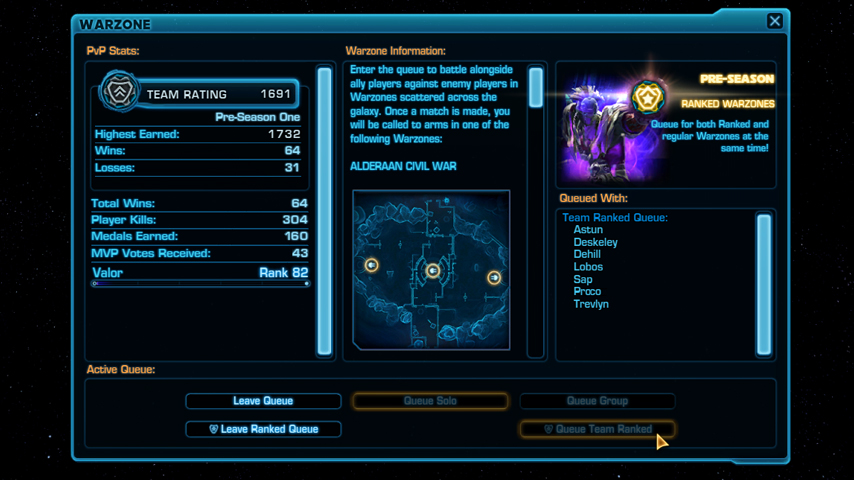 Also introduced in this build is Warzone group persistence. In other words, when you queue up as a group of up to four for normal Warzones or as a full team group of eight for Ranked Warzones, you will remain in that group at the conclusion of the match. We completely agree with you that this feature was needed for Warzones and is especially required for the Ranked Warzones feature when dealing with a full team group of eight players. We are excited to see the tech in place for it in Game Update 1.3.

A player’s Team Rating is not tied to a specific combination of players, but to the individual player, and is a measure of that player’s success when participating in full team queued Ranked Warzones. So you can queue up with an entirely different full team of eight players every match if you want to.

Ratings are adjusted when a player wins a match, loses a match, leaves a match early, or declines a match invite. Various elements factor in to the adjustment, including your team’s predicted chance to win the match, the ratings of players on your team, the enemy team, etc. In short, if the only match available is between skilled PvP players and unskilled PvP players and the unskilled players lose, their rating would not go down much, if at all.

Before Season One begins with official rankings, we intend to rank and post the players and guilds with top Pre-Season ratings. Season One will begin with completely new ratings. Additionally, we do intend to have a Solo Queue Ranked Warzone option in the future.

Those of you on the Public Test Server can now queue up for Team Ranked Warzones and test this feature out now. Be sure to submit any feedback to our PTS forum here.