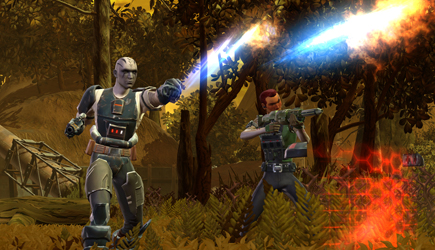 Welcome to this week’s Community Round-Up. Each week, we scour the forums, fan sites, and reddit, finding some of the most interesting discussions in the community as well as player-created events happening on servers in The Old Republic™.

If you have nominations for next week’s Round-Up, please post them in this thread.

Get to know the community on your server by participating in player-created events. Below are some occurring this week! Be sure to take a look at the Server Forums to find other events happening on your individual server.

Prophecy of the Five

Shipment 1 packs lost forever?: Musco confirmed that Shipment 1 will be leaving the Cartel Market for June 11th, but could return at some point in the future.

Stunbreakers reseting after death: Senior Designer, Rob Hinkle, tells players that we have decided to not reset stunbreakers after death based on player feedback.

The Companion Dialogue Location Index: iamthehoyden has continued to compile a list of Companion dialogue triggered at certain locations around the galaxy.

PC Voice Actors, Male VS Female: Players discuss which voice actors they prefer for each of the Classes.