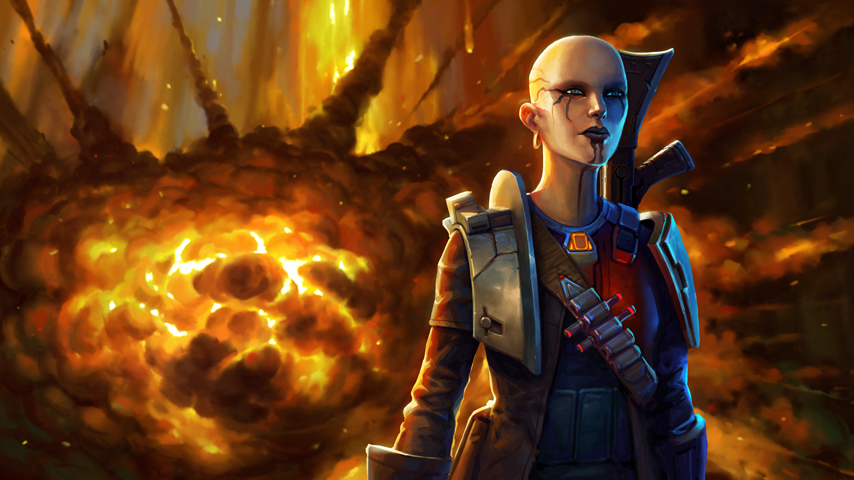 Anarchy in Paradise introduces a new ally, an infamous mercenary known as Firebrand. Her mission is to destroy the Eternal Empire by attacking Zakuul and crushing the seat of power, the Eternal Throne, by any means necessary. It will be up to the Outlander to decide just how far he or she is willing to go to beat the Eternal Emperor. Players will experience the grim consequences of their past decisions and feel the grip of the hand of fate on their dangerous journey.

The Knights of the Fallen Empire expansion pack launched in the fall, adding an epic, player-driven storyline that will continue to expand this year. For those who haven’t played, there has never been a better time to jump in as the storyline expands its cast of characters alongside unexpected twists and turns that will keep players engaged as they build their Alliance and prepare to confront the Emperor.

To find out more, visit www.StarWarsTheOldRepublic.com/Fallen-Empire.

* ACCEPTANCE OF END USER ACCESS AND LICENSE AGREEMENT ('EUALA'), PERSISTENT INTERNET CONNECTION, AND ACCOUNT REGISTRATION REQUIRED TO PLAY. MUST BE 13+ TO REGISTER. ACCOUNT IS NON-TRANSFERABLE ONCE USED. PAID SUBSCRIPTION, VALID AND ACCEPTED PAYMENT METHOD OR PAID GAME TIME CARD (IF AVAILABLE) REQUIRED TO ACCESS SUBSCRIPTION GAMEPLAY. PAYMENT METHOD AGE RESTRICTIONS MAY APPLY. SWTOR ONLINE SERVICE MAY BE DISCONTINUED. SEE EUALA FOR DETAILS. AGREEMENT TO SHARE ACCOUNT INFORMATION WITH LUCASFILM ENTERTAINMENT COMPANY LTD. ('LUCASFILM') IS REQUIRED TO ACCESS GAMEPLAY. GAME INTENDED FOR PLAY ONLY WITHIN NORTH AMERICA, EUROPE AND CERTAIN OTHER TERRITORIES. USE OF CARTEL COINS SUBJECT TO DIGITAL SERVICES AGREEMENT. PRIVACY POLICY AND TERMS OF SERVICE AVAILABLE AT WWW.SWTOR.COM. ALL TERMS AND CONDITIONS TO PLAY THE GAME APPLY AT ALL TIMES. SUBSCRIPTIONS MAY BE CANCELLED AT ANY TIME. SEE WWW.SWTOR.COM FOR DETAILS.