In every Studio Insider, we take you behind the scenes to give you an exclusive close look at the development of Star Wars™: The Old Republic™ and answer your questions about the game. This week, Concept Artist Diego Almazan tells us how he created the concept for this imposing Sith burial ground. Don’t miss the Community Q&A! This month, ask us your questions on Facebook, Twitter, and on the forums.

Make sure you don’t miss this week’s Fan Friday for fan creations, new smilies and avatars, and more! 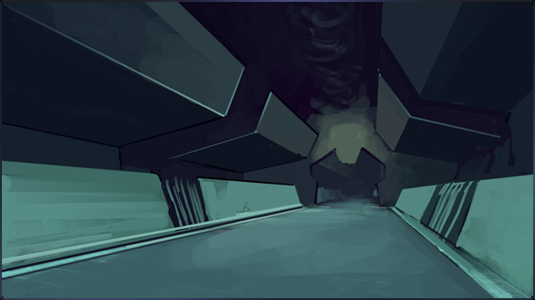 For this concept, I wanted to keep in mind that this temple is as much an ancient prison for the dead as it is a tomb or necropolis. It's dark, eerie, and foreboding, so I started with some basic shapes and colors that work in those ideas. I used big, strong shapes to signify power and resilience. 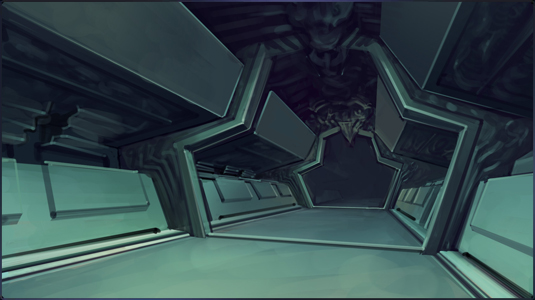 From there, I moved onto the breaks between those big shapes to feel out the type of details I wanted to include. The organic, sculpted patterns along the walls should portray something like a wicked incantation that would play a part in sealing away unlucky prisoners for eternity. 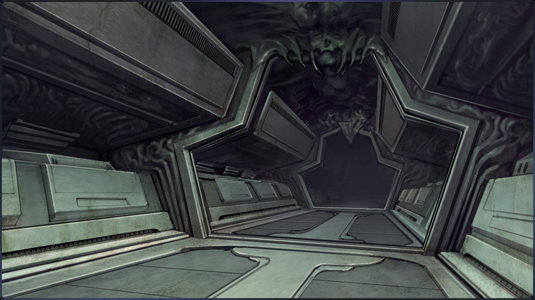 After touching up the details a bit more, I added other patterns on the floor and overhang. I also adjusted the overall color to simplify the process as I continued, and to provide a more readable version for the environment team once the piece is complete. 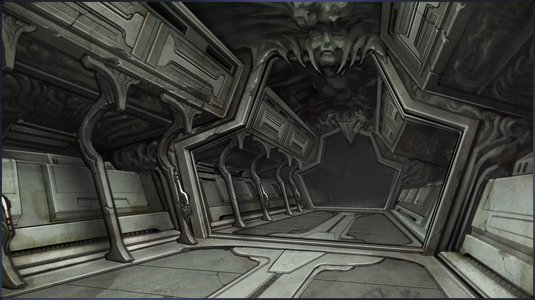 Up to this point the material had been a bit ambiguous, so I proceeded to add chips, cracks and discoloration to show how the stone has aged over time. I made the sculpture at the top a bit more faceted to push the stone look, while the pattern on the overhang was changed to be more decorative. The pillars add a nice aggressive touch, and function as a lock for tombs that should not be opened.

After the overall concept was finished, I moved onto the mood lighting. I brought that darkness back from before, but this time I dropped in a lamp to light the foreground. I also added in some different webs; some are old and dusty to help show age, while others are fairly new to show there are still some critters around. I bumped up some of the smudges and overall contrast and continued tweaking the color until I have what you see here! It's dark, gritty, and menacing. I love it, and hope you do, too!

Each month we’re taking time to answer some of the community’s questions about Star Wars: The Old Republic. Today, Rich Vogel, Executive Producer of The Old Republic and Vice President of Production, BioWare Austin, has answers to some of your questions:

Q: I'm worried that Force powers may be overpowered in comparison to non-Force users... Will this be a problem? (asked by Luke)

A: Every character class in The Old Republic will feel heroic. No matter what part of the game you’re playing, from Warzones to Flashpoints, there will be good reasons to play every class – it’s our intent that no one feels punished for playing the class they love.

Q: So far the Consular seems to be coming across as more of a support/healing role. I'm worried that the class will take the boring back seat in group battles. Will Consulars be pigeonholed into one role? (asked by Brian)

A: Consulars, like our other classes, will have more than one viable role to play. One of our goals is to provide players multiple options within their classes – you’ll be able to take your Consular in several directions, and you’ll be able to be useful in each role the class can play. We’ll have more information about the Consular (and the other classes) coming online soon!

Q: How friendly will this game be for solo players in the endgame? (asked by Benjamin)

A: The Old Republic has a lot to offer to players with many different playstyles, and we want to make sure there’s something fun in the game for everyone. Even if you don’t want to join a guild or participate in Flashpoints or other multiplayer content, we’ll have plenty in store to keep you entertained!

Q: Will players ever be able to make storyline decisions so radical that it changes their Faction alignment? (asked by Aaron)

A: At this time, we don’t plan on allowing characters to change faction as part of the class story. One of the main reasons for this is that it would interfere with your class story’s continuity. Every class has a detailed story that they progress through from level one until the level cap, and players will want to see how those stories unfold. That said, there is quite a bit of room for players to make dark and light side decisions throughout the game that affect your experience.

Q: Will TOR be designed to run on a broad range of hardware? (asked by Kes)

A: It’s important to us that The Old Republic can look great and run well on a wide variety of hardware configurations. To that effect, we’ve done as much as we can to create a compelling, detailed world that can scale easily based on your hardware’s abilities.

Q: Is there a jump button? (asked by Phillip)

A: Absolutely! Exploration and basic movement in the world definitely have to be fun on their own. Obviously, we expect players to be engaged in Combat and Story for most of their game time, but you will still need to get around and figure out how to get places. If you can’t jump, that takes away a lot of the “realism” of exploration.

Thanks for joining us for this month’s Studio Insider! We know you have many questions about The Old Republic, so this month, you can ask us your questions on our Facebook page, via Twitter, and in this forum thread. Please keep your questions courteous, and try not to ask questions that have already been asked by others. Keep in mind that we can’t talk about everything just yet, so don’t be offended if we don’t select your question. As soon as we can talk about something, we will!