We are very excited to release Game Update 2.7: Invasion today. We believe this game update captures some of the key elements that make Star Wars™ special: the struggle between galactic factions; engaging in dangerous and difficult trials that push you to the limits of your abilities; and being part of an epic storyline. Read on for highlights from this major update!

A new story arc begins with Forged Alliances: Part I, which includes two new level 55 Tactical Flashpoints: Assault on Tython and Korriban Incursion. This epic new storyline for Star Wars™: The Old Republic™ introduces two major characters – Theron Shan and Lana Beniko. The three part story will continue to be expanded throughout the year culminating in an incredible finale. 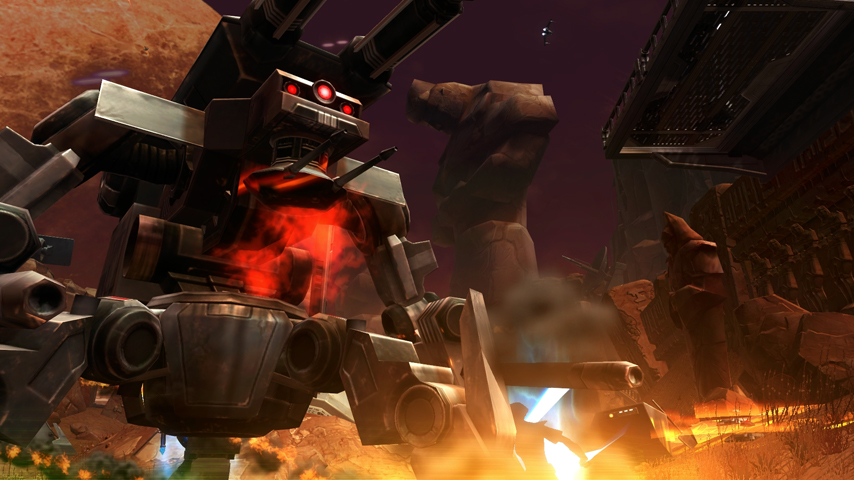 Dread Fortress: Nightmare Mode. Even greater horrors await those who wish to challenge the bastion of the Dread Masters at the extreme Nightmare difficulty setting, and even greater rewards in the form of new Dread Touched equipment!

New Galactic Starfighter Domination Map: Denon Exosphere! A space battle featuring massive Capital Ships is ongoing in the exosphere of the ecumenopolis Denon. Wreckage from the battle is scattered around the area as forces fight to control a strategic space station. This map features two permanent spawn points for each team, adding more strategic spawning and attack possibilities.

The End of PvP Season 1! Characters that had a qualifying rating will be mailed their rewards. Giradda congratulates the winners and looks forward to the bloodshed in Season 2! Season 2 will start soon but the Ranked Arenas are still available for you and your team to prepare for the next season. At the end of the PvP Season is also a great opportunity to make broader class updates, and we’ve done that. See the patch notes for all the gory details!

See you on Tython and Korriban!