HoloNet News now presents the conclusion of an exclusive interview with legendary Huttball host Baron Deathmark. In part one, Deathmark reflected on his storied career, hinted at future plans, and took chief correspondent Lamalla Rann on a tour of his Nar Shaddaa luxury penthouse. In part two, Deathmark and Rann leave the signature skylines of Nar for exotic locales across the galaxy in order to preview Giradda the Hutt’s latest gladiatorial venture: Warzone Arenas.

LAMALLA RANN: Baron, what can you tell me about the so-called “Arenas of Death”? What makes them stand out from Huttball?

BARON DEATHMARK: I’m so glad you asked that, Lamalla! A lot of folks out there assume that all Giradda’s doing is taking the ball out of Huttball, and that just isn’t true. That would leave nothing but a bunch of Frog-Dogs and Rotworms running over goal lines, and who wants to watch that?!

LR: I’m guessing no one?

BD: No one. Exactly! No, what Giradda’s done here is remove nearly every last rule from the equation, so what you’re left with is a clash between two teams of four dedicated, merciless, tough-as-durasteel warriors duking it out until only one side’s left standing! LR: Wow. That sounds… intense. And so, looking at this arena here— Are those Galactic Trade Network terminals?

BD: They are, but they’re no longer functioning. In our early game trials here at this space station, which Giradda won on a bet, we found that competitors wound up spending most of their time on the GTN shopping instead of killing!

LR: This was the first Arena of Death?

BD: Yes, the original! But since Giradda enjoys travel so much, he decided this one arena wasn’t enough and started franchising across the galaxy! 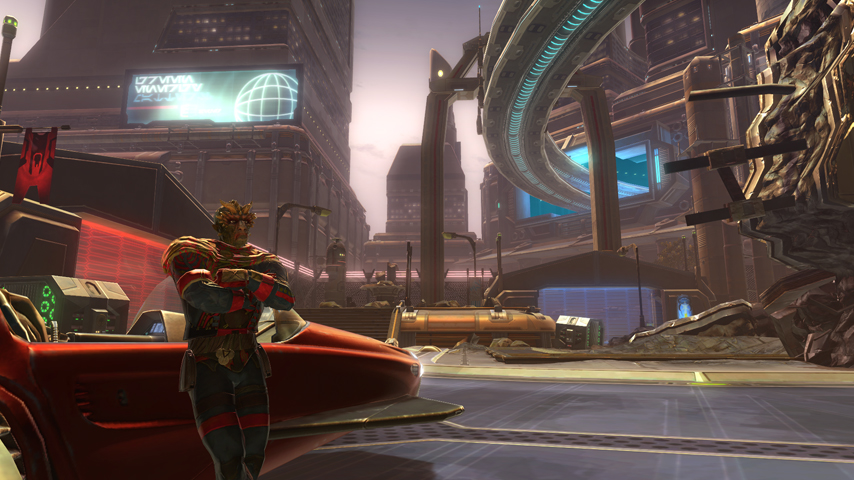 LR: And that takes us to the galactic core. Why choose Corellia, of all places?

BD: Anywhere you find a great deal of turmoil, you’ll also find people hungry for entertainment. The truth is this part of the planet was already being used for unlicensed combat sports. Giradda bought the area outright, put down a fence, and made it official!

LR: It must have been an inexpensive endeavor, considering the land values around here.

BD: Unless it’s my paycheck, I never talk credits with Giradda. I just rile the crowd and call the shots! LR: Here on Tatooine, now… what’s so special about this moisture farm?

BD: It’s an Arena of Death now—that’s what’s special about it to me. For Giradda, though, it’s more personal. This farm was willed to him by one of his debtors, who tragically perished when a starship mysteriously crashed into his dwelling. After a brief but respectful period of mourning, Giradda turned the farm into an official arena, complete with luxurious skyboxes built into the rock face!

LR: Are these arenas you’ve shown me the only arenas?

BD: Not even close! These no-holds-barred centers of action are going to sweep the galaxy with their stripped-down format and immeasurable brutality! Giradda has big plans for the sport, and I’m proud to be a part of it.

LR: I can tell. Thank you for your time, Baron.

BD: No, no—thank you, Lamalla! And, on a very serious note, I’d like to thank all my fans. I wouldn’t be where I am today if not for them. And I’d like to remind them that they, too, can dream big, just like I did. All they need is to take that big first step, and they can take that step by purchasing the upcoming Baron Deathmark’s Huttball for Health Workout... of Death!

LR: [Laughs] I can’t think of a better way to end this interview. Across the galaxy and into your world, I’m Lamalla Rann for HoloNet News. Good day to you all.

Lamalla Rann is an award-winning journalist and author. Her most recent holobook, “Missing the Mannett Point: The Mantellian Civil War Revealed”, is currently the top-selling nonfiction work of the year.