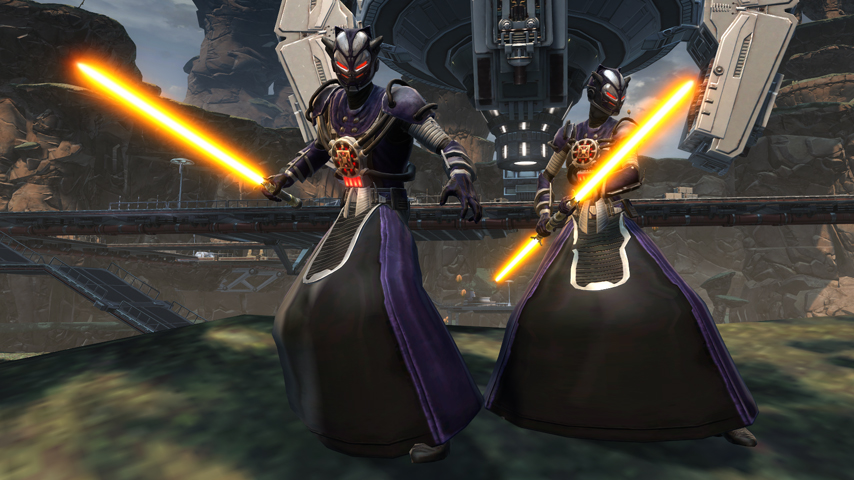 Hello everyone. My name is Austin Peckenpaugh, and I’m a Senior Designer on Star Wars™: The Old Republic™, responsible for class design and combat systems. As such, I’m here to shed some light on the changes to the Sith Inquisitor class in Game Update 2.0.

We’ll be writing about recent class changes coming to The Old Republic, but this time we’re going a little more in depth and taking on one class (for both factions) at a time.

Alacrity Improvements: One of the big changes to combat systems is the way that Alacrity works. Prior to this update, Alacrity came with a tradeoff for some classes, and it was nearly useless to other classes. The faster you attacked, the more resources you would spend, and that only worked if you had channeled abilities or abilities with activation times.

Now, Alacrity will increase the activation speed of all abilities, including instants. We haven’t just shortened the global cooldown, either. When activating any ability quicker, its animation will also play quicker. This makes some attacks look and sound very cool. Furthermore, Alacrity increases resource regeneration by the same rate, helping you to recuperate resources more quickly as you spend them more quickly. Now more Alacrity is strictly a good thing.

DoT Improvements: We’ve changed the way we evaluate damage over time effects, so it should now be less costly to keep your DoTs up and to spread them around.

Shield Improvements: We’ve changed the way shields work to allow them to absorb any incoming kinetic or energy damage regardless of the source (melee, ranged, Force, tech – doesn’t matter). This has significantly increased the importance of shields, and the game has been rebalanced to account for such a major adjustment.

Accuracy Matters: In 2.0, all Elite (gold star) and tougher enemies will have additional defense chances against Force and tech attacks. As a result, Accuracy Rating will play a pivotal role in optimizing your sustained damage in boss fights. Prior to 2.0, Accuracy Rating was valued very differently from class to class (or even spec to spec), and while it’s still different for each class or spec, that difference is now much smaller. In effect, all damage-dealing roles will find Accuracy Rating much more useful than before.

Below are some additional details on changes made to the Sorcerer’s skill trees. Many more skills than the ones mentioned here have changed; these are really just the highlights.

Prior to 2.0, Corruption didn’t have much in the way of unique utility. In fact, many Corruption Sorcerers forwent their high tier skills to pick up some of Lightning’s utility. This is usually a sign that things in your main skill tree aren’t attractive enough, so we set out to address that.

Lightning has gotten a few major changes in 2.0 that should improve their gameplay considerably. However, we’ve also made considerations for how Lightning affects the rest of the game (other player’s gameplay) through Backlash.

Below are some additional details on changes made to the Assassin’s skill trees. Many more skills than the ones mentioned here have changed; these are really just the highlights.

Darkness is a demanding tank role to play, and we’ve been hard at work trying to improve their usability without “dumbing down” their gameplay. In 2.0, the skills in the Darkness tree should do a better job of encouraging the right ability use and making playing a Darkness tank more intuitive.

Our goals with Deception for 2.0 are to improve upon their single target damage and sustained damage without adversely affecting their burst damage.

Prior to 2.0, Madness Assassins had a laundry list of ability priorities. For better or worse, playing Madness correctly as an Assassin was pretty daunting and exhausting. We wanted to take 2.0 as an opportunity to reevaluate Madness’s priorities one ability at a time. We are aware that some players will be disappointed to learn that Madness’s “rotation” has been simplified as a result, but their existing gameplay left little room for growth (on our side) and little room for error (on your side).

Now in 2.0, Madness Assassins can get the same results with a smoother, less complex list of abilities and ability priorities. We like that we can make these kinds of gameplay adjustments with the time we have, but we’re also sensitive to what can be perceived as “fundamentally” changing a spec. We don’t believe we’ve fundamentally changed Madness Assassins as they are still very much drain skirmishers, but we will be keeping an eye on how Madness Assassins get played and on player feedback. We’re confident that the changes we’ve made will actually make Madness Assassins a more attractive option to players that were previously turned off by their complexity.

Game Update 2.0: Scum and Villainy and the Digital Expansion: Rise of the Hutt Cartel are now live with the changes above. Please keep in mind that we are always looking at class balance so let us know how you like the changes we have made. I hope the information I could share with you today has helped shed some light on what’s changed and why we changed it. Thanks for reading!