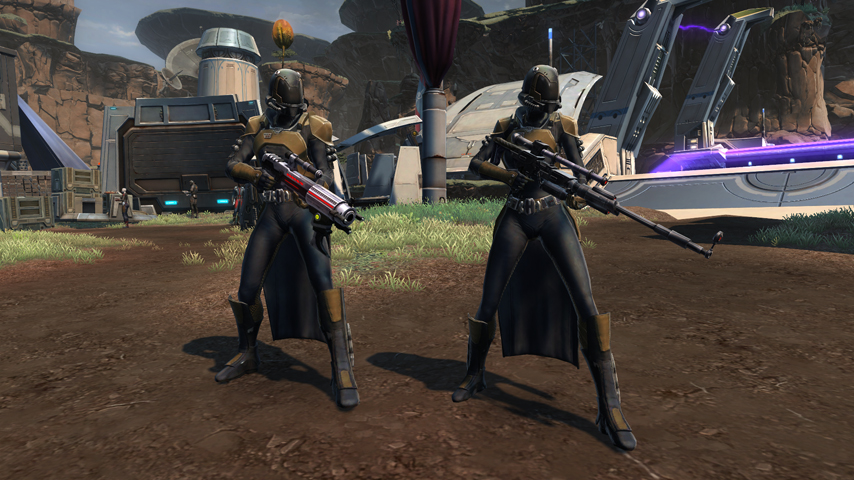 Hello everyone. My name is Austin Peckenpaugh, and I’m a Senior Designer on Star Wars™: The Old Republic™, responsible for class design and combat systems. As such, I’m here to shed some light on the changes to the Imperial Agent class in Game Update 2.0.

We’ll be writing about recent class changes coming to The Old Republic, but this time we’re going a little more in depth and taking on one class (for both factions) at a time. If we haven’t covered your class yet, do not despair; it will be covered in the coming days.

Alacrity Improvements: One of the big changes to combat systems is the way that Alacrity works. Prior to this update, Alacrity came with a tradeoff for some classes, and it was nearly useless to other classes. The faster you attacked, the more resources you would spend, and that only worked if you had channeled abilities or abilities with activation times.

Now, Alacrity will increase the activation speed of all abilities, including instants. We haven’t just shortened the global cooldown, either. When activating any ability quicker, its animation will also play quicker. This makes some attacks look and sound very cool. Furthermore, Alacrity increases resource regeneration by the same rate, helping you to recuperate resources more quickly as you spend them more quickly. Now more Alacrity is strictly a good thing.

DoT Improvements: We’ve changed the way we evaluate damage over time effects, so it should now be less costly to keep your DoTs up and to spread them around.

Shield Improvements: We’ve changed the way shields work to allow them to absorb any incoming kinetic or energy damage regardless of the source (melee, ranged, Force, tech – doesn’t matter). This has significantly increased the importance of shields, and the game has been rebalanced to account for such a major adjustment.

Accuracy Matters: In 2.0, all Elite (gold star) and tougher enemies will have additional defense chances against Force and tech attacks. As a result, Accuracy Rating will play a pivotal role in optimizing your sustained damage in boss fights. Prior to 2.0, Accuracy Rating was valued very differently from class to class (or even spec to spec), and while it’s still different for each class or spec, that difference is now much smaller. In effect, all damage-dealing roles will find Accuracy Rating much more useful than before.

Better Evasion, baseline: Evasion now removes all hostile removable effects for any Agent, including the Sniper. This used to be reserved for Operatives only, but we’ve added the ability to Evasion, baseline, so that Snipers can also benefit from this effect.

Below are some additional details on changes made to the Sniper’s skill trees. Please keep in mind that these are just the highlights and other skills, not mentioned here, have been changed.

Alacrity was one of those stats that should have benefited Marksmanship greatly, but in addition to the old Alacrity system’s shortcomings, reaching certain Alacrity levels could make you wait awkwardly on Followthrough’s cooldown. Now that Alacrity is a very useful stat for Snipers, especially Marksmanship, it has become critically important for us to make Followthrough play well at all Alacrity levels.

We like that Engineering has a strong niche role in AOE (area of effect) damage, but we really want to dispel the perception that they can’t deal competitive single target damage. To that end, we’ve made it easier to focus in on one target by freeing up Interrogation Probe. We’ve also reduced the downtime between Explosive Probe -> Cluster Bombs -> Series of Shots combo chains.

Lethality has a lot of consistent and reliable damage, but we’ve injected them with some new gameplay to help spice things up.

Below are some additional details on changes made to the Operative’s skill trees. Many more skills than the ones mentioned here have changed; these are really just the highlights.

One thing we really wanted to address for Medicine was their options. Medicine has always been great at what it does, but a few great abilities have edged out the other options in what should be a great spread of abilities. This led to the perception that Medicine Operatives had a fairly narrow, limited role.

Game Update 2.0: Scum and Villainy and the Digital Expansion: Rise of the Hutt Cartel are now live with the changes above. Please keep in mind that we are always looking at class balance so let us know how you like the changes we have made. I hope the information I could share with you today has helped shed some light on what’s changed and why we changed it. Thanks for reading!