Developer Blog: The Art of Makeb 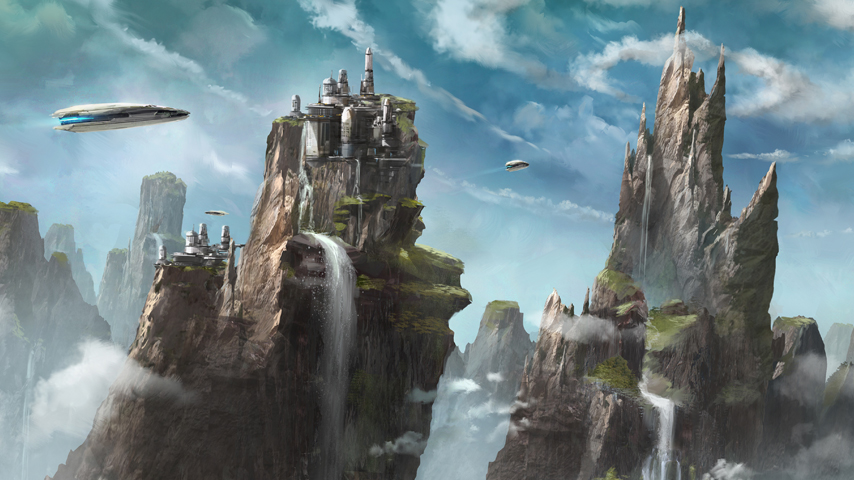 So, now that you’ve read Charles’ blog on the story behind Makeb, you’re probably wondering about how we went about choosing the look of the planet. After completing the main storyline in Star Wars™: The Old Republic™ and a few of the darker story events, the writers here at BioWare wanted to start fresh when it came to our first Digital Expansion. Makeb is our first new planet since launch and the artists couldn’t wait to get started. Guided by the imagination of our amazing writers, the concept team dove in to explore a number of visual directions. 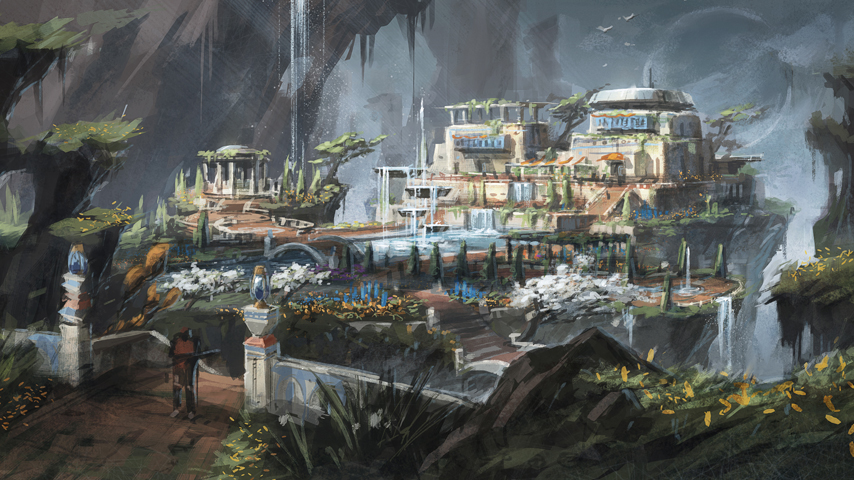 Makeb is tucked away and off the beaten path, cosmically speaking. This exotic and affluent resort planet is known for its towering natural spires, highly appointed cliff-side homes, meticulously maintained gardens, and accented with marble statuary. When exploring the look for Makeb, the concept team was naturally drawn to the timeless beauty of the Mediterranean while combining the sleek elegance of Cloud City. These main visual cues and goals drove the team to create all new art assets for the entire planet. Nearly every environmental prop, building, rock, tree, and twisted piece of metal conduit was concepted and built exclusively for Makeb. Even our tech art team got into the action and created all new material shaders that improved the graphic quality of our waterfalls and environmental blending. 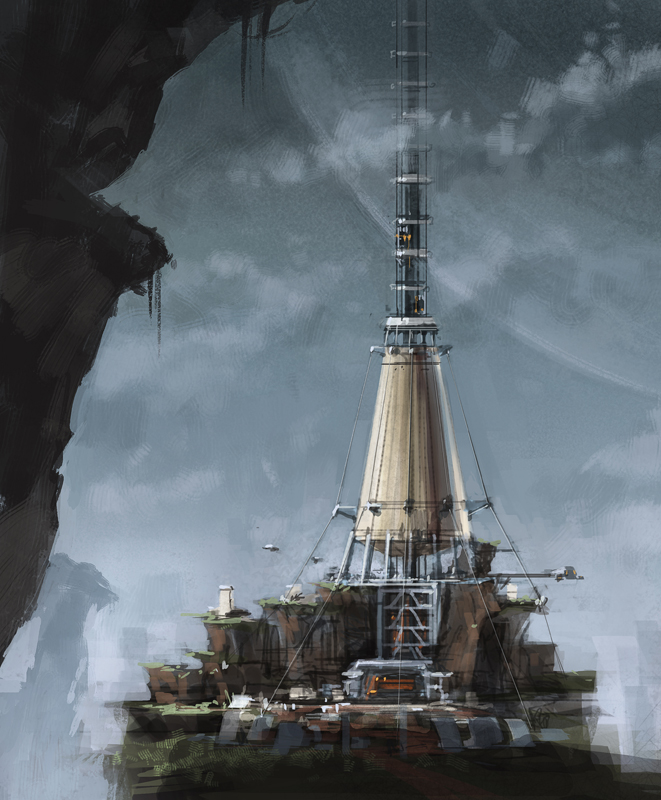 As the story for Makeb unfolded, it became clear that the planet’s main visual points of interest (POI) would be playing a major visual roll in defining the look. Many concepts for POI’s were created, discussed, tweaked, and changed. Once a design was approved, it went to modeling, texturing, and then placed in the world. One of the iconic POI’s for Makeb is the Gravity Hook space elevator. A number of these space elevators are scattered over the entire planet and used for surface to space transport of goods, supplies, and the rarest mineral in the galaxy, Isotope 5. When building out a Gravity Hook, our environment artists propped the area to resemble a bustling shipping station where workers, vendors, and travelers of Makeb could trade, shop, or take a trip to the space station at the other end of the line. 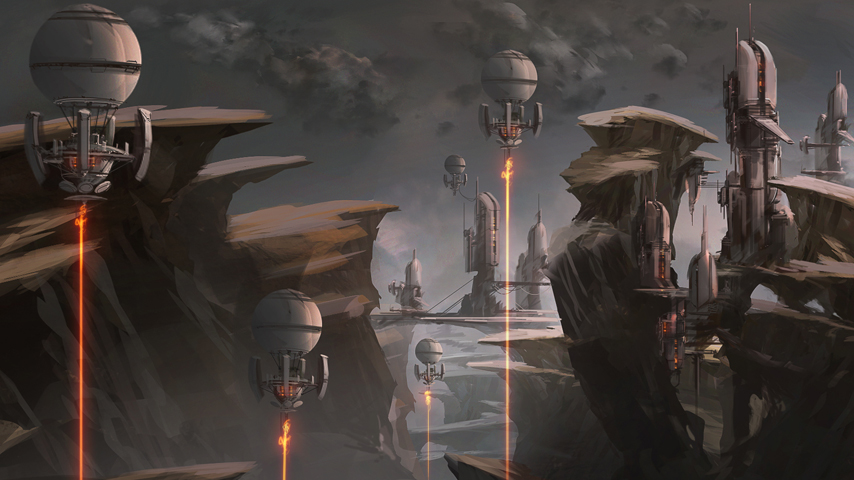 Much of the great wealth and prosperity of Makeb comes from the rich deposits of Isotope 5 located deep within the spires of this planet. When building the planet, the artists needed to show the lush and opulent side of a prospering city while also showing the results of the aggressive mining practices brought on by the Hutt Cartel since their occupation. The effects of careless mining, blasting, and exploitation that follow the Hutts can be seen on one of these mesas. When concepting and building The Mining Mesa, the artists definitely wanted to create a unique visual experience that was quite different than the lush and beautiful Makeb you are first introduced to. The Mining Mesa’s dry, barren, and rocky terrain is constantly being blasted from the massive mining spheres that float above this dig site. The environment team built out makeshift work sites constructed from modified cargo containers and tents. Scaffolding was placed to support massive rocks and the stone spires that dotted the landscape. The shattered rock and cracked mud textures in this mesa greatly contrast the lush grasses and moss found in the city mesas. 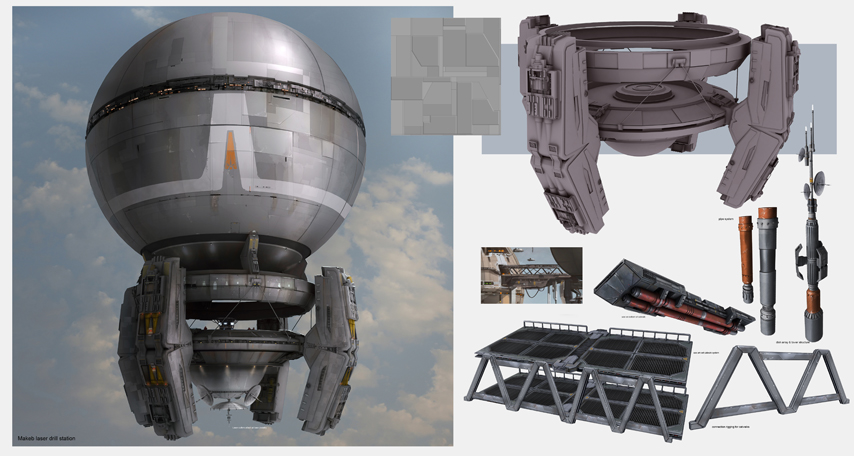 The damaging effects of the Hutt’s aggressive mining practices caused frequent and devastating quakes all over the planet. To visually communicate this, the environment team created a number of destroyed areas that had fallen victim to these seismic events. 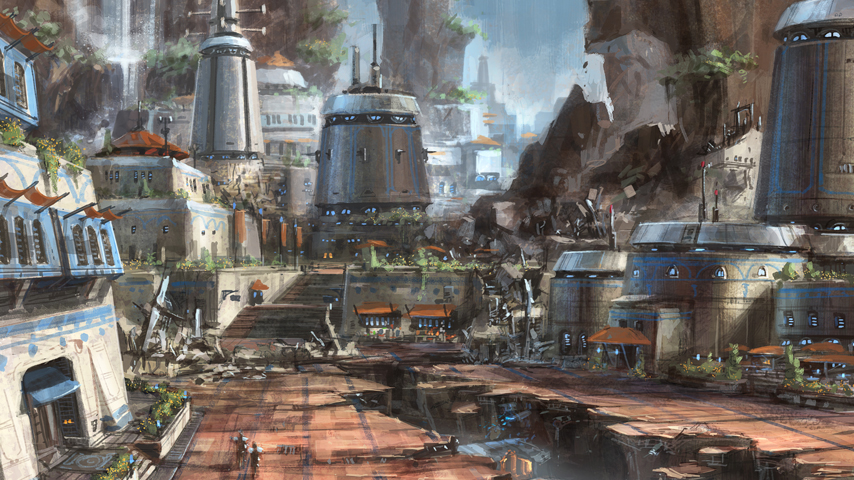 On top of creating all new assets for Makeb, the art team also needed to create damaged and destroyed versions of many of these assets. While the planet of Makeb crumbles, the citizens have taken up arms against the oppressive occupation of the Hutt Cartel. The Hutt’s corrupt control over the Makeb Militia can be seen in the propping and check points that have been built over the entire planet. Our environment artists built out battlefields and war torn cityscapes using destroyed buildings, props, shattered tiled streets, fire and smoke effects. Every detail was hand placed and helps tell the greater story of this planet. The look of Makeb was driven by the story and crafted for game play. Many artists put long hours into creating Makeb and we hope you love this planet as much as we do. 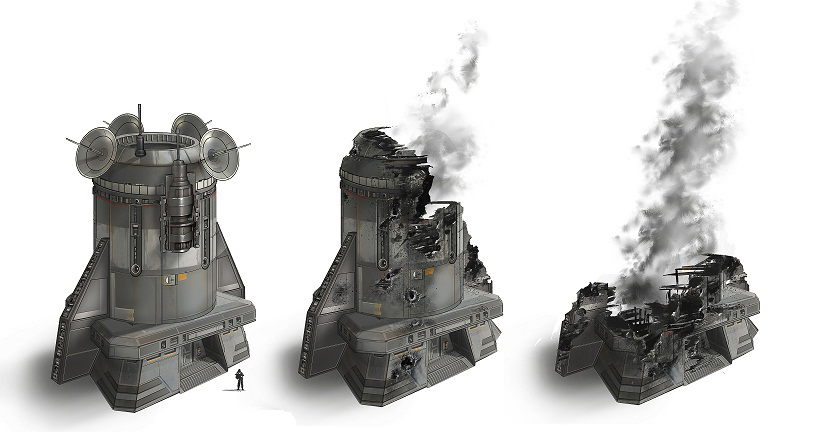