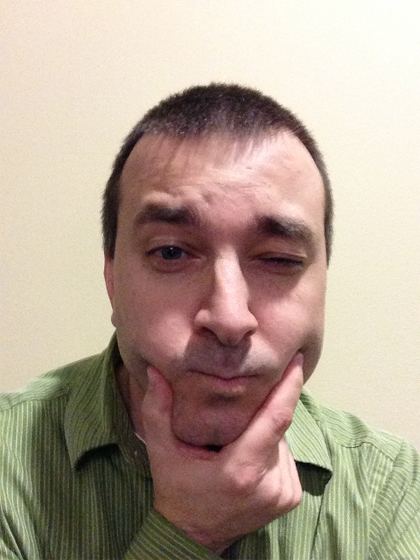 Welcome to Meet the Developers! For this installment, we interviewed Jonathan Crow, Gameplay Analyst for Star Wars™: The Old Republic™. In each “Meet the Developers,” we introduce a developer and ask them questions about their background, what they’re working on, and what they do for the team. After the interview, we will set up a thread on the forums so you can ask our featured developer further questions. Here’s our interview with Jonathan:

What class(es) do you play? Light side or dark side?

I’ve played both sides, with my first character being a light side Imperial Agent. Then, I switched over to the Republic side and leveled up a Sage. I’ve tried all of the classes though, and am currently having fun with both tanking as a Juggernaut and DPSing as a Gunslinger.

What’s your favorite part about The Old Republic?

I love the personal story. If you haven’t done the Imperial Agent story, you’re missing out. Lately I’ve developed a real liking for PvP. It’s a lot of fun picking targets with a Gunslinger - I guess working closely with the PvP team is rubbing off on me.

Without revealing anything about the story, then end of Chapter 1 in the Agent story was a clutch moment where you had to make a major choice that had a significant moral implication. It felt very thrilling.

What does a typical day look like for you?

Most days I work on two activities:

1. Monitoring the health of the game via a series of dashboards that we developed to track some of the important key performance indicators for the game (keeping track of daily logins, game economy, engagement in Operations and Warzones, etc).

2. Working on deeper-dive analyses associated with specific areas of play (such as comparing player deaths to boss kill rates between Operations) to help the development team assess whether a certain feature or piece of content needs to be modified to maximize the engagement and enjoyment of the player base.

Since Terror from Beyond is top of mind for a lot of people, why don’t I share a few stats about it? One of the charts we use as a means to gauge engagement in various areas of content is the % Area Time Spent chart. The chart below shows the percent of time level 50 players spend in each major content area in the game. You’ll notice two changes in this chart. The first is a major spike in time spent on planetary content around mid-August and another is a spike in time spent in Operations post Game Update 1.4 (which is when we released Terror From Beyond). When we released the Grand Acquisitions Race, we had a huge influx of level 50 players on Nar Shaddaa, Coruscant, and Dromund Kaas as they went about collecting tokens and completing missions so they could get some of the fun event stuff like the new pet and the Sand People moddable gear. This event had the desired effect of getting people to leave the Fleet and go run about the galaxy mingling with other players of various levels. More importantly, on September 26, we released Terror From Beyond. The result was a significant spike in the number of level 50 players spending time in Operations, which again was our desired effect. What’s even better is that this trend has been sustained for a month so far. We’ll be keeping an eye on that to see what the long term effects are. 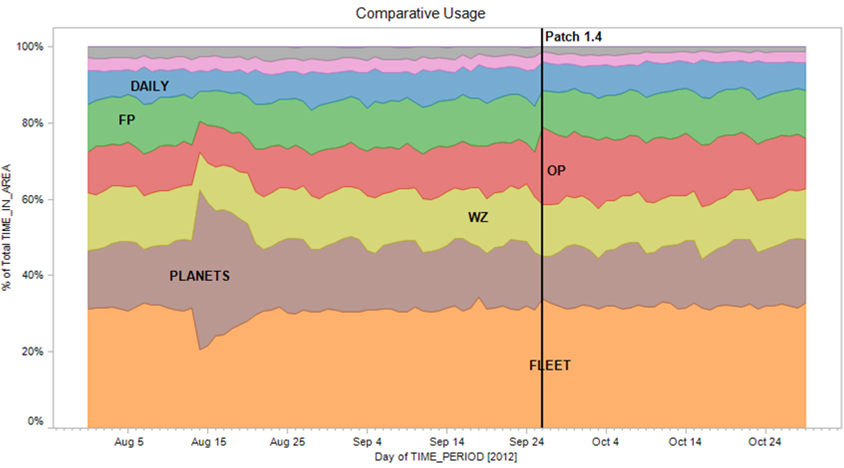 How do you work with the developers? Can you give us an example of something your work helped inform?

The data I presented to you above is only a small part of a greater report that I published internally to our development team so they could gauge how well Terror From Beyond performed compared to other Operations and which elements were successful. Another example is an analysis I did on crafting and how players are engaging in it to help determine which direction the team should take with new content development.

Do you also take player feedback (like on the forums or social media) into account when looking at data?

As mentioned above, we have tools we use to scrape and parse both social media sites and internal social data (such as chat logs and even customer service tickets). We use these to help quantify the size of a given issue related to gameplay. The Community Team also helps compile information for the developers, and we look at all of this.

We hear more and more about analysts, economists, and other similar fields getting involved in the game industry. Why do you think this is happening? What kinds of benefits do players see from it?

Every industry can benefit from solid analytics support. What we do as consultants is provide many of the needed answers that help shape the direction of gameplay development, marketing, and finance. The key is to discover the insights that can help both address the major needs of our customers as well as optimize existing processes in order to provide a smoother gameplay experience. In the end, we strive to provide a win-win scenario for both the player (better gameplay experience) and the company (more paying customers).

What is your favorite part of working on an MMO?

My first MMO experience was with Star Wars Galaxies, and shortly after that with World of Warcraft. I’ve been on the consumer side of this equation for a very long time and relish the opportunity to use my talents to better this thriving industry. I get to analyze data on a subject I am passionate about and work amongst people who can appreciate my passion for these games. My previous job was doing predictive analytics and data mining for Hallmark Cards, and while the company and people there are phenomenal people, I always felt like the odd man out. Here, I get to be myself and don’t have to hold anything in. I even get to occasionally help some of the developers test new content, which is a lot of fun.

What is the most challenging part of your job?

The most challenging part of my job is getting the right data for the right analysis. I sometimes spend the entire day writing SQL code in order to pull and shape the data from the data warehouse so it can be more easily used. Still, there is something really rewarding about writing the SQL code and seeing the data emerge exactly how you want it, because you know you are one step closer to getting to the insight you’ve been going after for a while.

How did you get into the video games industry?

To be honest, I’m still surprised about how that happened. I was happily employed at Hallmark and as any other fan, was keeping a close look at the development of Star Wars: The Old Republic. Out of curiosity I thought I might check their career site. I sometimes do that just to see what kind of jobs they offer, not thinking that anything would be available for someone like me. I stumbled onto a job posting on the Bioware site that asked for a Gameplay Telemetry Analyst. My curiosity was piqued and I clicked on it only to discover that the job description was very similar to what I was doing for Hallmark but on a video game rather than greeting cards. I applied for the position thinking I didn’t really have a chance in the world and then went about my business. Two months later, out of the blue I got this phone call, asking if I would be interested in a phone interview with someone at Bioware. My jaw hit the floor and once I was able to lodge it back in place I agreed. The phone interview went well and I was asked to come in for an in person interview. I guess I must have made a good impression since they offered me the job. The rest is history…

Do you have any advice for people interested in analytics?

If you have an interest in analytics, I would recommend a few things:

1. Learn some statistics. Many colleges or universities have operations research programs that give you a good grounding in stats.

2. Learn SQL. More and more the business world is gathering data on consumers and it is becoming increasingly difficult to navigate this sea of data. People who are able to write code that can sift through large data and shape it into what is needed for analysis are in high demand these days, especially if they can also do the analysis and reporting on the back end.

3. Learn how to present data in a visual way that speaks to the people you are sharing the data with. This means learning about data visualization tools such as Excel, Tableau, and Microstrategy.

4. Be curious. When I’m not working on a report or ongoing analysis, I often just start to write down thing I might be interested in knowing about, and just start digging into data to see how the data might relate to it. This serendipitous exploration can often lead to some very useful insights.

5. Be well-versed in what you want to analyze. One of the things that does matter to us when we look at new hire potentials is how much experience they have as a consumer of MMOs. The MMO industry is fraught with a plethora of idioms and expressions that players and developers are familiar with, and it is important to be able to speak and understand the “language” so you can make communicating easier.

I do have hobbies outside of gaming. First and foremost, I have a wife and three kids. They are my primary hobby, above anything else. Beyond that, I like to play golf and have picked up playing Magic the Gathering again since there is a group of MTG fanatics here at Bioware. I also recently picked up brewing. This week I’ll be bottling a Turkish Coffee Stout, which should be ready for consumption right around Thanksgiving. I’m looking forward to the end of the month with great gusto!

Thanks for checking out our Meet the Developers blog. If you have any questions for Jonathan, please post them in this forum thread. We’ll choose questions that relate directly to Jonathan and his responsibilities. In the near future, we’ll have some answers from Jonathan to your questions!