Playing director in the Star Wars™ universe is one of the coolest jobs anyone could wish for. As a lifelong Star Wars fan, being able to visualize scenes with Bounty Hunters, Smugglers and Jedi harkens back to my days as a kid creating Star Wars films with a home video camera and a bin full of action figures. This passion for Star Wars filmmaking has come full circle – as I completed cinematic design work on Mass Effect 2, I was asked if I had an interest in working on Star Wars™: The Old Republic™. Needless to say, I jumped at the chance to be a part of the team!

So, what is Cinematic Design?

This is a question I get asked a lot. To put it simply, Cinematic Design is using cinematic presentation to facilitate narrative and gameplay, and heighten emotional involvement. By the use of a directed camera, we’re able to make the story real to the player, allowing them to get involved with the characters and make meaningful choices. 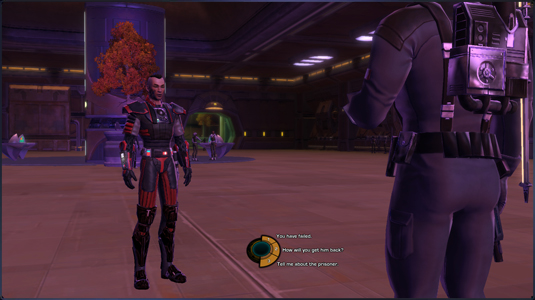 The inclusion of Cinematic Design is what sets The Old Republic apart from other MMO games. Rather than being led by a disjointed, text-driven narrative, the Player is part of a dynamic plot in The Old Republic. In conversations, we can show those subtle moments where characters interact with and affect one another; where choices matter. Do we kill the Sith acolyte? Do we spare him? Will he show up later in our character’s path to be dealt with? Or will he fight alongside us, supporting us in the most crucial of times? These choices are gameplay, presented in cinematic form. Sure, they could be made through the use of simple point-and-click, text-only interface, but the reward of our choices would be passed over and the player would never fully experience the impact of those decisions.

Other BioWare games have proven how rewarding interaction in conversations can be. In The Old Republic, we extend this approach to the group level – every player in the party has their say in which direction the conversation will go. A young exile takes an adversarial tone with the group, and challenges them to a duel. Your Sith Inquisitor grows impatient with him and chooses to detonate some nearby explosives – but will it be overruled by another who votes to fight him? Beyond advancing your story, this system extends the gameplay experience into conversations, allowing the vote roll to factor into how the narrative plays out. 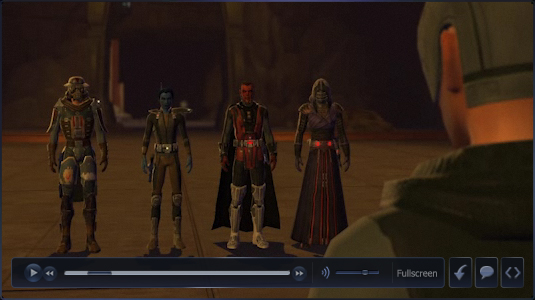 A Day in the Life of a Cinematic Designer

A Cinematic Designer puts on their director’s beret for each scene they work on. Is this a scene for the Jedi Consular? It will most likely be a quiet, emotionally-centered setting, focusing on the difficult choices ahead. Or perhaps it’s a scene for a Bounty Hunter who confronts an obnoxious nobleman and has to choose the best way to extract the information he needs. For each scene, the approach is similar to that of a live-action shoot. The Cinematic Designer reviews the script, considers what actors are involved and what location the incident takes place in, and ultimately answers the question “What does the player need to know once the scene has ended?” To ensure that we produce exceptional scenes, designers work closely with other departments. Nearly every discipline in the studio works with Cinematic Design in some capacity. If there are questions about characters and how the scene plays out, the designer reaches out to the Writing team to make sure their take on the scene is on-target. If the designer needs a specific animation captured for the scene, they speak with the Animation team and review capture data for the shot they're putting together. Having access to such a large range of world-class talent really helps shape our cinematics into memorable experiences.

Once all of this information is gathered, the Cinematic Designer can compose their work. We have access to a wide selection of Star Wars music and sound effects, one of the largest animation libraries ever compiled for a game as well as the most voiceover dialog ever recorded for any entertainment project, and it’s our job to put all of it together to create powerful scenes.

Each conversation we produce is considered from all three points of view. As a director, we consider things like: how do I shoot the scene? Does the location support the action that needs to take place? As a game developer: how does the scene work within the game around it? And ultimately, as a player: how does this fit within the larger context of my game experience? Is this scene memorable? Do I understand what’s going on? Each of these perspectives help craft how the game's narrative is presented and remembered. Creating these moments for the player is probably the most rewarding part of being a Cinematic Designer on The Old Republic. As I mentioned earlier, the cinematic presentation of narrative can turn the simplest event into a pivotal moment. It's this crafted layering of camerawork, performance, direction and gameplay that allows us to emotionally invest into the characters and the world around them. To put a romantic spin on it, the Cinematic Design team members are the visual composers of this chapter of the Star Wars universe, developing scenes that players will remember for years to come. We hope you enjoy what’s in store as much as we enjoyed telling it.

Thanks for reading and may the Force be with you.