Galactic Season 1: The Stranger from Kubindi

As we announced earlier this year, Game Update 6.3 “The Dark Descent” is introducing a new system called Galactic Seasons! The first season that players will experience is The Stranger from Kubindi. Throughout the next five months, players will be able to earn new and exciting rewards by actively completing Daily and Weekly Priority Objectives. The reward structure is split into two separate tracks: one is available for all players, no matter their Subscription status, and the second reward track is for Subscribers. We have a lot to discuss with this article, including Galactic Season Points, Daily/Weekly Priority Objectives, rewards, and much more! 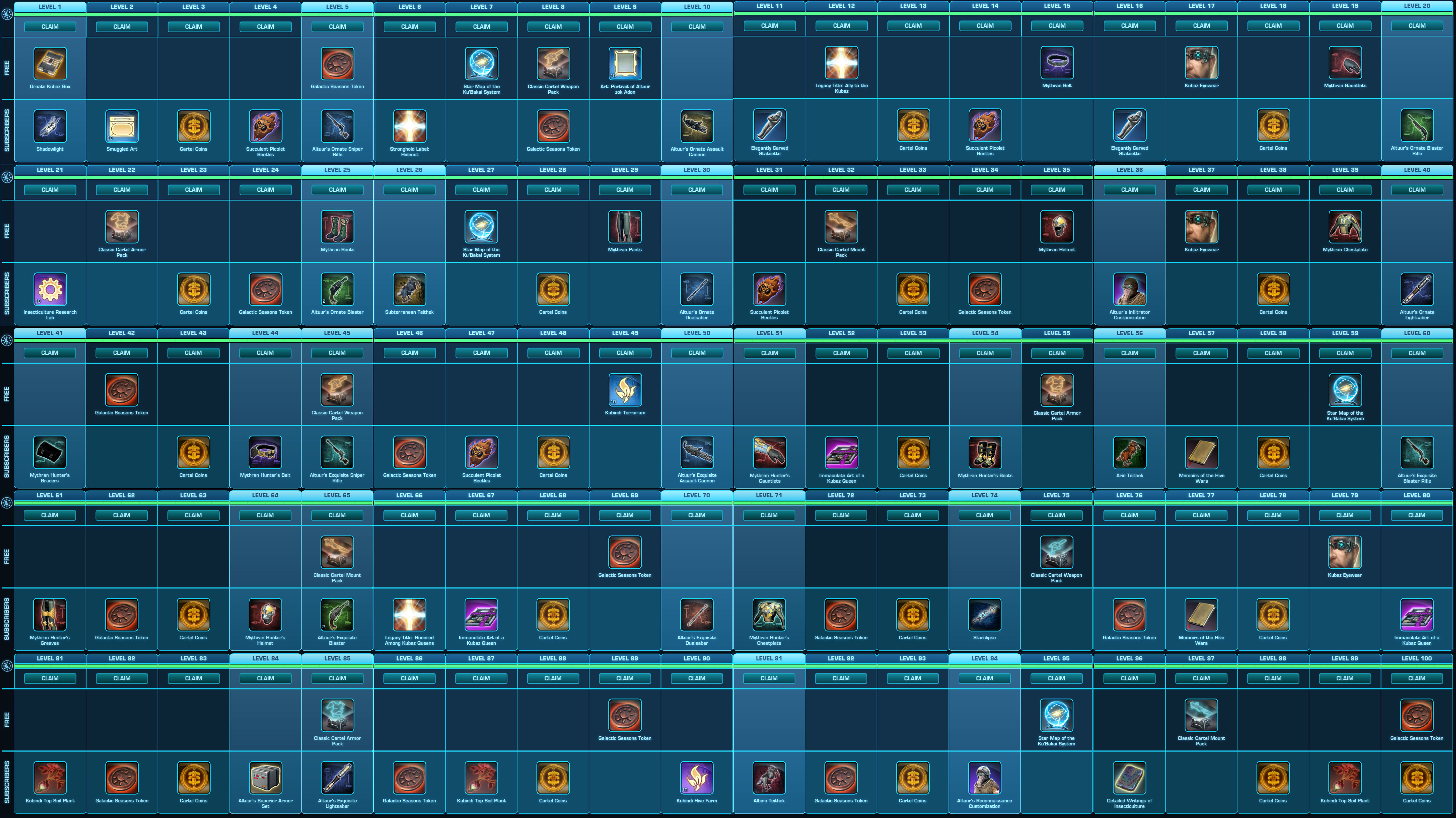 While Subscribers earn points at a faster rate, Free-to-Play and Preferred players will still be able to reach Reward Level 100 of Galactic Seasons, as long as they are diligent about completing Priority Objectives and logging into SWTOR. As the season progresses, a catch-up system will unlock, allowing players to spend in-game credits to catch up on season levels. Additionally, players may spend Cartel Coins at any time to jump ahead in progress.

The primary avenue of earning Galactic Season Points, however, comes through Daily and Weekly Priority Objectives, so let’s go more in-depth on what these entail.

Each week, the Priority Objectives will shift from one region of the galaxy to another, and objectives will be relevant to the planets in that region. Sprinkled throughout each week are specialty requests from the new Kubaz Companion that this first Galactic Season is centered around: Altuur zok Adon. These missions require the player to tackle Priority Objectives that include locating and defeating Insectoids. After five weeks, the cycle starts again with the Week 1 objectives. Below is a listing of all potential Priority Objectives players could get for each of these weeks:

Week 4: Seat of the Empire

Now that we’ve discussed how players can level up through Galactic Seasons and the potential Priority Objectives, let’s answer what a lot of people want to know: what are the rewards?

In addition to these rewards, Subscribers will also be eligible for even more rewards via the Subscriber Reward Track! Here is a complete list of all the rewards available through this additional track:

(Pictured above is the entire Altuur’s Ornate Weapon Set. Players will receive duplicates of items that can be dual-wielded.)

(Pictured above is the entire Altuur’s Exquisite Weapon Set. Players will receive duplicates of items that can be dual-wielded.)

(From left to right: Subterranean, Arid, and Albino Teithek Mounts.)

Jaleit Nall, one of the two new Galactic Seasons vendors, features classic and previously unobtainable promotional rewards with a few new things sprinkled in, such as the Carrick Station and Vaiken Spacedock Penthouse Strongholds! Everything available from this vendor can be purchased with the new Galactic Season Tokens earned through the two Seasonal Reward Tracks. Jaleit Nall’s inventory will rotate over time, ensuring that players always have something interesting to work toward.

While the Season is underway, Subscribers will not be eligible to purchase items from Ki’at Thavo to help prevent accidental purchases of rewards they can earn later from the Subscriber Reward Track. Once the Season concludes, Ki’at’s inventory will open to everyone, giving Subscribers the opportunity to purchase rewards they might have missed out on. Ki’at Thavo’s inventory is Seasonal, and will completely refresh with all new rewards at the start of Season 2.

(Pictured above is the entire Altuur’s Ornate Weapon Set. Players will receive duplicates of items that can be dual-wielded.)

How much can I level up Altuur zok Adon?

How can I level Altuur zok Adon outside of Galactic Seasons?

I got Altuur zok Adon to Rank 50 Influence on my main character, but what about leveling him on other characters?

Will I be able to get both of the new Fleet Apartment Strongholds during this Season?

That’s it for the in-depth review of our first Galactic Season: The Stranger from Kubindi. We broke down how to level up through the Season, what Priority Objectives players can expect to encounter, and most importantly, what cool rewards are up for grabs! This system will officially be live following the launch of Game Update 6.3 “The Dark Descent” tomorrow, April 27th.