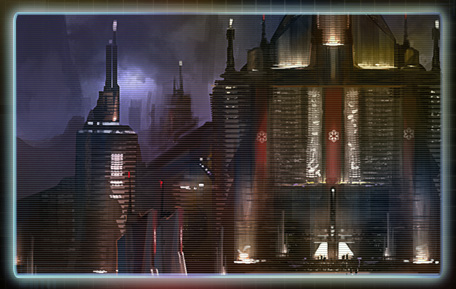 Determined to dominate the galaxy

The true origins of the Sith remain shrouded in mystery. The Sith race was, in fact, largely unimportant until three thousand years ago, when Dark Jedi exiles arrived on Korriban and subjugated the Sith beneath their rule and their philosophy.

As the years passed, the Dark Jedi intermarried with those they ruled, and within generations, the word “Sith” took on new meaning. This powerful new civilization began expanding rapidly, led by a growing population of ambitious dark Force-users. Fifteen hundred years ago, the Sith civilization’s boundaries reached the Republic, and the Great Hyperspace War began.

Dark Lord of the Sith Naga Sadow led his armies in an aggressive campaign to destroy the Galactic Republic. Though the Sith were successful at first, the Jedi Order rallied back to defeat their dark counterparts, systematically destroying the Sith civilization on Korriban.

Unbeknownst to the Jedi however, the last Emperor of the Sith managed to escape the carnage and fled into Deep Space with his most trusted Dark Lords.

These surviving Sith began rebuilding their society on a distant planet, hoping to one-day return for revenge.

Over the course of the next thousand years, the Sith Empire recovered its strength. The Emperor developed a massive Imperial military, a fleet of advanced warships, and undertook dark rituals which prolonged his life and his undisputed rule.

When the time for vengeance arrived, the Sith began infiltrating star systems in the Outer Rim, sowing seeds of discord and making secret deals with local criminals and warlords. With all the pieces perfectly in place, the Sith launched an enormous offensive which caught the Jedi completely off-guard. In the first wave alone, the Sith succeeded in seizing control of several star systems in the Outer Rim, destroying the Republic’s shipyards in the Sluis sector, and strangling the popular Rimma Trade Route.

After the initial crush, the Emperor’s brilliant strategies continued and the brutal force of the Imperial military slammed the Republic time and time again, from the deep sinkholes of Utapau to the tall forests of Agamar. Though it seemed the Empire was capable of waging war indefinitely, the Emperor surprised the Republic yet again.

Destroying the Jedi Temple and holding the planet hostage, the Sith left Republic leaders no choice but to surrender several outlying star systems by signing the Treaty of Coruscant.

Since the treaty, the Emperor has withdrawn to pursue his own mysterious goals, deferring control to the Dark Council, and setting the stage for a brutal power struggle. In the political vacuum, the strongest and most cunning Sith and Imperial leaders are rising up to assume authority, consolidate the Empire’s dominion and crush its enemies.