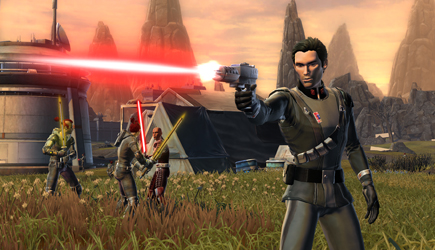 We have now opened an official thread for that week’s Q&A, which will stay open until 2pm CDT on May 22nd, 2012 (12pm PDT/3pm EDT/8pm BST/9pm CEST/5am AEST). We welcome your questions in that thread and hope you enjoy the answers below.

*WARNING: slight spoilers ahead for the Sith Warrior storyline*

Spiritphoenix: Why is Jaesa Willsaam the only companion with a light and dark side variant?

Alex Freed (Lead Writer): While all companions react to a player's choices and personality, Jaesa is a unique example in that she is, effectively, two companions in one. The light and dark versions of the character have completely different dialogue, affection responses, missions, and so on - there's as much different content between Jaesa “light” and Jaesa “dark” as, say, between Pierce and Broonmark.

As to why we didn't do this more often: Jaesa's circumstances are unusual, and her situation is the climax of the entire first chapter of the Sith Warrior story. It's a huge moment and, as a consequence, we felt it deserved a huge payoff with major repercussions depending on your choices. No other Companion Character has quite the same amount of buildup, or made sense to have such a drastic personality shift - and given the amount of time and effort needed to develop a separate version of the character, it seemed more sensible to expend that effort on new and different companions.

nakomaru: You have mentioned DPS, healing and tanking "targets" as objective methods of balancing the roles in the game. Are there hybrid targets (e.g. healing & dps spec) as well? It seems some hybrid specs are viable on certain classes and out of the question on others. I suppose this has to do with objectively balancing lower tier skills across the classes.

Austin Peckenpaugh (Senior Designer): Yes and no. In your example of a healer and DPS hybrid, by and large, whatever damage you sacrifice you should pick up in healing. For example, if you gave up 10% damage, we'd expect you to pick up 10% healing. Sometimes that's the case, but sometimes you lose or pick up synergies that move you above or below an even shift. Because "hybrid" in our skill trees means "virtually any combination of points," it's certainly not the case that we have targets for every combination. However, we do have expectations, and we're happy with hybrid builds so long as they don't radically stray from our expectations.

Freeborne: Alacrity as a stat seems to be encouraged in "Energy Based' classes (Troopers/Smugglers) through our talent trees. However, Alacrity seems to be a terrible secondary stat for us. The faster we use abilities, the faster we lose our energy - and the less energy we have, the less energy we regenerate. Are there any plans to review Alacrity, or at least its place in some class talent trees?

Austin: I agree. We're exploring ways of improving Alacrity that we hope to get working for a future Game Update. As much as I'd like to, I can't provide details on this plan yet. It's possible that we'll address passive Alacrity boosts in the skill trees, but those changes need to be solid and work for the long haul; it would be unacceptable to have a ‘temporary’ skill in place that we planned on removing at a later date.

Deewe: With the locked companion specs, some of us feel like being forced to use specific companions versus choosing them for their personality and look. Is there in the works any kind of feature mitigating this issue (hint: companions kits)?

Daniel Erickson (Lead Game Designer): Companions in BioWare games have always been fully developed characters with their own backgrounds and skills. While you can change between a couple different approaches with each, we do not presently have plans to make Companion Characters interchangeable.

RKLimes: I recall a developer post indicating the results of transferring a character with a Legacy from one server onto another where a Legacy also exists, the highest level legacy would simple be applied rather than added. Since higher Legacy level does not necessarily equal greatest number of Legacy unlocks, will any and all unlocks be granted from either Legacies, or only those of the highest?

Daniel: Legacies will be merged in the most advantageous possible way for the player. They’re your rewards, you earned them, we don’t want to prevent you from moving them wherever you like. So any unlocks gained by the character you’re moving will come with that character, even if the Legacy they are moving into is a lower level.

Rickety: I'm currently the Division Captain for The Old Republic within The Older Gamers community. I am responsible for multiple guilds spanning all three regions. Several of our guilds have issues with the current guild limit of five hundred Characters. Are there any plans to increase this limit or alternatively, to introduce an in game 'Guild Alliance' system?

Damion Schubert (Principal Lead Systems Designer): We've definitely talked about an ‘Alliance’ system, and even thrown around a basic design. This feature is lower in priority than some other guild needs, though, that were identified at the Guild Summit.

Gidoru: Currently in Huttball, certain classes have huge advantages, to the point where, without them, you have a considerably lesser chance of winning. The classes I speak of are namely Sages, Guardians, and their Imperial counterparts that are able to leap and pull across the map granting great mobility. Any chance of changes that prevent the ball carrier from using abilities like leap or being pulled?

Gabe Amatangelo (PvP & Endgame Designer): It is something we considered early in development of the map. However, we aimed to ensure every class had a role as opposed to effectively turning classes off when they carry the ball. Granted, some of those roles are not as obvious or have a steeper learning curve than simply getting the ball over the line (i.e. controlling the middle, cover defense, controlling hazard lines, etc.). The team composition win ratios suggest those roles are playing out for the most part. For example, teams with all Sages and Guardians do not even appear in the top 100 win ratios and the composition with the highest win ratios include a fairly even distribution of Advanced Classes. That, of course, is not an absolute conclusion, especially considering full team compositions rely on matchmaking. We’ll pay close attention to the variance in composition win ratio considering rating when full team queuing is enabled.

ZeusThunder: Why were the vendors removed from Warzones? They seemed to be harmless and the community didn't appear to mind them.

Gabe: A number of players would queue up for a quick vendor/repair and leave the match to go back to whatever else they were doing. This impacted enough matches that the cons started to outweigh the pros. We plan on getting tech to disable the sell and repair functions on a vendor, at which time we’ll be able to justify turning them back on for those players who want to purchase consumables mid-match, etc.

HoboWithAStick: What is the reasoning behind letting some classes have moddable offhand items but not others? I find this to be a little unfair to those of us who mod absolutely every piece of gear possible to obtain the best results.

David Hunt (Systems Designer): It’s due to arcane technical details. There’s no direct design reason, although there are some awkward situations and implementation details to address. We’ve been talking about options for how to fix the inequality between offhand items recently, and we’re about to start R&D on a potential fix.

Paladinnight: I am wondering why the decision was made to allow PvP crafters the ability to buy the schematics for the PvP orange gear, versus obtaining the schematics similar to PvE players which are forced to play the reverse engineering game in the hopes of obtaining a schematic. This decision has resulted in an economy that the only crafted orange boots and gloves require the buyer to PvP. Could we possibly get schematic boxes purchasable via credits (or Black Hole commendations) added to the vendors? If this is not possible, can we at least be allowed to reverse engineer the Black Hole gear instead of only Campaign gear?

David: In either PvE or PvP, you need to consume a certain amount of that content to gain the appearance associated with the highest level gear. PvE and PvP will never have identical distribution mechanisms because of their inherently different progression. The PvP boxes were necessary to ensure that PvE gear wasn’t the best PvP gear due to the augment slot gap. In Game Update 1.2, this means there’s the inequality you mentioned for obtaining orange boots and gloves. There are ~75 new orange PvE hand and feet schematics in Game Update 1.3 (each). We can’t make schematic boxes for Campaign items, because it would conflict with the reverse engineered versions of those items.

I’d like to allow any gear to reverse engineer for discoveries, but there’s a limit to how many recipes players can acquire. We’re looking at ways to improve that and apply systems more universally, but it’s not currently possible. Only Campaign can be reverse engineered because if we make both a Campaign and Black Hole a reverse engineering recipe, they will be the same result with different names but they will both count against the upper limits.

Wookieluva: In a previous Q&A it was stated that there will be a way to add augment slots to existing items! I like the idea but was wondering about how it is planned to put it in. Would it be by adding a crafted item to the armor? Or would it be put in by some long-winded quest? Or both?

David: Adding an augment to an item through the augment table will require an augment kit and credits. The kits can be traded and are created by crafters. Reverse engineering crafted items will give you the materials required to create augment kits. You can also see other previously answered questions and my answers in regards to this topic here.