We’re happy to feature yet another member of our Content Creator Program! Our Content Creators are players who create walkthroughs, video, guides, and entertainment for fans of Star Wars: The Old Republic. For this installment, we chatted with Twitch streamer, Kogass, to talk about his journey into streaming and hosting PvP tournaments. 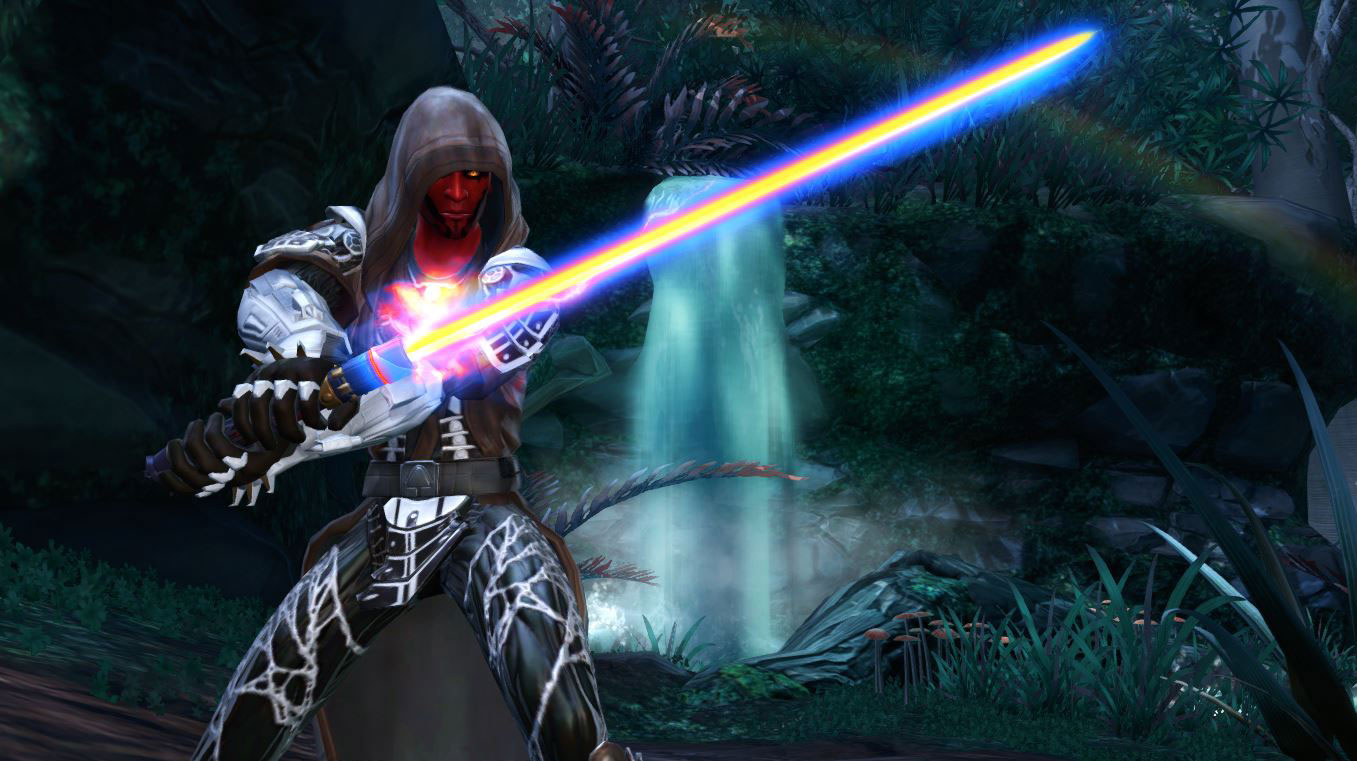 I stumbled onto the scene years ago. I was running a lot of Nightmare raids and Ranked PvP. I wanted to branch out; however, I did not want to learn a new Class. Instead, I started streaming. I would stream randomly and just kind of go with it. If I played, I streamed.

I really got into content creating when I was approached to host a 1v1 tournament. One of the hosts couldn’t make it, and I was contacted twenty minutes before the start of the tournament. From there, I worked with several people over the years to host tournaments.  We held tournaments across the galaxy, from Nar Shaddaa to Manaan, and finally settled down on the Rishi stronghold because of the PvP area. It’s such a great addition to the Stronghold where we can use cameras to observe matches, as well as use PvP stims and adrenals. A few of them are on my YouTube channel for people who missed them. I would love to see other Strongholds get PvP designated fighting areas.

What got you into playing SWTOR?

I first heard about SWTOR when it was still in early development in 2009. I was keeping an eye out for it, but I didn’t follow it closely. My best friend, on the other hand, was keeping tabs on the game and did as much beta testing for the game as he could. He really loved the game.

He told me that if there was going to be a game that I would enjoy, it was going to be SWTOR. I started as a Juggernaut tank. He played a Powertech tank, and we wreaked chaos all over Dromund Kaas. It was a blast. However, I was stationed in Italy, and the time zone difference made it difficult to play together.

I got drawn into the Sith Warrior story, and it was phenomenal. I remember texting my best friend on Nar Shaddaa and saying I’m going to pretend to be nice and then betray everyone (spoiler: I did just that muahahaha). I kept playing the story, and I enjoyed it a lot.

What’s one of your favorite memories of playing SWTOR?

I vividly remember clearing Explosive Conflict’s Hard Mode when it came out. There were so many things that we didn’t have that we take for granted now in-game. For example, Class buffs were only available to the Class that had their buffs. Legacy unlocks for the other buffs didn’t exist back then. We had to make sure we had all four core Classes for the raid. I was a tank, and we had to jump to show we were ready to pull the boss. Ready check was not out by then.

My raid team didn’t look up any mechanics, and we worked on the fight for several days. We would get a little farther each pull, then wipe to something crazy we never saw before. We would chat and figure out how to deal with it and then move forward. Little by little we started to get more and more. When we got the kill, the excitement was huge. We were all cheering, and it was so much fun.

I have met up with people I cleared the fight with, many years later. When I cleared the fight, I was in Italy, and after I came back to the States, I traveled to Milwaukee, California, and Seattle, solely to meet up with guildies. I have some lifelong friends from that experience.

You are rather well-known in the PvP community. Why did you decide to focus on creating content for this part of the game?

I really wanted to shift my focus to Ranked PvP by saying, “Hey, I queue for Ranked PvP, and if I can do it, so can you.” It is a trial by fire section of the game. It’s stressful, and there is a lot to learn. Players get really invested in their toons for Ranked. Whether they are going for a specific tier or want to win a match, players have a goal they are going for and want to reach that goal.

I want to show that it is okay to not be the best and still queue up. I also want to be a source of information for newer Ranked PvP players.  A starting spot to help players get better. I have seen several players go from doing poorly their first week or two of matches, and  later down the line, they improve a ton. It is wonderful to see people improve, and that’s what I want to inspire.  The more people who play, the better it gets. Streaming and playing PvP in this game is really a ton of fun.

Lastly, what are some tips or advice you would like to give to players who want to dive into PvP?

I think the best way to look at this is to break it down into different segments: understand your character, then understand the environment.  Try your best to find information on your Class and Advanced Class in PvP. Some Advanced Classes do better than others and are stronger in PvP. Get the right gear and tactical item. Learn a good rotation, know your defensive cooldowns for your Class, and lastly, have utilities picked specifically for PvP.  If you really want to learn a lot, practice dueling with friends.

Don’t worry about being lost your first month in Warzones. There is a lot going on. There are nodes that count for points, there are speed up buffs, damage buffs, and health nodes around the maps. There are vents (weeee), acid, and fire traps in many maps. Enjoy the game--it is a lot fun.  You will make some great friends along the way.

We want to thank Kogass for taking the time to have a chat with us, and we hope readers enjoyed this interview with another member of our Content Creator Program!