Welcome to the Digital Expansion: Rise of the Hutt Cartel and Game Update 2.0: Scum and Villainy 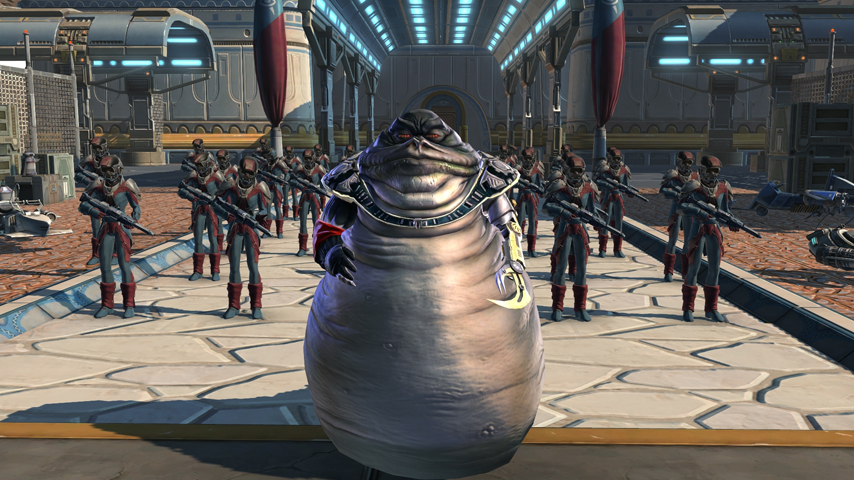 Hello again, my favorite Force acolytes! Today we are a proud studio having delivered what we believe is our most ambitious update to date: our first Digital Expansion: Rise of the Hutt Cartel and Game Update 2.0: Scum and Villainy. This update is a big one – it centers upon the new story planet of Makeb, but also includes an increase in the level cap, all-new mission types, and a new major systems such as Achievements.

Makeb is a planet highly contested in the intergalactic war due to an abundance of an all-important resource known as Isotope-5. Realizing the value of Isotope-5, the Hutt Cartel has moved to gain a stranglehold on this rare resource and broker their own position in the conflict between the Empire and the Republic. Players who land on Makeb will find quickly that they are key players in this conflict with the Hutt Cartel. In storylines that are unique per faction, intrepid adventurers will be able to insert themselves into the action, take on the Hutt Cartel, advance the interests of their faction, and even determine the fate of Makeb itself.

I am particularly proud of Makeb. It is a huge and staggeringly beautiful planet, and is in my opinion a worthy addition to the Star Wars™ universe. In particular, the storyline that the player will face is truly the most impactful and epic story we have delivered.. Beyond this, in most aspects of the planet’s design, you can definitely see the progress that we have made as a studio in building great BioWare storytelling in our engine. In particular, the cinematics on Makeb are by far some of our most eye-popping clips to date – be sure to take the time to enjoy them!

Players with level 50 characters who purchase Rise of the Hutt Cartel will find that their characters can start moving up level ranks again – five new levels have been added to the game. This will allow players to get a sense of progression as they explore the world of Makeb, and use the new Macrobinoculars and Seeker Droid features.

As part of the level increase, all of the skill trees were reworked to account for the increase in available skill points. Your skill trees have been refunded to you so be sure to re-spec your skill points before you charge out into the field! Also, each advanced class was given a new active ability. With reworked skill trees and a new active ability, it is very likely that your classes’ ideal power rotation will have changed – be sure to hit the training dummy to experiment.

The increased level cap is only available to those who purchased Rise of the Hutt CartelPlayers who opt not to purchase will find that they still have the same Flashpoints available,. All existing Flashpoints and Operations will now drop improved gear (in some cases, significantly so). At level 55, four new Hard Mode Flashpoints will be available in Group Finder, as well as two Operations – Terror From Beyond, and the newly-released Legions of Scum and Villainy.

We have also adjusted the PvP Warzone queues – they are now divided into three brackets: 10-29, 30-54 and 55. On top of this, we have significantly reworked Bolster to reduce the barrier to entry in Warzones at level 55. The power gap between Bolster and the best equipment is still respectable, but you can now queue up at 55 and be competitive without picking up entry-level gear. Recruit gear has been removed, since there is no longer a need for it.

This update also includes an all-new Achievements system. Starting in Game Update 2.0, players will be able to earn Achievements for all sorts of activities in-game, including crafting, exploring and unleashing their wrath on the world around them. Over 1,900 Achievements are in this release, and we see the system as a great way to add more, and more varied gameplay in future updates. Achievements can also grant rewards such as titles and in some cases Cartel Coins.

We decided to make Achievements Legacy-based, which means that players only need to accomplish an Achievement on one character on their Legacy to unlock it across all characters. This allows us to make Achievements for the things that we thought were important to reward in a BioWare game – completing the class stories, for example, or earning the affection of each individual Companion.

One of the initiatives that we wanted to take on in this Digital Expansion was to increase the kinds of mission activities to be found in-game. In particular, we felt that we wanted more exploration. The planets of Star Wars: The Old Republic are huge, expansive and beautiful, but we don’t have enough game systems that nudge players off the beaten path.

Macrobinoculars and Seeker Droid were designed to serve exactly this goal – at roughly level 52, players will be invited to go on a mission that will grant them Macrobinoculars and Seeker Droid technology, as well as unlock access to unique storylines and new daily missions, some of which send the player back to classic planets like Tatooine and Hoth. We think that players who fancy themselves explorers will find their playstyle rewarded if they choose to explore this gameplay path, as they discover ultra-rare items with their Seeker Droid and earn Reputation with a new organization link Galactic Solutions Industries on Nar Shaddaa .

Many other improvements and minor features were added as part of Game Update 2.0. Among other things the player will see:

All of this, and a lot more, await you inside of Game Update 2.0: Scum and Villainy and the Digital Expanion: Rise of the Hutt Cartel. The team has been working very hard to bring all of this to you, and all of us are extremely proud of the final product. One of the most gratifying parts of working on MMOs is that we’ll be right there with you, playing the expansion that has been the fruit of our labors over the last year. We can’t wait to see you in the game!

May the Force™ be with you,