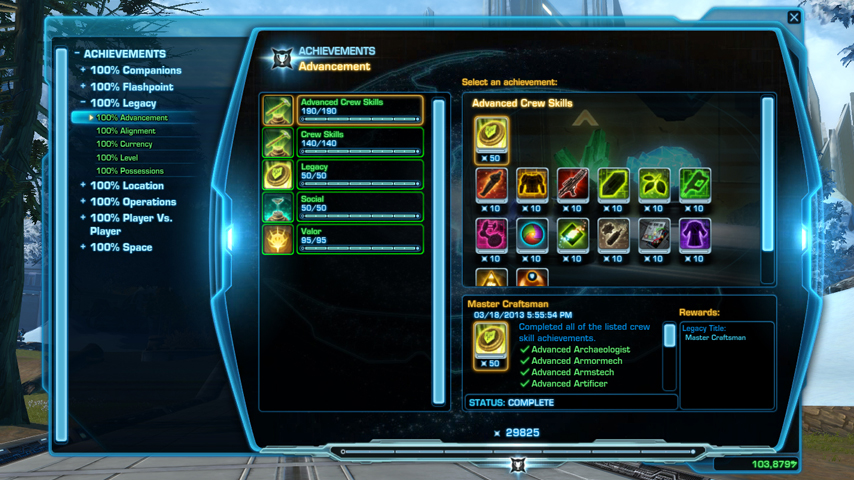 Achievement Completed: Breaking the Writer’s Block. Description: Wrote the first sentence of my developer blog. This achievement doesn’t reward me with a title, but it does increase my Galactic Reputation with the Community Team, so I’ve got that going for me!

Game Update 2.0: Scum and Villainy introduces the Legacy Achievements system, a means of recognizing important accomplishments and milestones for your entire Legacy. Achievements are like badges awarded for completing content, defeating enemies, exploring new regions, and a whole lot more. The Achievements you gather are displayed in a new section of your Legacy panel, where they can be viewed by other players to see how much you have accomplished with your Legacy.

What sets Legacy Achievements in Star Wars™: the Old Republic™ apart from similar achievement systems in many other games is that actions from all characters in your Legacy contribute to your Legacy Achievements. Need to discover and dance with 100 kinds of womp rats on Tatooine? No sweat---dance with 50 of them with your Scoundrel while he is on the planet and then go dance with the other 50 later with your Powertech. Your progress is tracked across both characters and the Achievement and its rewards are available to all characters in your Legacy. So you are always contributing to the same set of Achievements and rewards regardless of which character you are playing.

Every Achievement has tasks that are required to unlock it, which are displayed in the Achievement description. For example, the Master Craftsman Achievement requires you to have hit 450 points with each crew skill. As you complete tasks in the list, they will be checked off and will display as completed. When all tasks on the list are complete, the Achievement is considered completed, and a banner will display on screen letting you know that you have finished it. If you belong to a guild, all guild mates will receive notification of your accomplishment in the chat window, with an option to click on the linked Achievement and find out more about what you accomplished.

It is important to note that we never take Achievements or Achievement progress away---if you complete part of an Achievement that asks you to reach Light V alignment with a character, and then make a turn to the dark side with that same character, your Achievement for having hit Light V is not revoked. If, however, the Achievement specifies that you need to dance with 100 womp rats while you are Light V (apparently our example user is a prolific at dancing with womp rats), you will need to maintain that Light V status while you progress the Achievement.

You may view another player’s Achievements at any time by right clicking their portrait in-game and selecting Additional Commands -> Inspect Achievements. You will be able to fully browse their progress in any category, as well as see their overall Achievement score and any recent accomplishments they’ve achieved.

All Achievements reward the player with Prestige, a score showing the combined value of your completed Achievements. Any player inspecting your Achievements can immediately see your total Prestige and get an idea of just how much of the game you have completed and explored.

What Achievements Will I Have on Day One?

On day one, we will automatically grant Achievements for everything that can be easily verified and tracked on your character. Any quests you have completed, codices you have found, items you have, pets or vehicles you have collected, or levels you have attained will all be counted towards immediately updating your Achievement progress. You will likely find that you have many Achievements already when you log in to Game Update 2.0 for the first time.

Sadly, we cannot track every single womp rat you have ever danced with, nor every Jawa you’ve bested in combat. Achievements related to defeating enemies or players will not update automatically on day one, but will start keeping score as soon as the update is live.

Something Doesn’t Add Up!

Players on our Public Test Server (PTS) have noticed that the point totals for each Achievement category don’t necessarily match up with the visible point totals for all Achievements within those categories. You are quite correct! The numbers do not always add up. Maybe there’s something hidden waiting to be discovered…

Additional Legacy Achievements will continue to be added with future content in Star Wars: The Old Republic. New regions, Flashpoints, Operations, and content of all kinds will have new Achievements in the future with new rewards for you to collect. The initial set of Achievements delivered with Game Update 2.0 comprises more than 2000 individual Achievements and nearly 30,000 Prestige points to collect. We are looking forward to expanding the types, complexity and range of Achievements that you can earn, We plan to continuing to push the Achievement System further to encompass every part of the game now and every part of it going forward. 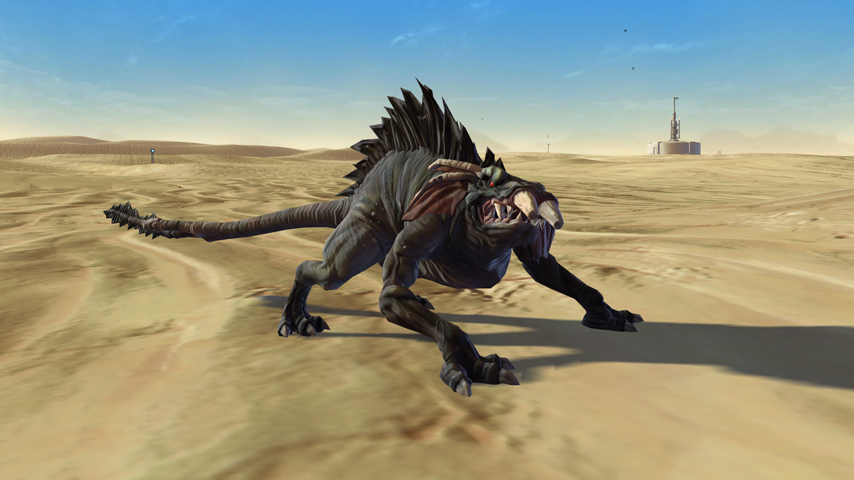 Now if you’ll excuse me, I have some womp rats to dance with.