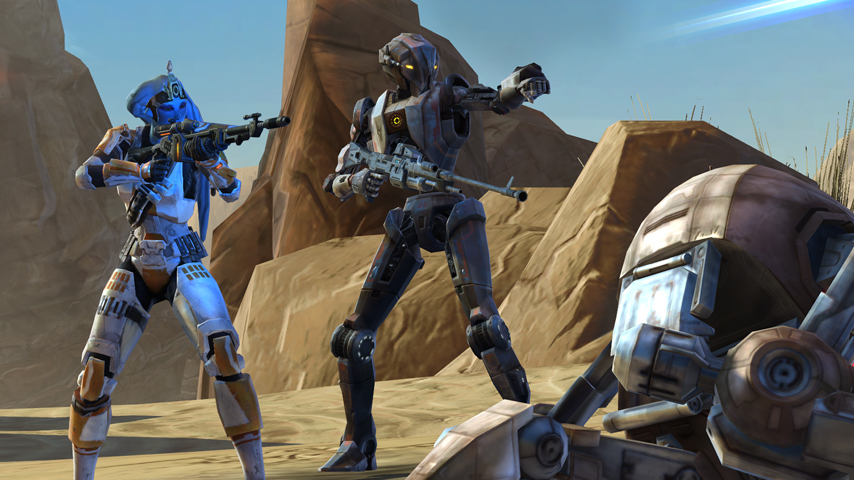 Recent planetary exploration on Belsavis has uncovered the following classified intel from the Czerka Corporation regarding a new High-Efficiency Assassination Droid.

Imperial assassins spend years training to develop the steel nerves required for their work, but the HK-51 Droid comes with such features pre-installed. Like the previous models in the HK line, including the legendary HK-47 of the Jedi Civil War, the latest model is hard-wired for hunting and killing. HK-51 turns the work of elimination into an art form. He performs his tasks with ruthless efficiency, with no thought for earning credits or achieving fame and glory. To HK-51, organics are primarily targets; there is no value in courting their approval. The only exception to this rule is for the lucky man or woman who he calls “Master”. HK-51 is programmed with complex fail-safes that place loyalty to his Master at a much higher priority even than self-preservation. 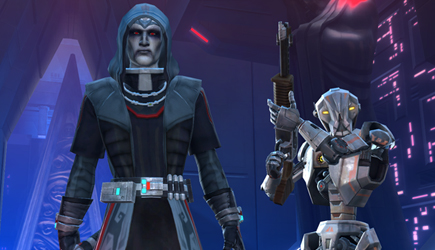 Though the HK-51 model is outfitted with all the features of his predecessors, several upgrades are also included in the package. Practical use suggested that overly-ambitious engineers may have programmed previous HK models to be a little too bloodthirsty. Make no mistake—the HK-51 model still relishes violence in all its forms, but efficiency is now its guiding directive rather than brutality. Field tests have proven that the HK-51 model is far more reliable and effective in combat due to these upgrades. Despite the emphasis on efficiency, HK-51’s primary directive is still to eliminate his target at any cost. When all other options fail, HK can activate a self-destruction charge to eliminate both himself and his target, ensuring a completed assignment.

As useful as the HK-51 model would be to both the Republic and Empire, acquiring one of these Droids is currently believed to be impossible. The last known HK-51 Droids were lost during the Great War, when an Imperial starship carrying a battalion of them was shot down over the ice-encrusted wastelands of Belsavis. Even if these models are discovered, they would undoubtedly have been rendered inoperable after spending so long in such extreme conditions. Constructing new HK-51 Droids became impossible after unidentified saboteurs erased every copy of the Droid’s design schematics from Czerka Corporation’s computer network. The only HK-51 data files rumored to exist it were allegedly aboard an experimental Czerka mobile research lab known as the Theoretika. The vessel vanished during a routine hyperspace jump decades before the Belsavis incident and sabotage of Czerka’s archived schematics. Czerka spokespeople have publicly stated that even if the long-lost Theoretika were to be located, it should be destroyed immediately. Whoever was on board is undoubtedly dead and the ship now represents far more of a threat than an opportunity.

Unsurprisingly, there are many who question Czerka’s credibility on this matter. There are certainly those who would be willing to take any risk if it meant possessing an HK-51 assassin Droid. The value of the HK-51 technology is considerable and the tactical advantages available to someone with such a companion at his or her side are astronomical.