With each Fan Friday, we feature creations from some of the clever members of the Star Wars™: The Old Republic™ community. This time around we’re shining the spotlight on some of the incredible artwork done by our fans.

Be sure to check out this month’s Fan Site Spotlight where we talk to Chimaera, a great French site dedicated to bringing you the latest from The Old Republic.

Also, we compiled a number of images from the “Return” cinematic trailer for you to download and use as your desktop wallpaper.

Writers and artists from all corners of the world have drawn inspiration from Star Wars over the past three decades. Our community has contributed many of their own works and with each Fan Friday we highlight some of the impressive creations from members of our passionate community! 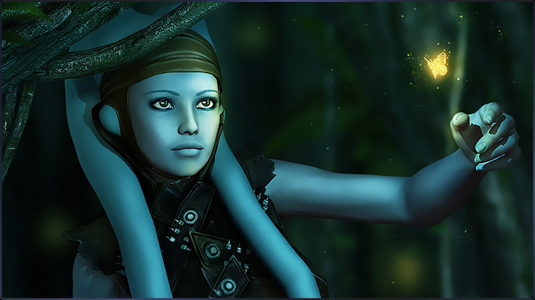 In the aptly named “Twilek” thread, community member JenFX created this stunning render of a young Twi’lek woman lost on the forest moon of Endor. 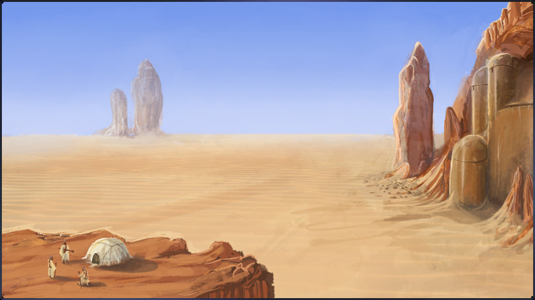 Inspired by our Tatooine Developer Walkthrough, forum member Alliant painted this stunning environmental view of Tatooine’s barren desert as well as other paintings inspired by the iconic world for his “Tatooine Sunday!” thread.

Alliant also created a series of awesome iPhone and iPad wallpapers to allow everyone from the noblest Jedi to the most insidious Sith to represent their faction on their mobile devices!

This month, we’re proud to feature our first French Fan Site Spotlight: Chimaera. Originally created by two passionate fans of Star Wars, this little project evolved and today it is an active community fan site with great coverage of the game. If you have a chance, take some time to look at their site and their upcoming projects, including podcasts, in-game streaming after the game’s release and more!

How was the Chimaera Guild formed?

Our community was formed after a meeting of two people. We (Kaes and Vorlox) had known each other in the past, but were both managing two different communities at the time. When The Old Republic™ was announced, we wanted to be with the game when it was released and, as luck would have it, we met around a forum. We talked about it and realized we had the same objectives and aims. We then started Chimaera in June 2009 essentially with a phpbb forum and no more than five members.

How has the Chimaera Guild evolved since it was launched?

The guild has changed a lot since it was first created two years ago now. We began recruiting people fairly slowly. Over the months, and as BioWare released more information, our core membership started to grow until we reached the number we have today, which is mainly made up of people who have been with us from the start or for at least a year.

We then also decided to develop our portal as well as our content. So we redesigned our website and used it to develop the editorial and community aspect. We went from "basic" guild status to a community. This means we can share lots of stuff with some members of the French community who visit our site or follow us on Twitter.

Then we also had our "wall of crazy" with a bunch of projects like a podcast, in-game streaming via our Dailymotion network, written or video guides and a whole load of other things. Now all we need is the game and some people to develop these projects!

What is the structure of the guild and what are the objectives regarding Star Wars™: The Old Republic™?

Currently we want our structure to stay fairly simple and with very few members at the moment. The guild is managed by two people (Kaes/Vorlox) and we have recently brought in a member as a manager responsible for recruitment to make it easier to hire people, as we're spending a lot of time looking at the applications, and we have quite a few of them!

In the long-term we should evolve to have more officers and to set up master classes, but we want to wait until we can put the right people in the right places.

What is the aspect of The Old Republic community that you like best?

What we like most about The Old Republic community is seeing the level of commitment. So many members give their time and get involved, whether it's translating a message from Georg Zoeller or Stephen Reid for example, or an article in an American, German or French magazine, or the various people who run fan sites.

Lots of people follow game news very closely, and want all the latest info. We were made particularly aware of this when we organized a live chat during E3 last June. We had a day when there were over 100 French people chatting and looking at the available lives late into the night. OK, it gets a tad chaotic when there's such a big crowd of you, but it was great to follow the show in such a terrific atmosphere.

What is the most important thing you need to know about managing a fan site?

We haven't been doing it for that long, but with the little experience we have, one thing we can say is: running a fan site takes time. A massive amount. It's quite usual for one of us to stay up until one or two o'clock in the morning to finish an article or translation, especially during the games shows like E3 or GamesCom. You really have to be passionate about what you're doing.

We have seen lots of people create a fan site, only to see them abandon it a few weeks later for various reasons, which is a real pity. That's partly why it's good for a group of you to start this kind of project.

So if you have things you want to share and the time to do it, go for it!

You have recently been able to interact more with the BioWare community team. How do you seen the future exchanges between the French fan sites and BioWare?

We are really pleased that Antonio Moreno is now our French Community Lead. The French community has been looking for someone to talk to direct for a while now. And it's cool that Antonio is on Twitter, like Stephen Reid, and makes himself very available. When we post a message on Twitter to one of these people, we know we'll get an answer, which is something you can't say that often.

Where future exchanges between French fans and BioWare are concerned, we're not about to dis another "Fan Site Summit" or, in any case, more accessible events. Something which is also very dear to the hearts of fans on French sites is somewhere a visible where we can share our articles. For many people the "community creations" section is a place where they can share pictures and stories; lots of people are unaware that fan sites also share their articles and maybe they miss out on something that could interest them.

What are you really looking forward to most in The Old Republic?

Above all we are expecting high-quality content. We already know that the rise in levels is great, but we're looking at the long-term, so it's the high standard of content that will keep us playing the game for at least a few weeks or months. So we can't wait to experience the first Operation, the Eternity Vault, as well as the high level Flashpoints and PvP with or without instances.

But for the moment we just want to play, that's all!

8. Do you want to say something to the Star Wars: The Old Republic community?

While we're here, we'd like to say hello to everyone in The Old Republic community, to all the fan sites that generally do a terrific job, and to our readers and members who we can't thank enough. We've been around for two years now, and hope to keep going for a long time to come!

For those who don't know us already, feel free to come and have a look at our work or drop by our site and say hello. You can also find @GuildeChimaera on the micro blogging site "à tête de piaf".

And finally, thanks in advance to BioWare for this upcoming MMORPG and for agreeing to let us talk to you here.

We have a number of new wallpapers based on the “Return” Intro Cinematic that first debuted at E3!

The first of these wallpapers depicts the young Sith apprentice known simply as Malgus, minutes before he would usurp his master and obtain the title of Sith Lord.

Smashing through a piece of debris, Malgus leaps into the final duel.

The common writing style used throughout the galaxy, Aurebesh serves as much more than simple writings. It works as a bridge of communication that unites species from all corners of the galaxy. Now you can send your own messages in the basic language of the galaxy with these Aurebesh phrases that can be used on our forums.

To use these phrases in conversation, click “More” in the Smilies section on the right-hand side of your screen when writing a new post. Once you’ve done that, scroll down to find the appropriate phrase you want to use and simply click it to insert it into the post.

We want to know what you think! You can find these polls in the Surveys and Polls section of the website.