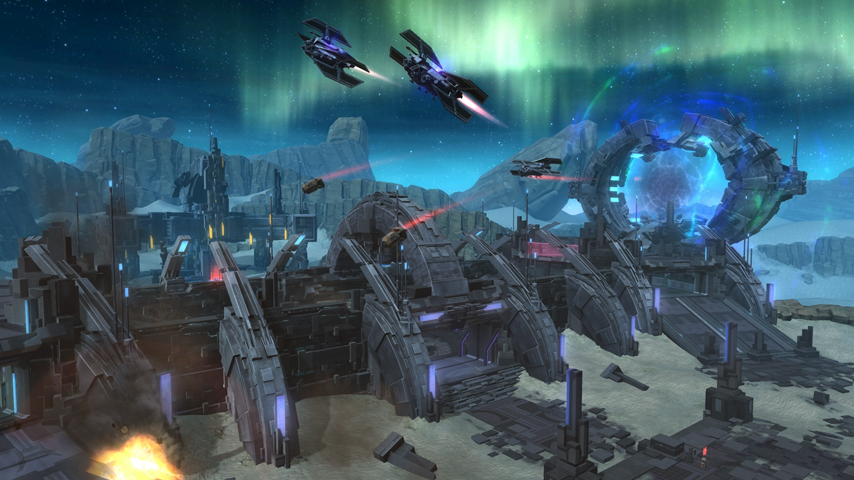 Game Update 1.6 marks the release of the new Warzone: Ancient Hypergate. This Warzone centers upon the control of an ancient ruin built around a Gree Hypergate that offers secrets that both the Empire and the Republic wish to exploit. Players fight for control of energy pylons within the ruins, but occasionally a titanic energy blast will rip through the Warzone, forcing players to take cover and react accordingly. We think this play style will really mix up the Warzone experience with new strategies and tactics required to play and win.

This release also marks the addition of new Heroic Space Missions. These 6 new missions per faction were designed from the outset to offer a truly challenging gameplay experience to the hardcore space jockey. Players will need to be ace pilots with highly decked out ships in order to successfully complete these missions, and they will need to master them to acquire the upgrades needed to beat the challenging bonus objectives hidden within. We expect only the best pilots among you to be able to do so.

And of course, in Game Update 1.6 we are expanding the offerings in the new Cartel Market. First and foremost is the new addition of Lifeday items! Yes, Lifeday is coming to Star Wars™: The Old Republic™ as a celebration and reflection of the holiday season. Of particular note is the Czerka LD-1 Celebrator, a new vehicle that is so ridiculously awesome that it needs to be seen to be believed.

Also included in this Game Update is the Blockade Runner Cartel Pack, a new pack with more than 25 exclusive items available in the Cartel Market. Fans in particular will appreciate new weapons, new Droid minipets, the Light side’s answer to the Domination Throne, and a very cool mask that first made its appearance in the original Knights of the Old Republic. We plan to release these packs more frequently in the future, so you can always look for cool new in-game items.

Finally, this Game Update also happens to coincide with the First Anniversary of Star Wars: The Old Republic. We are extremely proud of the game, and this first year has been an amazing journey for those of us at BioWare and LucasArts. But it really is the players that make Star Wars: the Old Republic an amazing game, community, and experience. And for that, we on the development team thank you.

Rest assured that we will continue to monitor our forums and fan sites, and continually work to improve the Star Wars: The Old Republic experience for all players.